At Baselworld 2010 the German watch brand Nomos from Glashütte surprised a lot of people and irritated others with their brand-new booth. The two-storey construction had an outside staircase, which seemingly had been demolished before the fair had even started. What struck observers even more was that this didn’t seem to bother anybody in the booth. Everybody was beaming at customers and passers-by. Even on the gallery busy people were to be spotted. What had happened? Nomos, for the first time in 16 years at Baselworld, had been allotted a spot amidst the other brands on the first floor of Hall 1. Before that they had invariably been found along the fringes, next to a bar and an emergency exit. However, to be able to move they had to completely abandon their booth and build something new, on two storeys. Brands around them, they were told by the management of the fair, had complained about their booth not meeting the standards of luxury. The demolished staircase was a mischievous nod at the fair’s obsession with regulating the tiniest detail.

A recent history
Can a brand have a sense of humour? It’s pretty rare in the watch industry, but Nomos definitely has one. At the heart of it is Roland Schwertner from Düsseldorf, who founded the brand just two years after the German reunification in 1991. Originally, Schwertner, born in 1953, had nothing to do with watches. The Nomos Encyclopaedia, issued in 2006 instead of a catalogue, mentions that he had been a “freight-forwarder, computer expert, drop-out and fashion photographer and holder of an MBA”. Schwertner did have a good sense of business. The first thing he did was to buy names of watch brands that had been great once upon a time. Later he would give one of them to a business friend who helped him setting up the right contacts with sub-contractors in Switzerland: Günter Blümlein. There was one name he liked particularly. It was Nomos, the Greek word for law. There had been a brand of that name in the first ten years of the 20th century, which had had a brilliant marketing idea, sending watches to famous writers and composers and asking them to give a written response to the timepiece. What the persons in question didn’t know: the brand would publish their letters as advertisements in some of the best-selling magazines.
Communication is something that Nomos has been doing differently from its competitors since its start twenty years ago. Instead of an external PR agency the brand has its own staff of writers, journalists, photographers and graphic designers, most of whom are freelancers.
But let’s talk about the product. Schwertner started off in a rented flat with three local watchmakers. He bought most of the components in Switzerland. German designer Susanne Günther drew the brand’s first model “Tangente”, which has since become an icon. It’s as simple as any child imagines a watch, with its two blued hands, large numerals and almost immaterial case. Before long Schwertner ran into trouble with some of his neighbours who had started off with more capital and were able to produce a significant percentage of the contents of their watches in Glashütte. They wanted to prevent him from mentioning the word “Glashütte” on the dial. 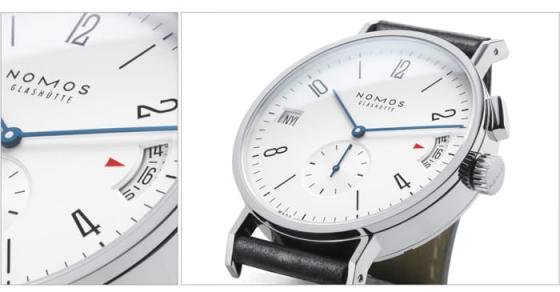 The brand’s special station
Schwertner invariably chuckles when he lets his mind wander to the small beginnings. Nomos has grown into one of the most renowned manufacturers in Glashütte and is proud to have done so without the support of a group and without running into debts. The secret was simply to grow slowly but steadily, without the extravaganzas some other brands spent a lot of money on. According to their Encyclopaedia again the Nomos pricing principle goes like this: “material plus labour and (almost) nothing else”. This is why there are no big adverts to be seen anywhere.
As Nomos started to integrate more and more of its production, the need for space constantly grew. Most of the bigger buildings were already occupied by Glashütte Original and Lange & Söhne. So Nomos went for the railway station that had been closed since the Deutsche Bahn had taken over, and got it. It is now completely renovated and acts as the heart of the manufacture. It contains the offices of the management, the shipping office and the computer controlled machines for the production of base plates and bridges as well as lathes to turn small axles on. The movement design offices are on the first floor, where Mirko Heyne, who gave Nomos its first in-house self-winding calibre, is busy developing new calibres and complications. There’s even an experimental high-end laboratory. Situated up in the station’s signal box it is isolated from the rest of the world to guarantee the watchmakers there the peace their Swiss colleagues find watching the green meadows of the Vallée de Joux. “High-end?”, one might be inclined to ask now. Well, it was Nomos who developed the tourbillon movement for Wempe after all.
As they still needed space for the watchmakers who assemble the movements, test them and put them into the cases, a building at the opposite end of the village that used to belong to a jewellery manufacturer was purchased. It overlooks the entire village and guarantees the watchmakers peace and quiet for their delicate work.

Bauhaus understatement
Nomos watches are characterised by their obvious understatement. Most of the models feature nothing but indications for hours, minutes and a small seconds hand. For years the collection was based on the initial models, the Bauhaus-style Tangente, the square Tetra, the classic Ludwig and the rounded Orion. Changes took place mainly inside the case. Originally the models had been equipped with a practically unchanged Peuseux calibre, which over the years became more and more customised until it resulted in an in-house movement bearing the typical Glashütte characteristics of ¾ upper plate and a specially shaped cock. The first self-winding calibre was launched in 2005 and the first complication – a world timer – in 2010. A new design line was introduced in 2009. It is called “Zürich” because this is the city where the offices of Swiss designer Hannes Wettstein were based. Sadly, Wettstein died of cancer before his model saw the light of day.