“I like places and objects that transform us, that take us somewhere else for a day, an evening or just a moment. I like the romance of films, cars, Cole Porter tunes and Frank Sinatra songs. They all have one thing in common: they are ageless. They are timeless.” – Ralph Lauren. 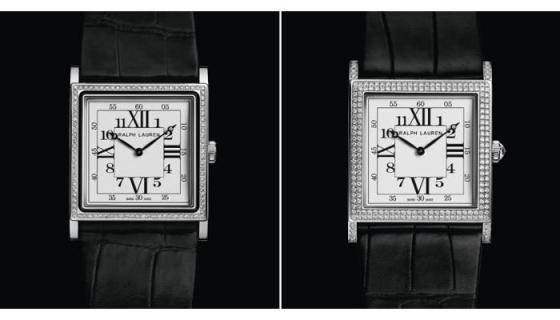 The first Ralph Lauren 867 watch model places a single row of brilliant-cut diamonds on the bezel of the watch, and accentuates them with a glossy black frame that reflects the use of contrasting blacks and whites that characterises much Art Deco design.

With the second Ralph Lauren 867 watch model, two rows of brilliant-cut diamonds adorn the bezel of the watch. Diamonds have also been set into the lugs, and a single rose-cut diamond graces the crown.

Both models feature traditionally crafted silver opaline dials, with domed and strongly defined black Roman and Arabic numerals. Presented in 18-carat white gold, these models come on a black alligator strap with a white gold pin buckle, and both are executed in a classic 27.5mm width, respecting the traditional dimensions of an iconic dress watch. As with the other models in the Slim Classique collection, these watches are powered by an ultra-flat (2.1mm thin) hand-winding movement by Piaget for Ralph Lauren.