The new Luminor Marina 1950 3 Days model presented at the inauguration of this exhibition uses a new movement based on Panerai’s in-house P.3000 calibre launched in 2011. Baptised the P.3001, the manually-wound movement with a 72-hour power reserve differs from the “parent” calibre in that it has a power reserve indicator with 3-day scale on the back of the movement, which is visible through a sapphire crystal case back.

The 47 mm polished stainless-steel case of this new model is, of course, classic Panerai, with the trademark crown protector and minimal markings—oversize 12, 3 and 6 plus hour markers and small seconds at 9 o’clock—on the dial, which is housed behind 3 mm-thick Plexiglas®. The Luminor Marina 1950 3 Days is water resistant to 10 bar (approximately 100 metres). 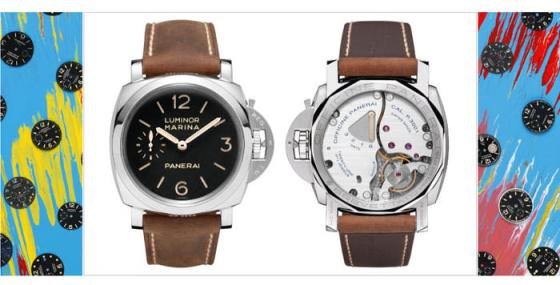 At the same time, Panerai has also revamped its entire advertising, placing its products at the centre but with subtle references that reflect the brand’s Florentine heritage whilst at the same time alluding to its Swiss Made manufacture movements, which can be seen in the background of the advertisements.