It was Blancpain CEO Marc Hayek himself who donned the scuba gear to descend to the bottom of the giant aquarium in the Dubai Mall for the launch of the company’s new extreme watch in October last year. But record-breaking Italian freediver Gianluca Genoni did not need any breathing apparatus to dive with the new watch down to a watchmaker’s desk that had been set up at the bottom of the aquarium among the diverse marine life, including sharks and manta rays.

As the world record-holder for static apnea, having held his breath under water for a staggering 18 minutes and three seconds, it was easy for Genoni to wait with bated breath as Mr Hayek presented the watch to the underwater camera crew. “This kind of launch is something I could otherwise only have done for other divers,” Mr Hayek said after resurfacing. “When I first saw this aquarium I thought I was standing in front of a window on a reef.”

The X Fathoms is a descendant of Blancpain’s legendary Fifty Fathoms diver’s watch, which was first produced in 1953 for French combat diving forces. Over half a century ago this model set the benchmark for the clarity and readability required of a functional diver’s watch, with an uncluttered dial and luminescent hands and hour markers.

After four years of development, Blancpain once again sets the standards in this field, since the X Fathoms offers a mechanical depth gauge that can measure depths down to 90 metres—more than any other watch—and is accurate to within 30 centimetres for depths between 0 and 15 metres.

Amorphous metal is used to make the membrane for the depth gauge, since it has a disordered, rather than crystalline, atomic structure. This metal is more elastic, which allows greater deformation and therefore greater precision in the measurements. Despite this, however, the metal is nevertheless extremely resistant to permanent deformation.

The gauge works when water comes into contact with the membrane through a special honeycomb opening in the case-back (the rubber strap has also been designed to allow water to penetrate through to the case-back), which deforms the membrane and moves a feeler-spindle fixed at is centre.

A transmission lever and a rack convert the linear movement into the angular movement required to move the hands around the depth scales on the dial. With each 0.01 mm of membrane deformation corresponding to a depth of one metre, not even lasers could offer the precision required for cutting the rack and pinion mechanism. The required precision was instead achieved using deep X-ray lithography.

The diver may continue to descend, since the X Fathoms is water resistant to 30 bar (300 metres). As the diver returns to the surface, the two depth hands are returned to zero by a spring, while the maximum depth hand records the maximum depth reached until it is reset by pressing the pusher at 8 o’clock, which is covered by a special protector to prevent accidental operation. 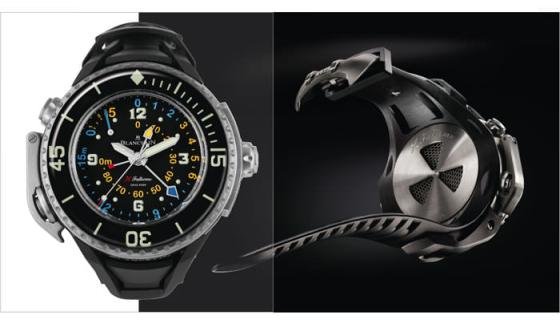 The depth is displayed on two separate scales on the dial, with a more finely graduated scale for 0-15 metres, including separate colour codes for the all important 3–6 metre depths on the way back up, when divers need to decompress before resurfacing.

A separate five-minute countdown timer has also been incorporated into the watch to allow divers to time their decompression accurately. Located in the 10 o’clock position, this is the only counter on the dial to use an off-centre hand, with all other functions – hours, minutes, seconds and three separate hands for the depth gauge, being indicated centrally and read off against highly legible coloured scales.

The Blancpain 9918B calibre that powers the X Fathoms is derived from the manufacture calibre that has been fitted in several Fifty Fathoms models. In this particular configuration, it has been modified to incorporate a new silicon balance spring and its three barrels offer an impressive five-day power reserve. The models presented at the launch were prototypes, with the final production models set to be launched at BaselWorld 2012. Blancpain expects to sell 40-50 of these extreme models per year, at a retail price in excess of CHF 30,000.