Harry Winston and the tourbillons, what a story!


Harry Winston and the tourbillons, what a story!

Harry Winston began telling its own story about the tourbillon in 2009, with its “Histoire de Tourbillon N° 1”. The first story was already complicated since this first model, which has since become part of a veritable compendium of stories, consisted of two single-axis tourbillons weighing 0.46 grammes, inclined at 25º, each making one revolution in 36 seconds. It was an attempt to neutralise the effects of gravity as much as possible.

The second story, told in 2011, is about a bi-axial flying tourbillon. The absence of the upper bridge of the carriage in the model called “Histoire de Tourbillon N° 2”, provides a spectacular scene. The double concentric carriage is housed in a dome which makes a full revolution in 120 seconds, while the inner carriage makes its revolution in 40 seconds. 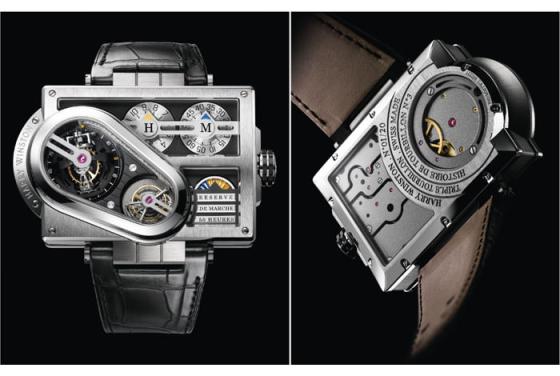 For its third story, which is being told this year, Harry Winston comes on very strong, if we might say, with its “Histoire de Tourbillon N° 3”, featuring a bi-axial double tourbillon whose inner carriage—which supports the balance, balance spring, and escapement—makes one revolution in 40 seconds while the external carriage revolves in 120 seconds. Beside this, a single-axis tourbillon calmly makes its revolution in 36 seconds. The ensemble is connected by a differential “that gives an average of their two rates”.

We can imagine that this must have been a “great headache” for the engineers and constructors, challenged to find the best balance between the rotational speeds, the weights in play, and the effects of inertia and even resonance, without even counting the various materials that Harry Winston likes to work with.

We can also easily imagine the difficulties in finding a way to connect three tourbillon carriages and two escapements in such a very small three-dimensional space. This is what makes the story of the “Histoire de Tourbillon N° 3” so compelling and aesthetically unlike any other. Architecturally, the case is a three-dimensional assembly of 77 distinct component parts composed of Zalium, an alloy of zirconium—which is lighter but harder than titanium—and white gold. The rectangular case, in brushed grey Zalium, is quite angular. The tourbillons are placed in a rounded white-gold container that protrudes above the case and over its sides at 9 o’clock and 6 o’clock. Above and to the right, the hours and minutes are indicated by two rotating discs placed side by side. The indicator for the power reserve (50 hours) in this manual-winding movement is placed in the lower right-hand corner of the case. Its disc is set with sapphires and citrines. The story of this tourbillon, like the others that preceded it, will only be intimately told to 20 people around the world.