François-Henry Bennahmias, the new ad interim CEO of Audemars Piguet, may be young (48 years old), but he knows the brand by heart. Not surprising since he has worked there for 18 years. A former high-level professional golfer, he joined Audemars Piguet in 1994 and started his career in the French market before being sent to Singapore and Malaysia, then notably to Australia. During this period, he continued to have responsibilities over various European markets, namely Germany, Spain, Italy and Switzerland. In 1999, however, he was transferred to the United States to launch the brand in this market where it was in a “bad position”. We know the rest: thanks mostly to strong media efforts and partnerships with popular personalities (Arnold Schwarzenegger, Jay-Z), Audemars Piguet became an icon in the USA. In light of his success, the family “board” of the Swiss brand looked to Bennahmias when it needed to replace Philippe Merk, who was leaving for reasons of “strategic differences.” 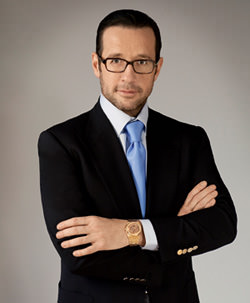 Europa Star: You declared a short time ago that “the brand had rested a little too much on its laurels”. What does this phrase conceal? Was Audemars Piguet in a bad situation?

François-Henry Bennahmias: Upon my arrival, the brand had enjoyed ten years of pure happiness—ten years of development and of opening new markets. Even the crisis of 2009 did not affect Audemars Piguet too much. Sales were down 12 per cent compared to other companies that suffered 30 per cent declines or even more. So, at that time, the feeling was to say: it’s all working, we are there! But this is a dangerous attitude because it tends to make you overconfident, and therefore you no longer question what you are doing. But, one is never “there”. All the more so since we are heading into more difficult times. Yet, difficult periods are interesting, since they force us to be more reactive. No, not “reactive” since that means that you are already late. The right term is “proactive”.

ES: This is a word that does not exist in the French language…

FHB: This is undoubtedly not by chance… But it is this way of thinking that I want to absolutely infuse in all of our teams. We must dare and we must move forward, without fear of being wrong. We can always make a mistake, but the important thing is how fast we can correct this mistake. From this point of view, the crisis offers us an opportunity. It forces us to make the difference, to weather it as well as we can, to be the best possible. The crisis is a wake-up call!

ES: You define your new strategy as being both “a return to basics and an absolute respect for the brand”. What does that mean in concrete terms?

FHB: Above all, it means that we must be quality-oriented in everything we do, in all aspects of the brand—product, distribution, service. Insisting on quality rather than quantity involves a whole series of direct consequences, whether upstream on a purely technical level for products whose reliability must be totally irreproachable, or downstream in our relationships with retailers and end consumers. This has led us to rapidly take concrete measures: resizing our distribution network to offer each of our partners a complete palette of products in sufficient numbers; and pausing the release of new products in order to re-establish the brand in the strongest and most precise positioning. The race to always introduce new products is absurd. Watchmaking is not the fashion industry. The public does not live glued to every new watch that comes out. It must digest the offer. And, this offer must be the clearest possible. The collections must be cleaned up and we must be able to say: the Royal Oak is like this; the Millenary is like this. Having said that, we are well balanced in terms of the number of references we have.

ES: You have used an enigmatic expression in saying that Audemars Piguet “should become the watchmaking Apple”. It is difficult to understand exactly what you mean by this…

FHB: Ah, but it is simple. We want to create our own standards, as Apple has done in computing. By drawing inspiration from other industries that innovate and work in other ways than the unchanging methods employed by the watch industry, we are going to innovate and travel new roads, especially in terms of service, roads that are in the DNA of the brand, but that will make the difference. I don’t want to say more for the moment, since that would be premature, but we will have a very remarkable new innovation coming in 2013 - 2014.

ES: Is it an advantage that Audemars Piguet is a family-owned brand in the current situation where there are strong pressures being exerted in the marketplace?

FHB: Yes, most certainly. It is an enormous advantage. Not only do we not have to worry about the pressures of the stock market, but also the fact that we are a more modest ship gives us greater manoeuvrability [Editor’s note: even so, this year the brand’s turnover was CHF 600 million with 1200 people aboard]. Our ship is not as difficult to handle as an enormous cruise liner. That is one reason. Another is the extraordinary card that we are holding, a trump card to play with the major retailers. Everyone feels and suffers the pressure exerted by the large groups. These retailers tend today, therefore, to favour the independence of the brands they deal with. And how many brands, regardless of size, are able to generate a turnover of more than CHF 2 million per retailer? You can count them on the fingers of one or perhaps two hands. Audemars Piguet is one of them. I will let you do the maths… 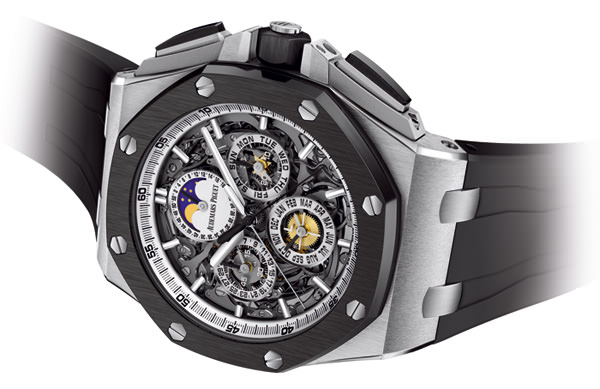 Royal Oak Offshore Grande Complication
Audemars Piguet A contemporary 44-mm diameter titanium and ceramic watch teamed with a rubber strap, is an automatic minute repeater, split-second chronograph and perpetual calendar. Within this impressive horological accomplishment, the 648 parts sharing the 8-cm3 space allotted to the movement are finished with exemplary care. Contemporary finishes, such as sandblasting, are designed to highlight more traditional treatments such as bevelling or hand-drawn flanks. The parts are partially visible through the transparent sapphire dial and by a fitted exhibition back. The latter in particular provides a view of the solid gold oscillating weight featuring a black coating serving to accentuate the overall contemporary touch that the watchmakers have chosen to give this three-piece limited edition.

ES: What is the average price of a watch?

FHB: Around CHF 30,000. For a retailer, this means he sells 70 watches a year to reach the sales figure I just mentioned.

ES: Another sensitive question is that concerning the integration of production, especially these days given the pressure on movements and assortments. Where is Audemars Piguet in regards to this?

FHB: Over time, we want to integrate the few metiers that we still don’t master. This year, we are putting into place a production unit that will be devoted to all of our Royal Oak dials, which are the strong identifying features of the product. Moreover, we have just announced a major investment of more than CHF 30 million on the construction of a new building in Geneva, for Centror, our unit that makes cases and bracelets. As for the famous assortments, we are working on it (smiles). Patience.

ES: On a more personal level, what motivates you the most in your new position?

FHB: Without any hesitation, I can say it is the notion of teamwork. It is being able to succeed in infusing a new attitude into this large team, to push it forward, to bring out the best in the incredible talents that work here, and to encourage and reward initiative. To sum it up, what motivates me above all is to transmit a new way of thinking. Moreover, I am, and will be, very present at the industrial core of our activity, in the workshops, in the production. I would like to infuse this change of mentality everywhere in the brand so that we are all “proactive” without being afraid. This is perhaps an approach inspired by my American experience. But, I also owe this approach to my German wife, who showed me that there is another way to work, without rigidity but with courage, in a shared and common manner.

See our other SIHH 2013 previews from this issue: