Chopard launches a major automobile offensive, taking its inspiration directly from the world of the motor car for two of its flagship launches: a new collection called Superfast and an “aesthetic hybrid”, the L.U.C Engine One H.

Let’s start with the one that really stretches the aesthetic and technical links between the worlds of automobile and watch. Everything, from the surface treatments, the shape of the bridges, the placing of the indication to the detail of the overstitching on the strap, is intended to evoke the automobile metaphor. What immediately catches the eye in this new longitudinal watch, which has a crown at 12 o’clock that is supposed to recall a petrol tank filler cap, are the two bridges on the dial side that are engraved with prominent grooves that remind us of a cylinder head on an engine block. The oversized power reserve, located at 9 o’clock, reads like a gauge, while a “propulsion” tourbillon with a very technical look beats at 3 o’clock, atop which is a red small seconds hand running under a sapphire disc. No less than 14 visible screw heads give the highly structured dial a “rough and ready” appearance that highlights the instrument’s technical sporty nature. The complex shapes of the case, with its curved recesses and concave surfaces, seem to have been cut to give it an aerodynamic look. 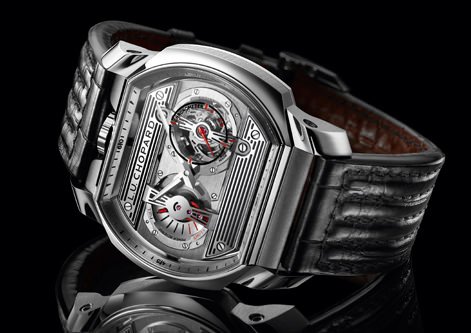 L.U.C. ENGINE ONE H by Chopard

The “engine” is a L.U.C 04.02-L 4Hz manually-wound mechanical manufacture movement, fitted on to silent blocks and enclosed in a titanium case. The COSC-certified chronometer movement has a power reserve of 60 hours and the piece is a limited edition of 100.

Off to a flying startThe other automobile-inspired new product is a new series of Superfast in the Classic Racing collection, which has for a number of years been “destined to pay tribute to the automobile world.”

For the first time in this collection, the new Superfast models are fitted with Chopard movements that have been designed and manufactured in the workshops of the Chopard-owned Fleurier Ebauches. They produced 5,000 movements in 2012 (the objective is to reach 15,000 movements by the year 2015). The first of these is the self-winding Chopard calibre 01-01-M, which is a COSC-certified chronometer with a 60-hour power reserve and beats at 28,800 vibrations per hour. It is used in the Superfast Automatic, a 41mm three-hand model with date window at 6 o’clock.

Another version of the same calibre, the Chopard 01.02-M, drives the Superfast Power Control, which, as its name indicates, has a power reserve indicator. Last but not least, the Chopard 03.05-M is a self-winding chronograph movement with hours, minutes, small seconds at 6 o’clock, date window at 4.30, chronograph with central seconds hand, minute counter at 3 o’clock and hour counter at 9 o’clock.

All three models have a very special finish, with their large bridges openworked with fine “air scoops” inspired directly by cars. The same decoration is also found on the black dial, which bears vertical anthracite lines intended to remind connoisseurs of “the cooling wings of racing cars”, and on the sides of the lugs and the crown, which resembles a miniature steering wheel. The flange displays the minute markings like a vintage rev counter, while the power reserve looks like a petrol gauge and the rubber strap takes the profile of a “slick” Formula 1 tyre. In short, there is plenty to make even the most demanding aficionados of automobile aesthetics happy.

Strategic choicesBut the importance of this new collection is also strategic. By presenting a complete sporty collection using only manufacture movements, Chopard has taken a major step forward towards autonomy—in terms of movements—moving gradually, with consistency and determination, from the status of a “luxury bodyshop”, staying with the automobile metaphor, to that of a fully-fledged engine builder. This evolution has become indispensable in the new watchmaking landscape, following ETA’s announcement to reduce deliveries. More than ever, the movement is back under the spotlight. Which is no bad thing.