Dieter Meier, founder of the legendary electronic music group Yello, a precursor of the techno movement, conceptual artist (he once offered a dollar to any pedestrian on the streets of New York who said “yes” or “no” to him), film director, former professional poker player, is also an experienced businessman. He owns a huge estate in Argentina and sells the organic meat and wine he produces there with success in Switzerland. What is less well known is that he is also an investor and, as such, has been a partner in Ulysse Nardin since 1983 and friends with Rolf Schnyder, who relaunched the brand, for many years.

Being the sound and elegant crooner that he is, he has designed a watch called Stranger for Ulysse Nardin, as a tribute to the famous and catchy melody “Strangers in the night”. And the melody could indeed become catchy, because this musical watch, which by the way makes all the others suddenly look old, plays on demand the tune immortalised by Frank Sinatra in 1966 (you just have to press on a pusher), every hour (another start/stop pusher at 10 o’clock) or not at all (if you cannot get “Strangers in the night” out of your head and you need a rest). 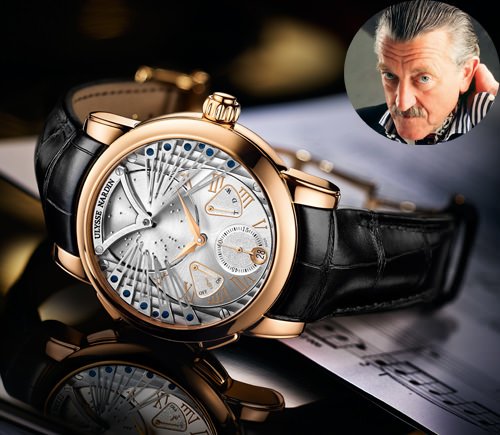 The distinctive architecture of the Stranger and the surprising aspect of its dial are a direct result of the musical function that reinvents the old music box. Instead of roller, a disc with pins causes ten suspended blades to vibrate as it turns. These sharp-edged blades are spread across the upper portion of the dial, attached to the inner flange by blued screws. The 45mm case is in 18-carat rose gold.

But beyond the frivolities of this instrument for a dandy and the fine watchmaking finishing, the Stranger also reveals some high-tech treasures, such as the silicon escapement, pallets and balance spring in the self-winding Calibre UN-690 manufacture movement, which has a 48-hour power reserve. Or the ergonomic innovation that is the integrated pusher in the crown, which activates the time setting mechanism with a simple push.

So it’s easy to adjust your watch, sitting at the bar’s piano, and recall that we have all, at some time or other, been “Strangers in the night”.