The sports watch can take on numerous guises, from the ultra-technical instrument watch for pilots to highly-resistant divers’ pieces, not forgetting the humble but equally sports chronograph. Here we present a mixture of the latest arrivals in this segment, mixing the traditional and not-so-traditional with the highly innovative.

For the armchair pilotsBell & Ross once again assert their dominance in aviation-inspired watches with three new models in the BR01 Aviation collection that continue last year’s theme of reproducing, as faithfully as possible, the individual instruments found in aeroplane cockpits. The models are fitted in the familiar 46mm square black PVD cases, which are reproductions of the surrounds that cockpit instruments are screwed into. The BR01-92 Airspeed and BR01-97 Climb models offer a traditional three-hand configuration, the latter using the cockpit variometer (vertical speed indicator) as an inspiration for its power reserve indicator, while the BR01-94 Flight Compass presents a much more technical display.

Underneath an aeroplane silhouette engraved on the sapphire crystal, three concentric discs revolve to display the time in a configuration that is a reverse of the norm. The hours are indicated by the outer disc, which is inscribed only with the four points of the compass (E, S and W for East, South and West, with the double arrow-head at North indicating the hour), the minutes are read off the middle disc and the seconds off a simple stick hand on the small central disc. All three models are water resistant to 100 metres, come with separate rubber and heavy-duty fabric straps and are limited editions of 999 pieces, the first 99 of which are reserved for a special collectors’ box that contains all six BR01 instrument models.

Chronograph 2.0 At BaselWorld this year, Concord will be presenting a redesigned version of its six year-old C1 chronograph model. Although still clearly recognisable, the design of this latest iteration of what was originally a boldly different chronograph has now been toned down a little. The overall look is much less angular, with a more rounded form to the model’s signature eight blocks clamping the bezel to the case (whose screws have also disappeared), rounded chronograph pushers and a smaller crown. The most noticeable difference, however, is the dial, which has been transformed from highly technical to a model of readability, with elegant rounded octagons for the subdials and a brickwork-effect background that both evoke classic watch models. Under the skin, however, the model remains unchanged and is still powered by the trusty ETA Valgranges A07.211 calibre. 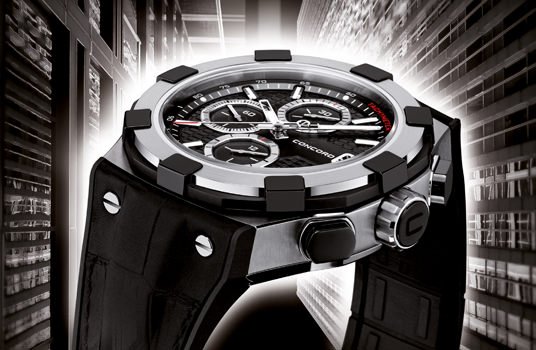 At first glance, the new Snyper Ironclad model looks like a normal, robust chronograph with a complex design and multi-level dial. But this 53mm x 48mm stainless-steel timepiece can accommodate some rather unusual extra modules on the special bar found in the 9 o’clock position on the case. The three modules currently available are a red laser/white LED combination, a container and a special container with pill dispenser. We can only speculate what these strange accoutrements are intended to be used for. The timepiece is powered by the Snyper F101 chronograph calibre by Concepto, which runs at 28,800 vibrations per hour and offers a 48-hour power reserve and includes a day-date indication.

Newcomer Bomberg, based in Neuchâtel, seems happy to swim against the current watchmaking tide in more ways than one. The brand will be presenting its products in the shadow of Hall 6 and is the brainchild of a distributor who is familiar above all with the Latin American market. Three collections are being presented at the launch for a total of some 50 individual references fitted with Miyota quartz three-hand and chronograph movements. Visitors to the company’s website are confronted by a well-inked torso showing off the watches in a break with the more familiar advertising codes. And the new timepieces themselves dare to be different, with the “1968” line sporting an asymmetric case with the crown and pushers on top, in the style of a traditional stopwatch. It is joined by the rugged Maven and “neo-classic” Semper collections, all of which are available in a satisfying range of dial configurations to match their cases in brushed stainless-steel and brushed black or red-gold PVD.

With a strong product range and bold marketing, Bomberg already stands out. Its success now lies in the ability of its founders to use their distribution knowledge to maximum effect to establish the brand. Unsurprisingly, their initial focus is on Colombia, Mexico, Panama and Venezuela, with expansion to the rest of Latin America to follow, together with a gradual roll-out across Asia, Europe and the Middle East over the course of 2013.

Military offensivesThe latest versions of the “Original” model by Victorinox recall both the early military watches, which often had protective leather covers or grilles, and the original cases of the brand’s world-famous pocket knives, which were also in leather. The two quartz-powered models (Ronda for the three-hand and ETA for the chronograph) come with distinctive leather cuffs that can be added to the natural leather strap, while the chronograph (a limited edition of 1989 pieces in commemoration of the year that the original “Original” was launched) has an additional removable hood that can be used to cover the entire watch head. The 40mm case is forged in a shockproof and lightweight nylon in a typically military dark-grey colour and to complete the military associations the oversized Arabic numerals are printed in a stencilled font similar to that found on ammunition boxes.

Earlier this year, Mondaine won a court case against Switzerland’s retail giant Migros (for the record, Migros’s 2012 sales topped CHF 25 billion—three times those of the Swatch Group) regarding the licence and distribution for its M-Watch collection. This was sold by Migros until 2010, when the partners ceased their cooperation because of differences of opinion. Since then, Migros had claimed the rights to the M-Watch name and petitioned for Mondaine to be forbidden from selling watches under this name, but had also been selling its own copies of the M-Watch. In February this year the rights to the name were awarded to Mondaine.

Meanwhile, Mondaine’s sister brand Luminox was finalising a new model that allows its wearer to navigate in anything from a dense forest to the urban jungle. The Recon Navigation Specialist model in the 8830 collection comes with a detachable liquid-filled compass attached to its sturdy rubber strap and a tachymetric scale that has been calibrated to calculate walking speed based on a distance of 50 metres. Thanks to a handy ruler marked on the strap, hikers, walkers and explorers have all the tools they need for precise, map-based navigation, plus an additional GMT hand for a second time zone. The black dial on the large 46mm timepiece offers excellent legibility (with the average walking speed of 3-4 kilometres per hour clearly marked in green between 9 o’clock and 12 o’clock) day and night thanks to LLT (Luminox Light Technology).

New American brand Minuteman has been inspired by an interesting and worthwhile concept. Its products are unmistakably settled in the modern “hunter” category, which has nothing to do with pocket watches and everything to do with removing any shiny surfaces that might reflect light and scare away a hunter’s quarry (or a military sniper’s target). Thomas Carey, president of the CGA Company, who has experience in the online retailing of watches, explains the concept: “We are very concerned that as a nation we are turning our back on those who have served us the most. As the current conflicts wind down, less and less attention will be paid to those who have sacrificed for us all. We are also bothered by the multitude of groups that claim to help veterans but are really spending the bulk of the funds they raise on more fund-raising and high staff salaries.” Carey therefore pledges to allocate a share of the profits from each Minuteman sold to carefully selected charities that provide genuine assistance to veterans.

The watches are made in the USA using Swiss quartz movements and come in matt black PVD or brushed steel with black dials, Arabic numerals and a canvas strap. At the time of writing, the watches, which are scheduled for a limited production of around 100 pieces per reference, were available on pre-order for prices under 500 US dollars. To reinforce the charity theme, visitors to the CGA Company website (http://www.cgacompany.com) could also pledge various amounts to enter a draw to win a Minuteman timepiece.

Boyle’s law applied to divers’ watchesChemist and physicist Robert Boyle was the first to publish a law stating that, for a fixed amount of gas at a fixed temperature, pressure and volume are inversely proportional. In other words, while one doubles, the other halves. Oris has used this law to brilliant effect in producing a new depth gauge that is ingenious in simplicity.

In the Oris Aquis Depth Gauge model, the brand uses a sapphire crystal that is some 50 per cent thicker than usual and which has a channel machined into its outer edge that runs counter-clockwise from 12 o’clock around the dial to between 1 and 2 o’clock. The crystal is joined to the case with the usual rubber gasket to ensure water resistance to 500 metres but the channel in the sapphire crystal is actually designed to allow water to penetrate it from an opening at 12 o’clock. As the diver descends, the air in the channel is compressed and, in accordance with Boyle’s law, allows water to enter the channel. It is the boundary between the water and compressed air, marked by a change in colour from light grey to dark grey, which displays the corresponding depth on a scale around the bezel. This innovative depth gauge is housed in a stainless steel case that has a unidirectional bezel with black ceramic insert and interchangeable rubber strap or stainless-steel bracelet. It is powered by the self-winding Oris calibre 733 with date and retails for CHF 3,000.

Among all this variety of models, which clearly shows that there is no lack of inspiration or indeed innovation in the sports watch segment, it came as no small surprise that the best sports watch of 2012 according to the jury of the Geneva Watchmaking Grand Prix was a thoroughly traditional chronograph, the Doppel 2.0, produced by boutique Austrian brand Habring. But with only 20 examples of this model produced, the brand has capitalised on its success by presenting a successor, the Doppel 3, for 2013. It is fitted with Habring’s in-house A08MR-MONO movement, which is a mono-pusher split-seconds chronograph with escapement parts in chronometer quality and a 48-hour power reserve. With Habring’s classic styling, reminiscent of 1960s stopwatches, recognised at the highest level, it’s clear that there is still a revered place for the classic chronograph.

We will bring you our usual comprehensive round-up of all the new sports watches presented in BaselWorld in the next issue of Europa Star.