Is it a precursor of a great return to the most traditional form of stylistic classicism or an isolated piece, swimming against the tide of the current aesthetic trends? Regardless of the answer to this question, you can’t help but notice that the Patek Philippe reference 6002 Sky Moon Tourbillon has made an explosive entrance on the watchmaking scene. Rarely have we seen such a richly engraved piece that has been decorated to such an extent that none of its surfaces has escaped the engraver’s trace or the enameller’s brush. Stylistically the piece is astonishing, because it marks a triumphant return of the art of decoration that was the hallmark of the Geneva school of watchmaking. It is also part of a long tradition without trying to deviate from the aesthetic precepts of the great classic watchmaking that was born in the 16th century, which compensated for its lack of mechanical precision by a profusion of ornament that was supposed to reflect the richness and prestige of the owners of what were at the time only approximate timekeepers. 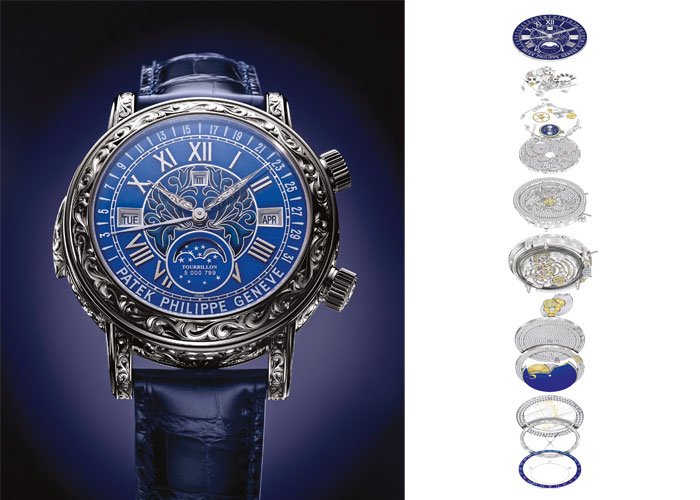 The Patek Philippe reference 6002 Sky Moon Tourbillon is as complicated outside as it is inside.

Since then, a lot of water has passed under the bridge and, with the invention of the sprung balance, the precision of mechanical watchmaking improved considerably and watches gradually became genuine instruments that accompanied and assisted the development of navigation and later science. Ever since, their decoration lost importance, neglected in favour of highlighting the scientific qualities of a watch. You only have to look at the revolutionary watches of Breguet that are devoid of any decoration and display their precision against immaculate backgrounds that favour the finesse of the measurement scales.

The Patek Philippe reference 6002 Sky Moon Tourbillon is as complicated outside as it is inside.

It is therefore perfectly understandable that the Patek Philippe reference 6002 Sky Moon Tourbillon has caused a stir. Here is a watch whose decoration is worthy of the great prestige watchmaking of yore, yet which has one of the most complicated and most precise calibres that there is. Patek Philippe’s ambition is very clear: to show that the watch case itself can be a “grand complication” just as much as the movement inside it.

This movement is not in itself new. It merely has a few slight differences compared with the calibre that was fitted in the preceding Sky Moon Tourbillon reference 5002, presented in 2001. The only modifications concern the displays for the date, the month and the leap-year, which are shown in a window rather than by a hand, and the replacement of the small sub-dial for the age of the moon by a moon-phase window that is considered “more poetic”.

But otherwise the 12 complications of what is still the most complicated wristwatch produced by the Geneva maison are once again found in this new, double-sided reference: a minute-repeater with two cathedral gongs, a tourbillon; on the back a perpetual calendar with retrograde date and mean solar time; on the front, the astronomical indications, i.e. a moving map of the firmament, sidereal time, the angular movement of the moon and the moon phases. A few optimisations have also been made: a new metal alloy adds great purity and strength to the gongs; new energy calculations were required for the displays by window, which are easier to read but require more power; and complex theoretical calculations were carried out in order to determine the optimum variant for the transmissions in the gear train that are responsible for the astronomical displays, in order to achieve the greatest possible mechanical precision (-0.05 seconds per lunar day, -0.088 seconds per sidereal day and -6.51 seconds per lunar cycle). 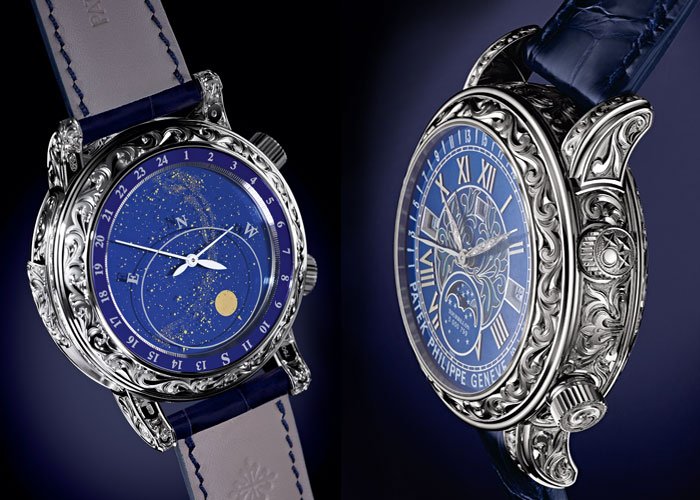 The Patek Philippe reference 6002 Sky Moon Tourbillon is as complicated on one face as it is on the other.

The same level of precision is found in the white-gold case, which is entirely hand-engraved. Not one part of its surface, not even the hands, has escaped the graver. Garlands, swirls, elements drawn from the Calatrava Cross, the brand’s emblem, chiselling and grooves are spread across the entire surface area, including the minute-repeater slide, the crowns and the lugs. Over 100 hours of patient work are required, with the slightest slip-up endangering everything with the risk that the piece has to be sent back to the foundry.

The Patek Philippe reference 6002 Sky Moon Tourbillon is as complicated on one face as it is on the other.

The work of the enameller, the grinder and the insert-applier is added to this exceptional engraving work. Two complementary enamelling techniques are used on the gold dial: champlevé, which, applied by brush, fills in the cavities that have previously been ground out and cloisonné enamel, which reproduces the outline for the flower decoration with fine gold thread, before the cavities thus formed are filled with enamel of differing shades of blue. The Roman numeral inserts and the other indications painted in light grey are then added on top of this décor once it has been fired in the oven (at around 850°C). Another subtle detail is the different shades of white and black enamels that make up the surface of the moon.

Will this Sky Moon Tourbillon, which will only be produced in “small quantities” as Thierry Stern himself says, remain an atypical watch or does it sound the fanfare of a return to the great art of decoration? Time will tell.