A watch does not usually tell a story. At least none beyond that of its own way of measuring and beating out the passing of time. A watch can, of course, refer to a story – a sporting achievement, a notable event, for example – but this remains external to the watch itself. The watch merely “commemorates” this story, recalling it with a sign, an engraving or a miniature painting. 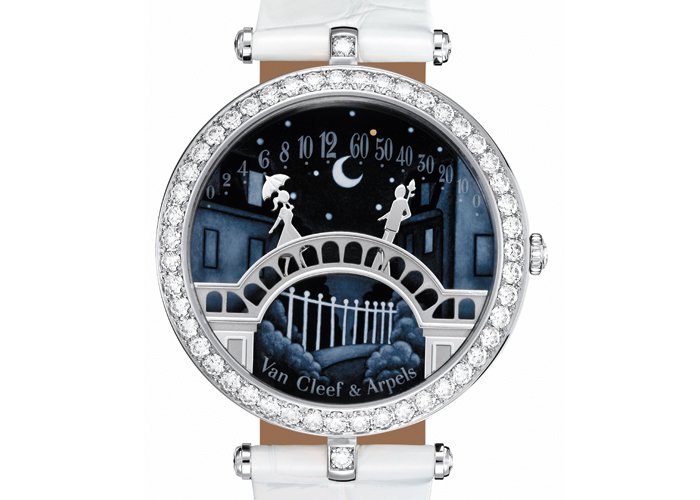 With its Poetic Complications (a registered trademark), Van Cleef & Arpels goes much further. The story that the watch tells is no longer external to it but is instead the visible expression of its own internal life and the movement that powers it. The watch thus becomes the location for its own story. The dial is like a theatre stage where the play is acted out. Behind the scenes, a complex machinery orders and carries out the scenic “effects”. The narration thus takes shape thanks to the watch movement itself.

THE POETRY OF PASSING TIME

The Poetic Complications of Van Cleef & Arpels are therefore a unique example of an horological narrative. In order to achieve this, different kinds of complex movements have been designed and implemented, each telling a different story, a story that takes the observer through days, seasons, constellations, feelings and notable moments in their lives.

The story that the watch tells is no longer external to it but is instead the visible expression of its own internal life and the movement that powers it.

Consider, for example, the Quantième de Saison movement, which turns very slowly – at the rate of barely one degree per day – an enamel disc behind the dial to tell the rhythmic and poetic story of the seasons, which change from day to day almost imperceptibly. With this watch, none of the 365 days of the year has the same face as another.

The 24-hour movement, on the other hand, brings to life the stories that happen during a day: the alternation between sun and moon, or a romantic walk around Paris with the A Day in Paris watch, which makes the emblematic monuments of the City of Light slowly move.

The retrograde movement offers other interpretations of time and other poetic stories. Thanks to the distinctive movement of the hands, which describe an arc before returning to their starting position, little fairies, butterflies or lovers interact with their surroundings, come together and separate before starting their joint journey again. The retrograde watches Féerie, Butterfly Symphony and Pont des Amoureux have in turn left their marks and helped to define this special poetic territory and narrative.

“The beating heart of the brand is creation. And this creation can only come to life through the craftsmen, who we call the ‘golden hands’.” Denis Giguet

“The success of these watches, which represent around 50 per cent of Van Cleef & Arpels sales,” Jean Bienaymé, marketing and communication director, Léa Dassonville, watch marketing director and Denis Giguet, watchmaking workshop director for the brand, explain together, “undoubtedly comes from the fact that the stories that they tell are universal and that each of these watches offers various levels of reading: there is a strong emotional aspect, a quite exceptional artistic refinement of the dials and a very advanced level of horological technicality. We are certainly the only ones who offer complicated high-end watch movements whose technology is not just for its own ends but is geared towards a poetic and romantic depiction of time. In a way, it makes you think of classic dance: the show is all about lightness and flight, but behind this there is simply technique, hours of training and sweat!”

The Poetic Complications are one of the major pillars of this brand that also offers two other major watch families: the Exclusives, which include the high jewellery watches and the Extraordinary Dials, emblematic of the artistic crafts of which Van Cleef & Arpels is an ardent defender, and the Iconic Creations, which includes the timepieces that have marked the rich history of the brand, like the Charms, Alhambra, Cadenas and the elegant masculine Pierre Arpels watch, which dates from 1949 and has recently been given a facelift by the designer Eric Giroud.

The inauguration of the new Campus Genevois de Haute Horlogerie, scheduled for spring 2015, where the creative watchmaking workshops of Van Cleef & Arpels will have a building all to themselves, should give new impetus to the brand’s ambitions. They will bring together under the same roof the teams of multidisciplinary artisans in order to bring development, production, logistics, quality and customer service closer together. The aim is to stimulate creativity and innovation and share the exclusive know-how of this brand that dates back to 1906. We look forward to hearing new untold stories.