HIGHLIGHTS - HERMES elevated to the ranks of haute horlogerie


HIGHLIGHTS - HERMES elevated to the ranks of haute horlogerie

The Hermès boutique on Faubourg Saint-Honoré in the centre of Paris was chosen for the launch of the timepiece that signals the brand’s entrance into the world of high-end watchmaking. The unusual name of the piece, the Arceau Lift, is an indication why the store was chosen over, say, BaselWorld, for such a significant launch. It is because this new watch has been designed from scratch based on an idea that came to the brand’s product manager, Philippe Delhotal, after a visit to the store.

The Arceau Lift marks the start of a new direction of exploration at Hermès.

In the 3,000 square metres that make up this bastion of luxury, Mr Delhotal spotted an intertwined double H motif on the principal lift in the store, which symbolises the union of the Hermès and Hollande families when the grandson of the company’s founder, Emile Hermès, married Julie Hollande. Philippe Delhotal chose this symbol as the basis for the design of a new flying tourbillon using the Arceau case with a new movement that has been designed and produced exclusively for Hermès by La Joux-Perret.

The Arceau Lift marks the start of a new direction of exploration at Hermès, looking to produce haute horlogerie models with sober designs that will complement the intricate craftsmanship in the decorations found on models such as those that feature straw marquetry. “It will be another dimension using what I like to call ‘traditional complications’,” explains Mr Perramond. “By this I mean those that are familiar and that offer a good technical performance. Here we need to develop a wider offering without, of course, forgetting our unique pieces such as the Temps Suspendu.” 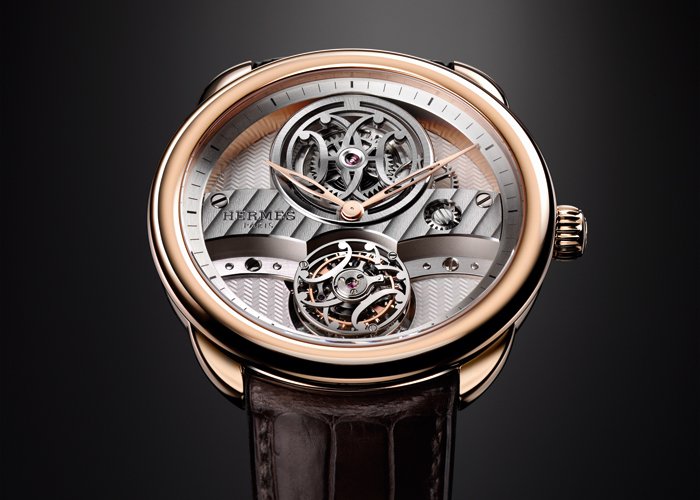 ARCEAU LIFT BY HERMES
The architecture of the 43mm diameter Arceau case in rose gold, with its asymmetrical lugs, only serves to accentuate the apparent weightlessness of the flying tourbillon. The airy space beneath the sapphire crystal is dominated by the flying tourbillon at 6 o’clock and the barrel housing at 12 o’clock, both of which share the double-H decoration from the famous lift in the Hermès store in Paris. The other components of the manually-wound H1923 calibre developed exclusively for Hermès by La Joux-Perret are hidden behind a bridge running across the case from 3 o’clock to 9 o’clock. The movement beats at a frequency of 3Hz and offers 90 hours of power reserve when fully wound. All surfaces are chamfered and polished by hand and have polished screws, while the underside of the tourbillon is visible through a sapphire crystal aperture at 6 o’clock on the reverse side of the case, which is surrounded by an engraved Hermès ex libris motif. The Arceau Lift is finished off by a matt Havana alligator leather strap produced in-house in the workshops of La Montre Hermès as a reminder of the brand’s strong tradition in the manufacture of leather goods.

What is apparent at first glance is the striking architecture of this flying tourbillon, which is divided into two horizontally across the centre of the dial by a slender bridge that conceals the gear train, allowing the upper and lower halves of the dial to be dominated by the barrel housing and flying tourbillon carriage respectively. A second glance, however, shows that the six months that were spent perfecting the design were worth it: the discreet engine-turned chevron pattern on the background, the bevelled surfaces (40 hours are required just for bevelling) and contrasting brushed and polished surfaces all show the attention to detail that has gone into a movement that has been designed around the watch, rather than the other way around.

Luc Perramond admits that the Arceau Lift is to a certain extent an answer to demand from «loyal customers of the brand who are discovering watchmaking». It is unsurprising that the model will be available exclusively through the brand’s own stores. But with only 176 examples (the figure corresponds to the age of the brand) of this limited-edition piece to be shared among 340 such outlets, there are clearly not enough to go around. The price of 155,000 Swiss francs may temper demand somewhat, although the day before the launch a customer purchased a pocket watch from the brand’s “Timepieces of Exception” exhibition at the Paris store for the equivalent of 250,000 Swiss francs.

We can also expect yet more innovation along these lines from Hermès at BaselWorld 2014, as Luc Perramond revealed: "It’s a saga I want to continue. It is rich in possibilities and it is a challenge in terms of ideas and technicality. We will be presenting a singular complication at BaselWorld that is in the same spirit as the Temps Suspendu but that will allow a new form of interaction with the wearer.“The astonishing sight of customers queuing up in the Hermès store not to pay but just to be served is proof enough of Luc Perramond’s claim that «business is good», which is confirmed by a 10 per cent year-on-year increase in sales for 2013. And, unlike some of its competitors, Hermès customers are not just Chinese.”We are historically strong in Japan and Europe,“says Mr Perramond,”we are developing in China but also in North America". The lack of dependence on the mainland Chinese customer and the associated uncertainties with their economy, but perhaps more importantly the exciting prospects in the horological pipeline, bode well for Hermès.

A WORLD OF NEW POSSIBILITIES 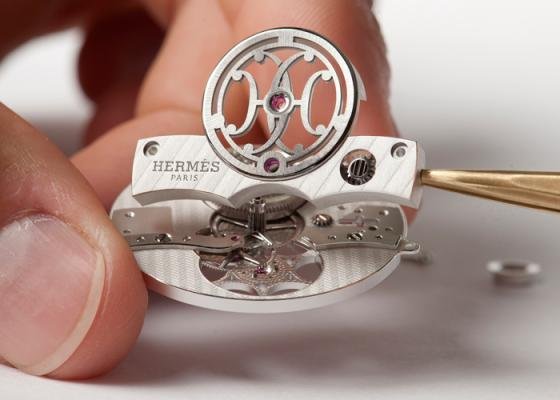 The 18 months of development required for the calibre H1923, as the new movement is known (1923 is the year that the lift was installed in the store), as well as the significant investments for its industrialisation, will not be paid off by the 176 pieces of the limited edition Arceau Lift alone. This timepiece is merely the first-born in what promises to be a populous family of tourbillons.