To celebrate the tenth anniversary of the V4, the only watch in the world that is belt-driven, TAG Heuer is making waves by presenting the V4 Tourbillon. It is an alliance between the queen of watchmaking complications and the technological avant-garde. Driving a tourbillon with belts? The idea sounds crazy and the boffins at TAG Heuer were certainly perplexed. But with the Mikrotourbillon in 2012, then the Double tourbillon Mikropendulum the next year, they had already cleared a swathe through the path of technical tourbillons.

A TOOTHED CAGE A conventional tourbillon is driven by a wheel above the cage. Here, the novelty is that the tourbillon is driven directly by the cage. The cage itself is connected to the seconds wheel by a belt. On the back of the watch nothing distinguishes the V4 Tourbillon from a “normal” V4: there are the same four barrels linked together in pairs by a belt and separated by a central linear mass. But it is on the other side of the watch that everything changes. 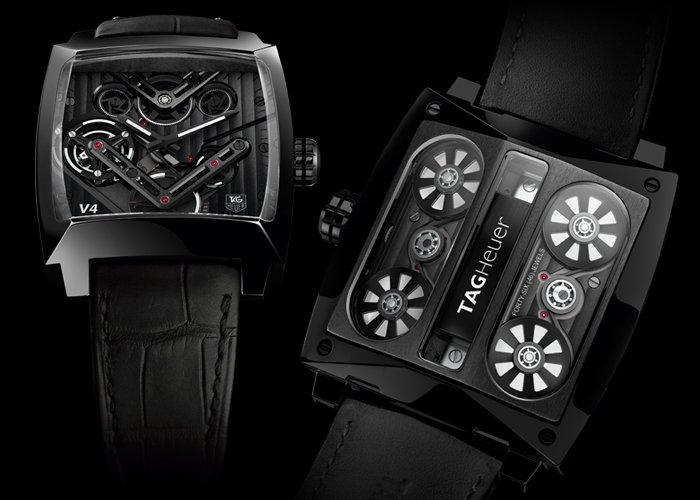 THE BENEFITS (TO BE CONFIRMED) At the time of writing the benefits “still need to be confirmed in laboratory testing”, but in theory they are significant. The first is shock resistance. When two metal wheels are in direct contact cannot absorb the energy from a shock, which is therefore transmitted throughout the movement. A belt, on the other hand, because of its flexibility can absorb a large proportion of this energy. So the V4 can be considered “the most robust high-end watch”. In the case of the V4 Tourbillon, any shocks would not be transmitted to the tourbillon, since it is driven by a belt (the watch is also guaranteed for four years).

The second benefit: a probable increase in accuracy. In a “normal” tourbillon, the sprung balance oscillates alternately from left to right and from right to left, whereas the cage itself rotates in only one direction. This creates an effect known as “knocking”, since the oscillations of the sprung balance create micro-disturbances in the cage’s rotation. With the belt-drive system acting directly on the toothed cage, all knocking is eliminated, errors are ironed out and precision is improved as a result. The V4 Tourbillon, which you can see at BaselWorld, is not only a talking-piece but is also part of TAG Heuer’s commercial strategy in high-end technological watchmaking. The first 50 pieces of this model in titanium, which are currently in production (and will retail for around 150,000 Swiss francs), will be delivered between June and August 2014.

Read more in our interview with Stéphane Linder, the new CEO of TAG Heuer HERE.