For its 33rd edition the Hong Kong Watch & Clock Fair welcomed 765 exhibitors from 19 countries. Among the hottest new trends were silicone and the first smartwatches.

“It’s too expensive to exhibit at Baselworld,” is a frequent lament of exhibitors at the Hong Kong Watch & Clock Fair, when they see my “Europa Star - Switzerland” badge. It must be said, the former British colony is a more suitable location for the production, assembly and distribution of fashion watches at an affordable price. We should note in passing that Hong Kong remains in value terms the second largest exporter of finished watches in the world, second only to Switzerland! “The demand for simple, robust and inexpensive watches will be strong in emerging markets and developing countries,” declares Takashi Yamamoto of the Japanese watchmaking federation. 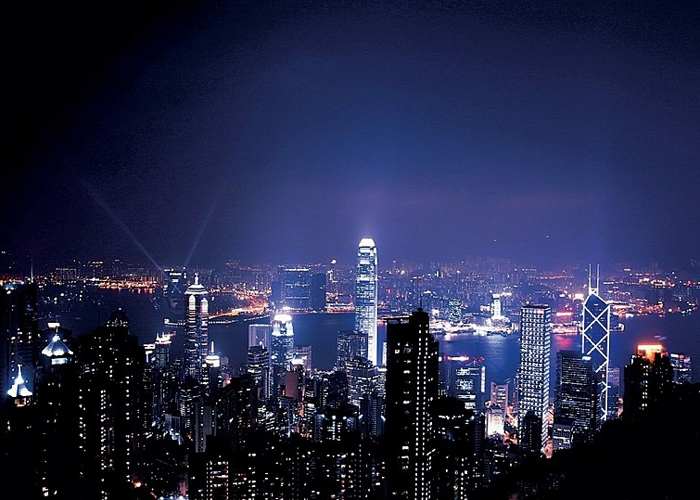 “The demand for simple, robust and inexpensive watches will be strong in emerging markets and developing countries.” Takashi Yamamoto

Although ‘inexpensive’ implies cheap components, there is increasingly less need to compromise on quality. Silicone rubber is a good example. This reinforced silicate-based elastomer has remarkable properties: it has high tear strength, it is water-resistant, it will tolerate extreme temperatures, it’s anti-allergenic, light and flexible, and it has a smooth, silky texture that does not stick to the skin or cut into the wrist. This synthetic rubber is not only very comfortable to wear, it can take a variety of treatments (printing, engraving, coating) to give it different properties such as changing colour on exposure to UV, or even phosphorescing in the dark! Brands and suppliers at the 33rd Hong Kong Fair surfed the wave of silicone, and the “Silicon” brand even made it its primary theme, decorating its watch dials with tiny tubes of coloured silicone. You won’t see those anywhere else! 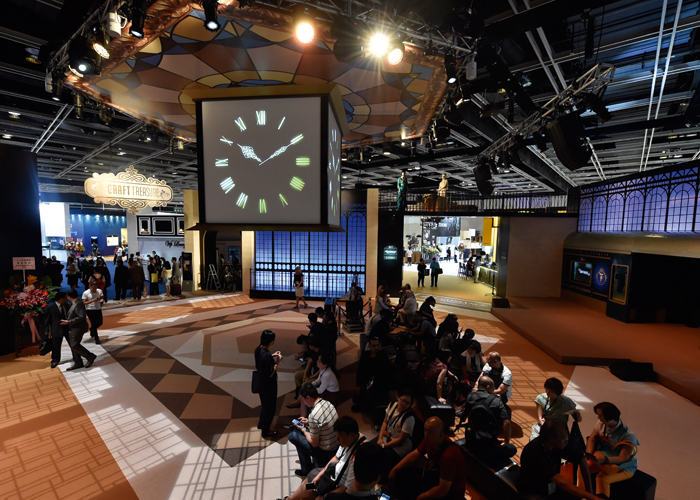 Another emerging trend was the smartwatch. Most models on show - such as the Ezio or Cogito - had limited functionality, although some, like the Add Me+ with touch screen, a slim 9mm prototype, were more advanced. Many Hong Kong brands are preparing to plunge into this new sector of the market, but the positioning of smartwatches remains uncertain (see ‘Smartwatches: watchmaking federation presidents air their views’).

Some 19,000 buyers strolled the aisles of the iconic Hong Kong Convention Centre over the five days of the fair, 2% more than last year. There was a marked rise in the number of Indian (+37%), Korean (+30%) and Thai (+28%) buyers. The fair is aimed primarily at professionals, as was obvious from the “Small Order Zone”, where the minimum order ranged from 5 to 1000 units, with average orders from the 7000 purchases made comprising around 300 units.

Some 19,000 buyers strolled the aisles of the iconic Hong Kong Convention Centre.

There was little risk of getting lost, as the categories were better differentiated than in previous years. The first hall was for entry-level brands, the second was devoted to suppliers and producers of components and machine tools, and the third hall housed the premium brands. The Salon de TE was decorated to resemble an 18th century European railway station, with the “Grand Central” in the middle, a relaxed space where 30 presentations were given during the fair. The Hong Kong Clock & Watch Fair also featured countless seminars, conferences, networking events, receptions and even a design competition (see ’Talent Spotting’ box).

There were so many innovative ideas on show it would be impossible to cover them all. So here are our top picks! The Hong Kong group Acestar (Van Gogh and Tonino Lamborghini) has bought the Mini licence to launch a ‘Swiss made’ range of watches celebrating the iconic British car. Longitude, another Hong Kong group, has four brands or licences (Everlast, FILA, Solus and New Balance), all with a sports focus. Last year, Solus unveiled a watch vending machine in the Hong Kong underground with very good results, and will be expanding this sales concept. Reina V is a Belgian brand that makes oversized watches solely for women. To limit excess weight, the curved steel back is topped with an aluminium case, onto which a steel crown is screwed. After the phenomenal success of Ice-Watch, perhaps Belgium is about to become a watchmaking superpower? “No, Ice-Watch is not perceived as a Belgian brand, but Belgium is recognised for its designers,” explains director Avi Saraga.

The group Solar Time owns a plethora of interesting brands, including Russian label CCCP, the submarine-themed Ballast, and AVI-8 with its war plane aesthetic. They have now added Earnshaw: “They are assembled in England, as we always try to give our products legitimacy,” notes director Vishal Tolani. Thomas Earnshaw, in case you had forgotten, is considered the ‘father of the modern marine chronometer.’ Here too, the design of the watches is perfectly in keeping with the theme. In 2013 The Chinese Timekeeper promised a ladies’ collection. They have delivered, with a diameter reduced to 38 mm. The brand’s founder, Adrien Choux of France, is preparing to open a shop in the tourist city of Xiamen. Memorigin, a Hong Kong brand that produces its own tourbillons and cultivates a typically Asian style, is launching a model equipped with an MO 1231 movement; it has a tourbillon at 12 o’clock, power reserve indicator (70 hours) at 9 o’clock, day/night display at 3 o’clock and finally the current time at 6 o’clock. The ‘Time Machine’, inspired by famous musician Mark Lui, sports a vaguely ‘steampunk’ style that Jules Verne would have appreciated.

In 2013 The Chinese Timekeeper promised a ladies’ collection. They have delivered, with a diameter reduced to 38 mm.

Obaku of Denmark takes great care with the collections it exhibits in Hong Kong, as this is its primary market. This year the brand unveiled a remarkably elegant model in brown and gold, with a smooth case and link bracelet. Although you wouldn’t guess it from the name, Danish Design is a Dutch brand. It launched a men’s watch named the 1050 ‘Date 360’ to reflect the fact that - as the name this time implies - the date is indicated by a white dot that rotates around the dial. Let us finish on a more technical note with Ronda, the Swiss maker of quartz movements, and its Xtratech Z69, a 131/4 chronograph calibre with all the essential functions: 30-minute chrono, central seconds, date and day indicators, small seconds and a ‘three-eyed’ design for a boldly modern look.

For the 31st time, the Hong Kong Watch & Clock Fair held a design competition. An expert jury presented awards in two categories: independents (Open Group), which were generally sponsored by companies, and students (Student Group) representing universities and colleges. The criteria were originality, creativity, aesthetics and commercial potential. Here are the results.

STUDENT GROUP 1st: Wan Nok Yiu, ‘Essence’ watch, School of Continuing and Professional Studies, The Chinese University of Hong Kong. In complete opposition to the smartwatch with its avalanche of information, Ms Wan’s ‘Essence’ pendant watch captures the idea of simplicity and humility in one’s approach to life.

3rd: Ahmat Winkie, ‘S-Watch’, School of Continuing and Professional Studies (The Chinese University of Hong Kong). ‘S’ is for Survival, and this smartwatch is dedicated to hikers; you enter the departure point and destination, and the watch indicates the best route to follow. In an emergency it can also function as a mobile phone. 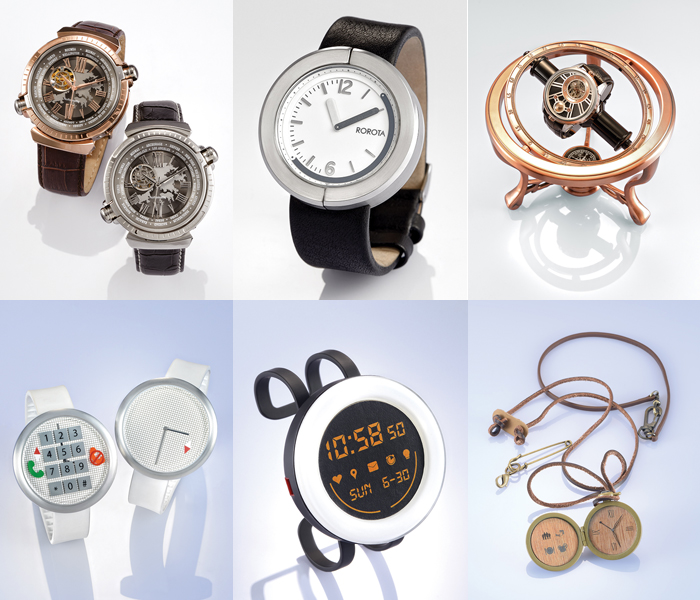 OPEN GROUP 1st: Leung Ho Him, ‘The Catcher’ watch, sponsored by MZB World Time Ltd. It was homesickness that inspired Mr Leung to design this dual-time GMT watch. The globe at the bottom of the dial is split into 24 time zones and, by simply adjusting the local time, the reflective ring enables the wearer to read off both local and home time. Through this temporal connection, ‘The Catcher’ brings the wearer closer to family and friends.

2nd: Li Ka Sing, ‘Rorota’ watch, sponsored by FDT Ltd. The design of the ‘Rotora’ was inspired by the idea of sharing. Mr Li has integrated a roller that keeps the ‘6’ at the bottom, regardless of wrist position. This makes it very easy to ‘share’ the time with someone else.

3rd: Tang Siu Hung, ‘Explorer’ watch, sponsored by Beijing Time 100 E-commerce Co. Ltd. Mr Tang’s Explorer is intended for businessmen, the mappa mundi on the dial and the two time zones inviting them to conquer the world. Apart from the shape of the continents, which we found puzzling, the design of the watch is extremely appealing. 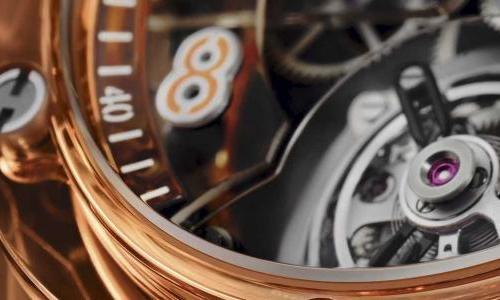