STRATEGIES - The Rise and Rise of
LOUIS VUITTON


STRATEGIES - The Rise and Rise of
LOUIS VUITTON

EXECUTIVE BRIEF • Louis Vuitton has consolidated its watch operations in Geneva, with an eye for synergy and growth. • The Parisian brand hopes to attract a more specialised clientele with its new timepieces. • Its watch designs are directly influenced by the brand, focusing on the experience of travel.

The Parisian house is continuing its push for vertical integration. A visit to its new watchmaking factory in Geneva and a meeting with Hamdi Chatti, director of the watch division.

Louis Vuitton, founded in 1854, certainly took its time. The company waited until the turn of the millennium before entering the watchmaking industry. However, the famous luggage maker didn’t drag its feet: in twelve years it has acquired watchmaking expertise at an impressive rate. The opening this autumn of La Fabrique du Temps, a new building that brings all of the house’s métiers under one roof, provides a telling illustration.

This clean, white campus near Geneva is named after the small workshop founded by two masters of watchmaking complications, Enrico Barbasini and Michel Navas, which Louis Vuitton bought in 2011. The two master craftsmen gave a decisive boost to the luxury giant’s watch division. With the acquisition the following year of another small Geneva company, Léman Cadrans, Louis Vuitton took another important step on the road to integration, and settled permanently in the Haute Horlogerie capital of the world.Today the process is complete, both physically and symbolically, and all of its teams have been transferred from the old production site in La Chaux-de-Fonds to Geneva.

Although we are never allowed to forget that the house’s heart continues to beat in Paris, its brain and its watchmaking technicians now deploy their considerable talents in Geneva. According to the brand’s own publicity, the new manufacture is intended to “promote creative independence”. It admits to three aims: “to master and reinterpret” the secrets of fine watchmaking; to bring together an “independent watchmaking spirit and the dynamism of a venerable company”; and finally, to “nurture the imagination with a sympathetic environment and a high-tech setting.”Judging by the vast spaces given over to the one-hundredstrong team, the watchmaking division clearly has no intention of slowing down.

But before looking to the future, we should take careful measure of what has come before. Beginning with its first collection in 2002, the Tambour, the brand has built a reputation on the watchmaking scene with its GMT, chronograph, tourbillon, spin time and minute repeater models. Today the house is launching two new additions to the Emprise range, and a piece inspired by travel trunks, the Escale Worldtime (see sidebars). Surrounded by his new models and comfortably installed in a brand new building, an understandably confident Hamdi Chatti, Louis Vuitton director of watches, welcomed Europa Star to explain his strategy. Interview.

“Geneva is the international Haute Horlogerie capital of the world, and we wanted to really solidify our position in this sector.”

Why have you brought all your watchmaking activities to Geneva? It was a natural progression. As you know, our original site, which opened in 2002, was in La Chaux-de-Fonds. But we decided to relocate to Geneva after buying La Fabrique du Temps and Léman Cadrans. Geneva is the international Haute Horlogerie capital of the world, and we wanted to really solidify our position in this sector. There were also practical reasons for the choice. From the point of view of travelling, Geneva is far better connected to our Paris headquarters, where I am based. Communication is easier. Of course, we did everything possible to help our teams from La Chaux-de-Fonds make the transition to living in Geneva. One hundred kilometres might not seem like a long way, but in Switzerland it’s a significant distance!

How many employees do you now have in Geneva? Around a hundred. But we deliberately designed this building with surplus capacity. We didn’t build it for two years, we built it to last at least twenty! We therefore have the possibility to keep growing without having to build. It surprises me, the number of manufactures that start to feel crowded just six months after moving in... In fact, it’s not much more expensive to plan for 30% surplus capacity going forward.

“By bringing together different disciplines under the same roof, we are hoping to create a kind of alchemy.”

What are the practical benefits of this consolidation? There will certainly be a positive effect on volumes and production speed. But the real gain is in terms of creativity and innovation. By bringing together different disciplines under the same roof, we are hoping to create a kind of alchemy. That is why the canteen, where all our staff eat together, is probably the nicest area of the new building! If we want to be innovative, our watchmakers, dial-makers and engineers have to be able to talk to each other, challenge each other. 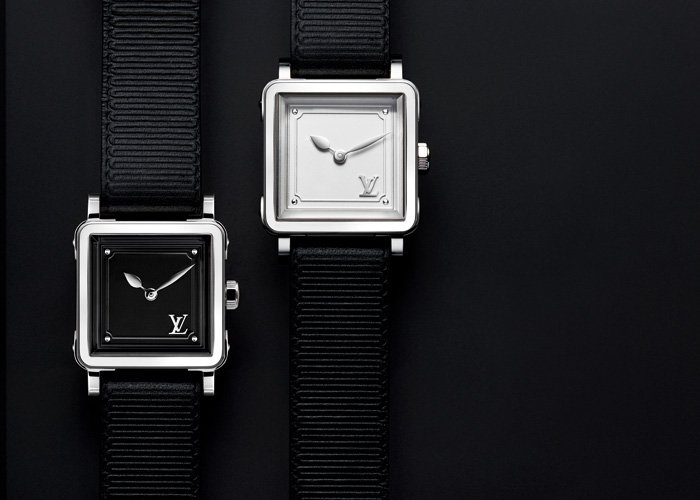 Emprise by Louis Vuitton
Launched in 2014 in yellow gold and steel with diamonds, the Emprise range has been expanded with two new steel models featuring a black or white dial. The horns holding the wrist strap are emphasised by motifs derived from trunk corner-pieces, while the square, symmetrical case is enlivened by reflections in the double-bevelled glass and the sparkle of diamonds. The bracelet is sheathed in leather embossed with a grosgrain ribbon pattern. The dial is either black or white, decorated with lines reminiscent of the wood panelling found in traditional Parisian apartments. The watch face has no numerals, just the initials LV, with an unusual positioning at 5 o’clock.

How far will you take your drive for vertical integration? What I can tell you is that we will continue to work closely with our long-standing external partners. The reason we came to Switzerland in 2002 was to benefit from this wealth of expertise. In general, within the group we consider that jewellery is Parisian, and watchmaking is Swiss. That is another reason we decided to relocate to Geneva, the capital of Haute Horlogerie. We might not necessarily produce any more, but we want to design products that will attract a more specialised clientèle. This is our number one objective.

What about the Poinçon de Genève? That would be the icing on the cake. But it is a long process, taking between 18 months and two years. The Poinçon de Genève not only involves a very precise development process, it also requires specific monitoring. We could apply it to some of our Haute Horlogerie pieces, perhaps by the end of 2015. It will require a great deal of reflection, and the creation of a specific narrative. We don’t want the Poinçon de Genève just for the sake of it, that would be pointless. We still need to find the right story to tell.

Going even further upmarket will also mean increasing the average price of your watches. Absolutely. Our entry prices are still at the 2,500-franc mark, but at the same time there is a trend to reach out to a more specialised clientèle who are interested in a particular watch, which may have a higher price tag than a classic product.

“Given our unique distribution model, which relies entirely on the Louis Vuitton boutiques, we’re not going to open or close any shops at the drop of a hat.” 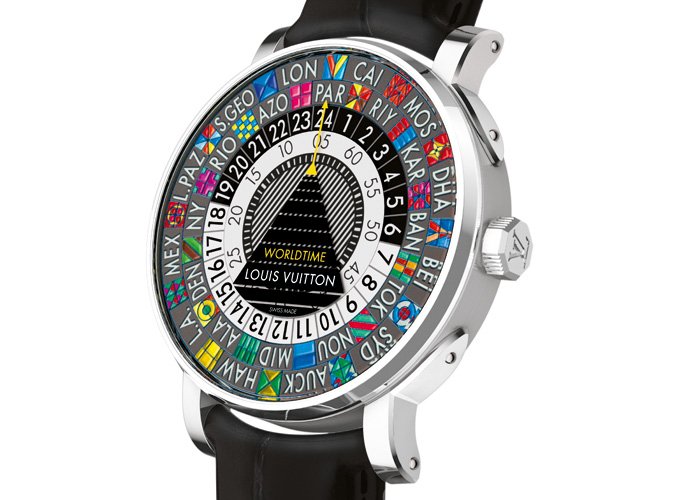 Escale Worldtime by Louis Vuitton
The Escale Worldtime watch draws on the history of the company to reinvent the distinctive features of the travel watch. Louis Vuitton has always offered clients the possibility of customising their trunks with strips of colour, initials, coats of arms and other hand-painted geometric designs. This colourful universe served as inspiration for the creation of the dial of the Escale Worldtime watch. It takes the craftsmen in the dedicated workshop in La Fabrique du Temps 50 hours to complete each dial, using miniature painting techniques and working with oil paint. Over 30 colours are applied one by one with a paintbrush using tiny overlapping strokes, before the piece is dried in an oven heated to 100°C. The ‘Worldtime’ indication, with no hands, is a first in watchmaking design. It is possible to determine the time in the zone represented by a particular city simply by glancing at the corresponding initials. The minutes can be read underneath the yellow arrow indicating the hour in the reference city.

It’s unusual to be inaugurating a new manufacture now, given that the watchmaking industry is experiencing something of a slowdown, particularly in Asia. How do you think you will react? Given our unique distribution model, which relies entirely on the Louis Vuitton boutiques, we’re not going to open or close any shops at the drop of a hat. We simply could not do that. But it is also a strength, as we could attract loyal Louis Vuitton clients, who might not normally think of coming into our boutique to buy a watch.

“We want to offer products that are different but which nevertheless reflect the spirit of the times.”

If you are looking to reach a more specialised clientèle, won’t you also be working through specialised watch retailers? No, that has never been our policy. We will continue to distribute our products solely through our own boutiques. Our hope is that the most devoted watch connoisseurs will spontaneously visit a Louis Vuitton boutique to see our watches. Distribution know-how is part of our DNA, as is keeping our design entirely in-house, and never having sales. Those are our sacred cows, they are non-negotiable! I should also point out that our primary source of inspiration is the company itself. The Escale Worldtime watch, with its time zones and characteristic colours, was directly inspired by our heritage. Louis Vuitton and its history of travel is the point of departure from which we approach the future. We want to offer products that are different but nevertheless reflect the spirit of the times.