On 23 October 2014, a rare example of the Celsius LeDIX portable phone went up for auction by Maître Dufrèche in Besançon (France). “After a frenzied auction involving numerous telephone bidders, Philippe Roland, a Besançon collector, who attended the sale in person, won the coveted telephone for the sum of €11,000 plus fees, making a total of €12,584. At its launch in 2010 the telephone cost €250,000. Only eight were made before the company responsible for the project went into receivership,” reported local newspaper L’Est Républicain.

It all began in 2005, when a young mechanical engineer in industrial design, Thomas Pruvot, had the idea of applying mechanical solutions inspired by watchmaking to the time display of mobile phones. The Celsius concept was born, and all the good fairies of the kingdom were invited to gaze upon the cradle: young entrepreneurs Romaric André and Alejandro Ricart, along with luminaries of the telecommunications industry including Jean-Marie André, and of watchmaking, such as Edouard Meylan (who now chairs H. Moser & Cie), consultant Hugues-Olivier Borès and the famous Richard Mille, who agreed to sit on the board. By mid-2008, Sofinnova Partners, European leader in financing for technology start-ups, agreed to provide funding. 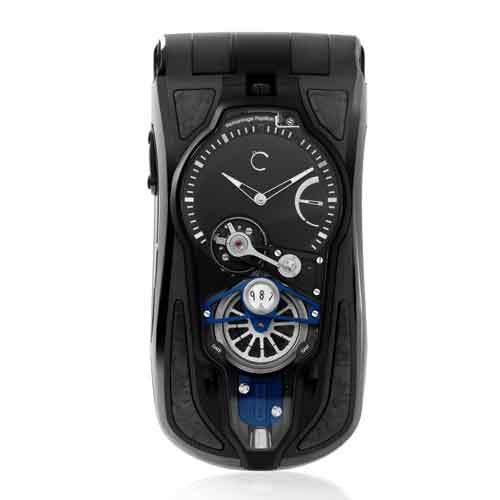 Like the Celsius LeDIX, a hybrid object made up of 600 mechanical components, with an eccentric tourbillon and the patented Butterfly Winding mechanism, the Celsius phones sought to marry mechanical Haute Horlogerie with the world of telephony. The approach was a highly original one, and went far beyond simply setting gold phone cases with jewels. Some innovative solutions were found: the subsequent model, the Optic GMT, was the first to use fibre optics to display information generated mechanically in the bowels of the movement. But despite all these good intentions and a fearsome array of experts, the concept never really took off. Why not? Undoubtedly, the high price of these mobile jewels restricted their purchase to a very small circle of extremely wealthy buyers. The fact that the year of its launch – 2009 – coincided with the financial crisis, and the subsequent watchmaking crisis, certainly didn’t help. It became increasingly unacceptable to display ostentatious signs of wealth. And finally, smartphones really began to come into their own.

In January 2007, Steve Jobs presented the first Apple iPhone, then due to be released in June. The rest is history. Dubbed the ‘Invention of the Year’ by Time Magazine, it took telephony to a crucial new level. From that point on, people would talk about pre-iPhone and post-iPhone. The telephone’s traditional function became just one function of many. In this landscape, which had suddenly been reconfigured from top to bottom, the Celsius remained a stunning and prestigious object, but a marginalised and functionally obsolete one. What lessons can we draw from this failure? Does its unfortunate fate prefigure an equally compromised future for traditional watchmaking in the face of the smartwatch? Probably not. In fact, watchmaking has the opposite problem. The Celsius’s aim was to introduce a mechanical movement into an electronic object, whereas the watchmaking industry is now looking at adding electronic components to a mechanical object whose secular legitimacy is securely established. The watch, still virtually the only jewellery for men, is also protected by its status as a mechanical exception in a world that has become almost exclusively electronic.

Read the rest of our Case Studies (Part 1): Vogard Marvin