China dominates patent applications in watchmaking, particularly in the field of smartwatches. Switzerland focuses more on the mechanical watch, on the display and external parts. Decoding. 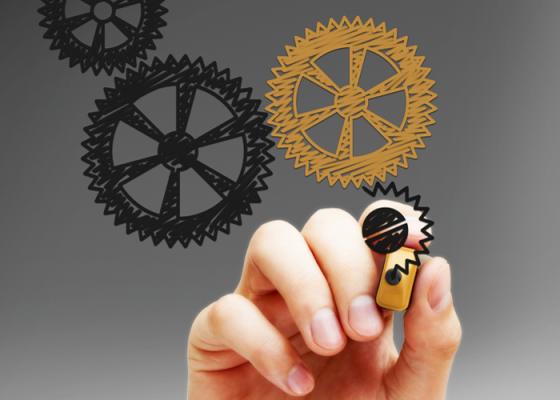 When it comes to collecting information on innovation in a certain technological field, patents are a staple source. It is said that around 95% of R&D efforts around the world are accessible through this type of document, and that more than 80% of this information is not available anywhere else. To protect one’s patent application and not risk invalidating it, an inventor will most likely favour the patent over any other form of communication in the field of watchmaking.Although patents are primarily a source of technical information, their use as a statistic analysis tool continues to increase; the aim is to get a broader view of the market situation. This type of analysis allows for observation of the watchmaking industry’s past and helps offer clues to the immediate future. 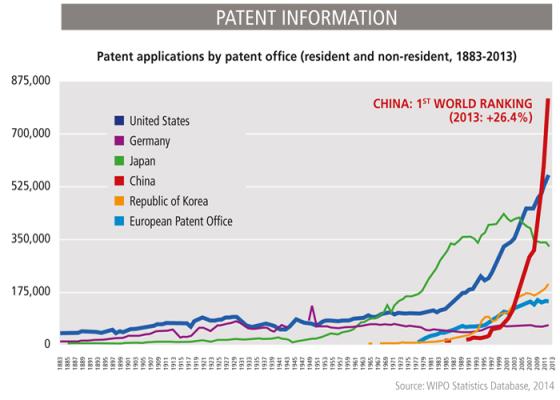 Since 2009 china has without a doubt been the world champion of patent applications, with more than 750,000 protected inventions each year and a 26.4% growth in 2013. 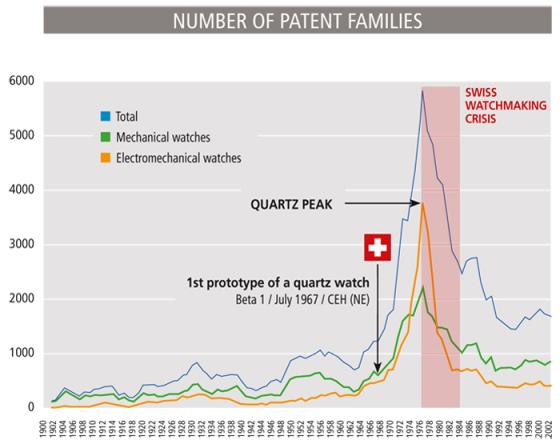 Evolution in the number of patent families (1900-2002) and the crisis in the swiss watchmaking industry.

CHINA DOMINATES THE RANKING IN ALL CATEGORIES

During the year 2013, the last year for which WIPO (World Intellectual Property Organisation) has complete statistics, 2.6 million patents were published, a 9% increase compared to 2012. If we convert that to a daily average, it represents more than 7100 inventions in all technical fields!Amid this great volume, three countries dominate by the numbers of patents filed: China, Japan and the United States. China is without a doubt the patent champion with more than 750,000 protected inventions each year and a 26.4% growth in 2013. It has outranked the United States and occupies the first place since 2009.

A SPIKE IN WATCHMAKING PATENTS IN 1976

By following the evolution of watchmaking patent families [Editor’s note: related patents that share the same priorities] since the beginning of the 20th century, it is interesting to note that the launch of the first quartz clock prototype in 1967 in Switzerland was followed by a colossal increase in the number of patent applications, particularly in Japan. A peak was reached in 1976 with the culmination of the quartz revolution, immediately followed by an unprecedented watchmaking crisis in the Swiss industry. 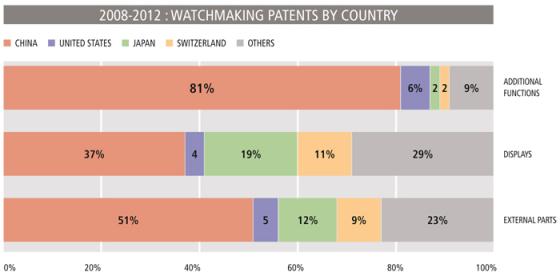 The display and external parts are almost exclusively Swiss and Japanese, whereas Chinese companies focus on additional features.

THE DIFFERENCES BETWEEN CHINESE AND SWISS PATENTS

A quick comparison between the situation in 1974 and 2014 could give the impression that history is repeating itself 40 years later, but with a new participant: China instead of Japan. Once again a nation breaks all the records of patent applications and of utility models. There is, however, a notable difference: compared to the means available 40 years ago, the data analysis process is a lot more advanced today. The possibility of mapping the content and technological orientation of the patents by using specialised software allows for a much more detailed examination of the situation.The watchmaking publications map for the year 2014 immediately reveals a distinct difference in patented subjects by Switzerland and China. While Switzerland focuses on the mechanical watch and its components, China centres its activity on smartwatches and their associated features. The overlapping areas are those of water-resistance, cases and escapements.This difference becomes even more visible when we compare watchmaking patents from China, Japan and the United States between 2008-2012.Over this period, the three categories of watchmaking patent applications that brought in the most activity were additional features (which includes all of the technical developments dedicated to smartwatches), display and external parts.Japan and Switzerland are very active in patent applications in the field of displays and, to a lesser extent, external parts, but things are quite different in the sector of additional features. As a matter of fact neither Switzerland nor Japan had filed for patents in this field until the end of 2012. China’s situation is the exact opposite: 81% of the additional features patent applications around the world were filed by Chinese companies, followed by American companies, which accounted for just 6%..It is therefore very interesting to note that the Apple Watch, which is everywhere at the moment, derives from only 6% of the patents filed by the United States. What about the 81% filed by China? Shouldn’t we expect a tidal wave from Asia in the field of smartwatches? It is obvious that the subject requires special attention. Observing patent applications allows us to prepare for the future. As Napoleon once said: “To be defeated is pardonable; to be surprised – never!”