This name in numbers heralds a new departure for Louis Vuitton, which is launching a more affordable everyday alternative to the polarising Tambour. Could it be the shape of things to come?

Louis Vuitton’s first watch collection dates back to 2002, when the famous Tambour was launched. Its signature drum shape helped the brand to define and promote a highly individual watchmaking aesthetic. But this unique shape, although it effectively ‘beat the drum’ and created a recognisable watchmaking identity for Louis Vuitton, nevertheless had a polarising effect: people either liked it or they didn’t. But this did not stop the Tambour, in its successive iterations (GMT, chronograph, tourbillon, Spin Time and minute repeater), from achieving success and recognition. 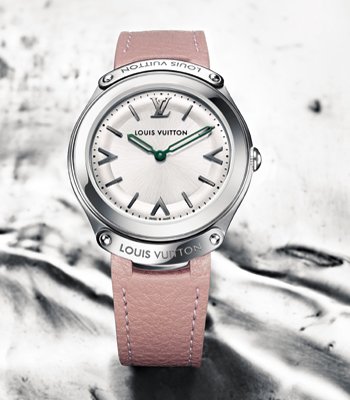 Indeed, it was so successful that Hamdi Chatti felt fully justified in turning the design unceremoniously on its head. The mere fact of being inverted created something that was spectacularly different, and the Tambour has now truly earned its place in the international watchmaking pantheon. It is sold in some 200 points of sale in the mother house’s network of 465 boutiques around the globe.

Nevertheless, in order to overcome the aesthetic objections, Louis Vuitton owed it to itself both tactically and strategically to develop a new collection: a more accessible, more affordable watch – “very recognisable but wearable. Something you can wear every day,” in the words of Hamdi Chatti.

Since his appointment in 2010 as head of Louis Vuitton’s watchmaking division, Hamdi Chatti has focused on two obsessions: making his company a legitimate force in watchmaking circles, and expanding – and thereby diversifying – its range.

As far as the former is concerned, it’s a done deal, with the purchase and integration of La Fabrique du Temps, the horological laboratory directed by partners in crime Enrico Barbasini and Michel Navas, which has given its name to the new manufacture. They are the driving force behind the highly inventive and often whimsical complications that have graced the Tambour, including their showstopping timepiece, the kaleidoscopic, ingenious and much talked-about Escale Worldtime.

The acquisition of La Fabrique du Temps, a low-key but finelytuned horological engine, which since autumn 2014 has brought together all the company’s in-house métiers (one hundred or so engineers, watchmakers, dial-makers etc.), has enabled Louis Vuitton to move ahead with the launch of a new watch line intended to become a long-term collection. This series is aimed at a younger clientele and will no doubt be less controversial. Launched initially in stainless steel, at a retail price of between CHF 3,500 and 4,500, the intention is to move gradually into gold, with gem-set models to be brought out subsequently. “But we’ll take our time,” asserts Hamdi Chatti. “As we are our own retailer we are not under any pressure. And with our day-to-day retail experience on an international scale, we can afford to take things easy.” 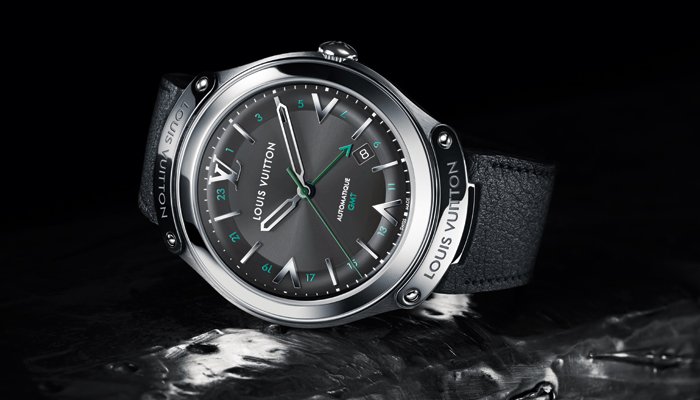 ROUND, LIGHT AND COMFORTABLE

So this is the LV Fifty Five. Why this figure? Classical scholars – there must be a few left – will already have worked it out. LV is the Roman numeral for fifty-five. Brain teaser aside, the LV Fifty Five fulfils perfectly the brief given to the in-house designers: the watch is round, light, highly wearable and extremely comfortable. It is an everyday watch – you almost forget you’re wearing it – but nevertheless instantly recognisable. Beautifully proportioned and elegant, but far from bland. Its design was inspired from the archives of the mother house. The aluminium clasps of a 1920s trunk conveniently provided both an example and a historical reference. The backstory finds its horological expression in the two metal plates riveted onto the case, engraved with the legend ‘Louis Vuitton’. “It’s a reinterpretation of the lock plates that have secured Louis Vuitton trunks since 1890,” we are told.

Mounted on either an astonishingly supple leather strap, or a metal bracelet also inspired by the famous trunk (which proves to be equally flexible and light on the wrist), the LV Fifty Five is both understated and refined. The attention to detail is particularly noticeable on its silvered or anthracite dial with its two concentric convex sections, relief hour markers and hands in a stunning emerald green, which Louis Vuitton is proud to produce entirely in-house.

How will this more accessible and affordable timepiece be received by the brand’s loyal followers, coming as it does after the more strident Tambour? Its launch is imminent. “No hype, no hard sell.” Louis Vuitton will gradually introduce the LV Fifty Five to the market, beginning, by the looks of things, in Japan, before expanding to other shores in 2016. Nevertheless, as the LV Fifty Five starts to make its way in the world and find its own path, the Drum will assuredly continue to beat.

And judging by the satisfied expressions of Enrico Barbasini and Michel Navas who, back at their benches, are busy concocting more in-house complications, the Louis Vuitton watchmaking division has a few more surprises up its sleeve.