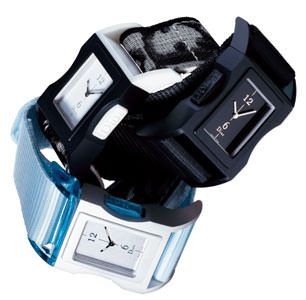 Since 1999, Dior watches have been produced by Paris-based Benedom SA, a part of the giant LVMH. Redesigned by Christian Dior's creative John Galliano, the Swiss Made Dior ladies' and men's watch collections with their modern, provocative and innovative appearance are now one of the leaders in fashion watches.
LVMH do not release individual brand figures, but watch and jewellery sales from the group achieved 552 million euros in 2002 via its network of 648 retail outlets. Net sales by region are France 8%, rest of Europe 29%, North and South America 28%, Japan 14%, rest of Asia 12%, other markets 9%.
With its “porno-chic” advertising campaign and such an innovative model as the Chris 47 watch, Dior has managed to create a watchmaking image unique in its genre that is totally different to the reigning classicism. Like Chanel, but with even more provocation, Dior also illustrates how the world of fashion can influence, in the best sense, watchmaking and mix the frontiers that separate the so-called good taste and the research of a new means of tackling the watch as an accessory.