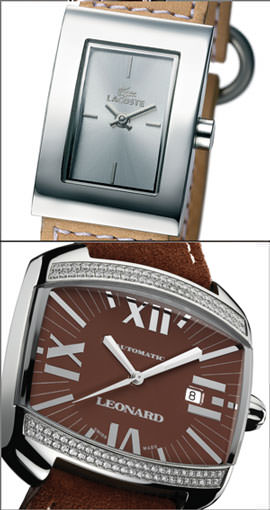 Lacoste
René Lacoste, the famous French tennis player, named 'the crocodile' by the American press for his tenacity on court, had a crocodile designed for him by a friend and then embroidered it on the blazer he wore. He began his sportswear company in 1933 with the renowned crocodile logo on his revolutionary tennis shirts - probably the first known brand logo to be used on the outside of a garment.
Lacoste watches were launched in 1994 and won the 'watch of the year' award. More than 400,000 Lacoste watches have now been sold and in the last couple of years the brand has enjoyed a growth of 35% annually. The latest collections of men's and ladies watches, Sport, Sportswear, Club and Classic, reflect the dynamism and the naturally simple elegance of the brand.
The principal markets for Lacoste are in Europe. However, the watches have now been launched in Asia, with Japan and China being the most important markets. The rest of the world distribution will be completed over the next two years.

Leonard
Leonard was founded in 1958 by Jacques Leonard with Daniel Triboullard as its designer. After an unsuccessful attempt to launch a fashion watch brand, the company turned to a new company in Geneva - Leonard SA. to create and market a completely new look with innovative styles of timepieces. Headed up by Ricardo Guadeloupe, the watches were launched at the Basel Fair in 2001 to an almost immediate success.
From the beginning, the watches were designed to appeal to a young and lively clientele by offering a strong visual appeal with two collections called Screen, Sphère and its latest creation, Curve. The watches combine an elegant trendy look with watchmaking excellence, offering mechanical and quartz models in stainless steel or gold, with or without diamonds.
Today, Leonard watches can already be found in around 100 points of sale in 15 countries, including the USA, Russia, Hong Kong, Singapore and China.