The global launch of the Lange 1 Time Zone


On the occasion of the spectacular worldwide launch of the new timepiece from A. Lange & Söhne, the Lange 1 Time Zone, we had the opportunity to visit the company’s factory, located in the small town of Glasshütte, not far from Dresden. This visit confirms the exceptional work being carried out by the German master watchmakers.

The global launch of the Lange 1 Time Zone

On the occasion of the spectacular worldwide launch of the new timepiece from A. Lange & Söhne, the Lange 1 Time Zone, we had the opportunity to visit the company’s factory, located in the small town of Glasshütte, not far from Dresden. This visit confirms the exceptional work being carried out by the German master watchmakers.

Our curiosity was growing… Used to making regular visits to all of the Swiss manufactures as well as other ateliers in Switzerland, we wondered what the Saxon facility would be like, how it would differ from its Swiss counterparts, what would be the basis of its particular excellence. We were not disappointed.
Created in 1845 by Adolphe Ferdinand Lange in Glasshütte, not far from Dresden, which already in the 16th century was producing remarkable timekeepers, the factory was bombed in 1945, and then nationalized by the East German government in 1948. It rose up from the ashes after the fall of the Berlin Wall and the reunification of Germany in 1990, thanks to the efforts of one of the family’s descendents, Walter Lange, and one of the greatest visionaries of contemporary watchmaking, Günther Blümlein. At the head of Jaeger-LeCoultre and IWC, then belonging to VDO-Mannesman, Blümlein greatly contributed to the revitalization of the Lange manufacture. Unfortunately deceased much too early, in 2001, soon after his watch unit was purchased by the Richemont group, Blümlein nonetheless was able to actively participate in the veritable renaissance of this notable example of haute horlogerie situated in the heart of the distressed German zone. 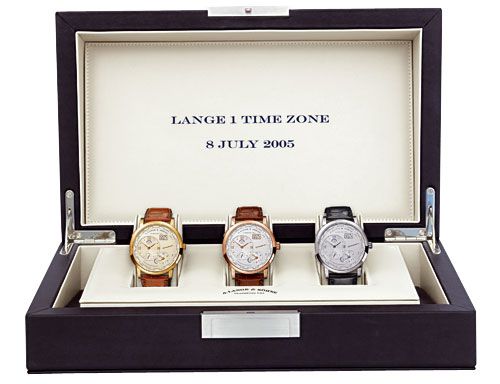 A complete manufacture
Glasshütte, tucked away in a small valley and now a lively little town, is at the core of German timekeeping excellence. Today, about 340 people proudly work in an incredibly attentive and concentrated ambiance. They produce ‘several thousand watches per year’ entirely in-house, except for the cases, and even these will be integrated into the manufacture over time.
Starting in 1994, new calibres, totally developed by Lange, as well as the technical innovations that followed (the Lange 1, the ‘Pour le Mérite’ tourbillon, the Saxonia, followed by the Arkade) made a lasting impression on the watch landscape. Yet, it is perhaps the innovation of the Grande Date, reproduced since then by nearly all watchmakers, that attracted the attention of market observers around the world to this “new” German company that had the audacity to come and compete in the terrain reserved for Swiss watchmakers.
Since those days, Lange has taken major new steps on the road to total autonomy in its production, notably with the fabrication of its own balance springs beginning in 2003.

Excellence
What is most impressive for the visitor is not simply the large amount of very high-tech and ultra-modern equipment in the factory, but also the extreme manual care given to the realization of each movement. Made for the most part in nickel silver (a material that is magnificent but difficult to work with since it is prone to scratching), the various component parts of the different calibres and movements are assembled twice (which is rare enough for us to mention it): first with mounting screws, and secondly with blued screws. After the first assembly, the movement, whose operation is duly checked, is dismantled, decorated, and then engraved before the final assembly. Extreme attention to detail of each part, no matter how small, includes delicate trimming, hand circular graining, bevelled edges with rounded corners, various engraving techniques, and the ‘Côtes de Glasshütte’ decoration, which is a little larger than the Côtes de Genève pattern. This particular care, alone, justifies the relatively high price of Lange & Söhne watches.

The Lange 1 Time Zone
This level of excellence has been particularly showcased with the worldwide launch of the latest Lange achievement, the Lange 1 Time Zone. Faithful to its conception of haute horlogerie, which must ally beauty, readability and simplicity of use, Lange chose two decentred dials each with its own independent day/night indicator. Using a system which allows easy adjustment, the wearer can select which time zone is to be displayed on the largest of the two dials: home time, or the local time in a particular country, or any other time zone. The second time zone can also be easily selected using a pushbutton and a rotational city ring. With each push, the city ring and the hands of the second time zone advance simultaneously one notch and one hour. The large date is automatically synchronized with the larger of the two dials.
This ingenious mechanical device has been added to a manual winding Lange movement, the L031.1 calibre with a double barrel and a power reserve of 72 hours. 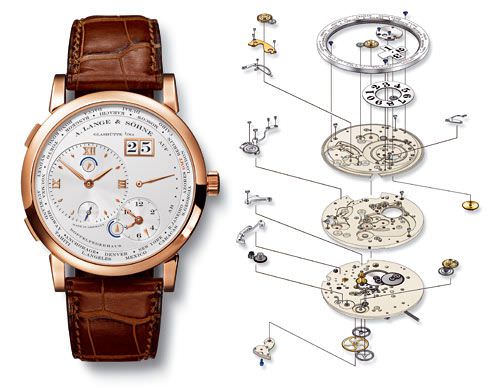 A global launch
The launch of the Lange Time Zone involved a highly original operation on an international scale. In order to “see the watch function in real time,” as explained by Fabian Krone, the brand’s young CEO, the launch was carried out “simultaneously” in 35 metropolitan areas on all continents.
A case with three watches (yellow gold, pink gold and platinum) was entrusted to each of 35 “ambassadors” (all watchmakers working at the Glasshütte factory) who were responsible for handing them over to 35 agents in their respective cities. A satellite link was organized for the event, which connected, in real time, the small Saxon town with, among other cities, Berlin, London, Moscow, Hong Kong, Tokyo, Buenos Aires and New York. The crowd assembled in Glasshütte shared the event with invited guests from around the world, for example, in the CBS studio in New York City’s Times Square, in Munich’s Allianz Arena, in an elegant traditional restaurant in Tokyo, etc., where ten satellites, 39 television crews, 350 technicians, 200 monitors were set up, and 15,000 invitations were sent out.
This launch says a lot about the ambitions of A. Lange & Söhne. The brand wants to fully revitalize German haute horlogerie, and to tell the world about it with inventiveness and originality.