Urwerk Re-invents Time (or at least its perception)


Urwerk Re-invents Time (or at least its perception)

One timepiece was especially impressive this year at Basel, the Opus V from Harry Winston. A totally new way to display time, it is unlike any other, a veritable watchmaking feat in three dimensions.
Many people were asking themselves where this ‘UFO’ came from. This is because they did not know about the very special work carried out by a young watchmaker named Félix Baumgartner, a member of the Horological Academy of Independent Creators (although, we must add that Europa Star regularly hinted about it in its columns). Along with his associate, designer Martin Frei, Baumgartner creates mechanical watches that are radically different from everything we know. So, the Opus V does not come from outer space, but rather it is the logical result of a process that is as rigorous as it is inventive, the fruit of the labours of the young Geneva brand, Urwerk.
This work is also innovative on an aesthetic level because it is a cross between tradition and contemporary experimentation. It is also innovative in terms of its time display, since it is a mixture of digital and analogue indicators (“My watches are semi-digital, semi-analogue,” declares Félix Baumgartner). Finally, it is innovative because of the technology it employs to arrive at the spectacular three-dimensional Opus V.

The satellites
In the beginning, Baumgartner had the idea of using satellites. The hour indication was no longer given by hands at the centre of the dial but rather by four pivoting satellites, each placed at the end of an arm, an orbital cross, and each carrying three hour numbers. These satellites appear alternatively on a minute scale that they travel along during one hour before disappearing, leaving the place to the following satellite carrying the following hour. 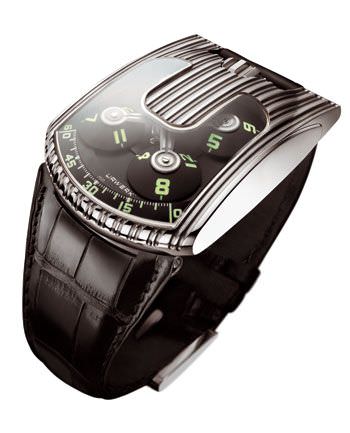 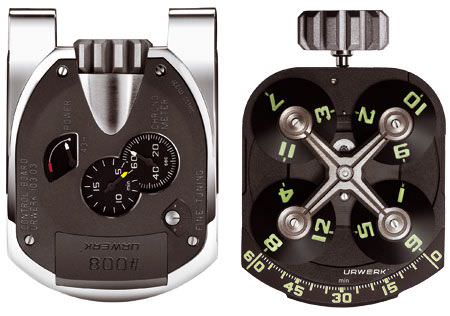 
“Our first watches seemed mysterious,” explains Félix Baumgartner. In fact, only one small opening was made at the base of the watch, engraved with the minute scale, so that the satellite mechanism was not apparent. The hour number seemed to appear as if by a magic, moving up the minute scale and then disappearing. Gradually, the opening was enlarged. In the latest model, the Ur-103.03, the orbital cross system and the satellites are largely visible, under a very complex sapphire crystal, thus allowing the viewer to understand the orbital mechanical process.
“Besides the technical aspects,” insists Baumgartner, “the watch’s owner can read not only the time, but he can also see the future time arriving and the past time moving away. This visual experience of time is unique.”
The satellite concept then gave birth to the cube system used by the Opus V, and the back of the watch gave birth to another remarkable idea – a ‘very simple’ idea but one that made many large brands green with envy - a five-year service indicator for the watch!
In fact, on the back of the Ur-103.03, there is a power reserve indicator (43 hours) and two small traditional dials displaying the minute and the second. In case of necessity or to finely adjust the watch, the wearer can also refer to this indication, which is more precise than the minute scale on the top of the watch. The watch’s owner thus has access to a unique function and can finely adjust the timepiece to a precision of less than 30 seconds deviation over a 24-hour period. This ‘control board’ resulted in the service indicator of the Opus V. 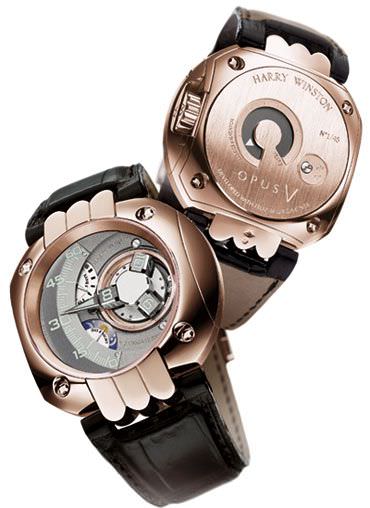 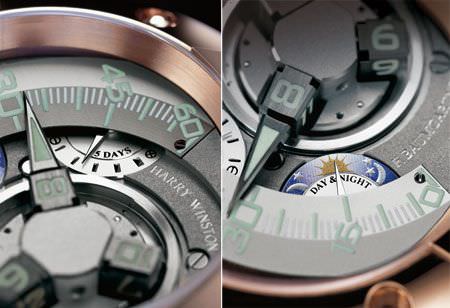 Long hours of reflection
It is readily clear then that the Opus V did not come from spontaneous generation, but is the result of long hours of reflection on time, its functions, and its display.
By replacing the satellites by cubes, Félix Baumgartner and Martin Frei succeeded in giving a true spatial dimension to their watch. From four satellites, they went to three cubes whose four faces carry the different hour numbers. But the basic principle, involving the Maltese cross and ball bearings, posed new challenges. For example, not only do the cubes revolve in an orbital fashion, but they also rotate on themselves, revealing thus a new hour number. In addition, when the cube arrives at zero on the minute scale, it drags the large minute hand along the scale (before, the satellite, itself, indicated the hours by its own trajectory). One of the most difficult problems was to make the minute hand return instantaneously once it reached 60 so that it could accompany the new cube, thus the new hour. The solution is a spring, a spring that is very delicate to make (a wire with a thickness of 0.05 mm), which provides minimal but constant force.

Autonomy
One of the most remarkable aspects of this entire process is that Urwerk produces its watches completely in-house, in collaboration with a case manufacturer that provides its five-axis CNC machines for use by the brand, thus giving almost total autonomy. “We are of the new generation,” insists Baumgartner, “and we work with all of today’s existing possibilities. We are anchored in traditional timekeeping, of course, but also in modernity. This is also why we are a little different. Martin Frei, our designer, does not come from the world of watches, and so he doesn’t have the weight of timekeeping tradition on his shoulders. His approach is therefore more serene, freer. Moreover, I believe that watchmaking still makes sense on condition that it reinterprets the indication of time in a new manner. In five years, we are going to come out with new ideas in this domain. I have ideas notably on constant force, and I hope to be able one day to develop a movement whose principles will be entirely new.”
Quite obviously, the Opus V project, conducted in concert with Harry Winston, has given new visibility to Urwerk. But even without this prestigious relationship, the progress of the young brand has been constant and it will continue to become even stronger. The name ‘Urwerk’ itself contains this promise. ‘Ur’ is the name of one of the first cities in the world, erected in what is today the nation of Irak. Wasn’t it in this region of the world where the notion of measuring time was actually inventedı
What remains is how to reinvent it.