Customers of rare and costly objects generally do not know the secrets of their fabrication. In their opinion, only the results count, and to heck with the rest. Brands understand this fact and are in the business of selling dreams, not assembly instruction booklets. Yet, all objects have their past. Watchmakers, however, do not seem to want to reveal these mysteries. It is a shame because the story behind an exceptional watch is often quite wonderful. In the present case, it is wonderful, simple and grandiose like the countryside in the Jura mountain region of Switzerland. 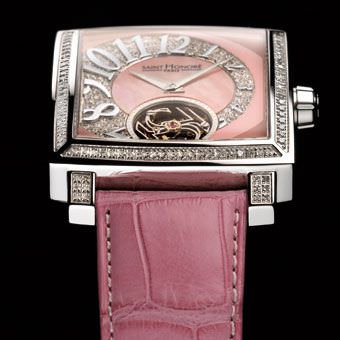 The story of the ‘Tourbillon Saint-Honoré Paris 1885’, unveiled at the last Baselworld show, begins in Porrentruy, a small medieval town full of history, in the Swiss canton of Jura, a land of painters and poets, and one of the most beautiful places on Earth. In the beginning, there was a meeting in a small café - this is a tradition for conducting business here - between Thierry Frésard, the Managing Director of the Saint-Honoré brand, and his future supplier, a local manufacturer specializing in tourbillon cages (the usually visible space in the watch where the tourbillon mechanism can be admired in all its splendour). Who was this supplierı The Managing Director, thinking that he has already said too much, does not say. The two men reached an agreement back at the beginning of 2004, so it is obvious that things happened quite quickly afterwards.
Saint-Honoré is a family enterprise, managed entirely by Thierry Frésard. A little over a year and a half ago, the decision was his, and his alone, to add the world’s most prestigious watch model - a tourbillon - to his catalogue. He gave it a lot of thought before taking the big step into this industrial and commercial venture. “I understand only too well that, in watchmaking, the tourbillon phenomenon is no longer the exception,” he explains. Nonetheless, the product confers prestige and image to the brand that can meet the challenge of making one.
Saint-Honoré is located in Charquemont in the French department of Doubs, not very far from Porrentruy, and employs about 40 people. It was created about 20 years ago as a continuation of the manufacturer Victor Frésard, founded itself in 1885, the year that gives its name to the recent tourbillon. If Saint-Honoré does not seem to have the outward appearance of a watch manufacturer, it is nonetheless a watch enterprise, and not simply a fashion house. In this respect, it is the serious and respectful image that the fourth generation descendent of the Frésard family wants to impose. “We are a Paris house with Swiss technology,” says Thierry Frésard. In fact, all the brand’s watches, and they make about 50,000 per year, are Swiss Made.
The design of the Tourbillon 1885 was conceived by a “Parisian designer” according to Frésard, without being more precise. Two superb models of the watch are currently being displayed at the brand’s flagship boutique in Paris on the Rue Saint-Honoré, from which the brand takes its name, in memory of the stay of one of his ancestors in this same street.
To touch and feel this object is certainly a privilege. It is lighter than one might imagine. Intended for an essentially feminine clientele (two of the seven models are men’s watches), the Tourbillon 1885 will enhance the beauty of a delicate wrist without being overbearing. The price ranges from 40,000 to 60,000 euros.
Twenty timepieces have been produced so far. Twenty more should be ready soon. “Up to now, we have invested about 250,000 Swiss francs in the creation of the Tourbillon 1885, all taken from our own funds,” says Frésard. He naturally hopes that this investment will pay off. “We have positive results from the sale of all our watches, with the most expensive costing 3000 euros. The goal is to increase our production volume by ten percent a year,” he adds.
From now on, Thierry Frésard has a tourbillon in his product line up, the fantasy of the watch world. Five customers, in Japan, Saudi Arabia, and Morocco, have already purchased one of these precious pieces. The owner of Saint-Honoré would like to see this treasure of his brand become more than just a “collector’s piece.” He does not, of course, speak of widespread distribution considering the price, but rather is betting on a sort of routine buying. After all, for those many people around the world who have the means, a purchase of 50,000 euros is nothing exceptional. Thierry Frésard also wants to have an ambassador to represent his new Tourbillon 1885. It seems that a famous young French woman is on the point of signing such a contract.