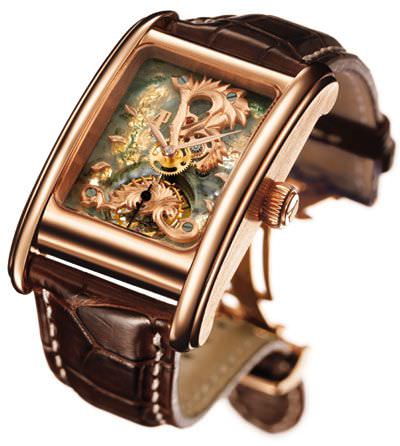 At the confluence of Haute Horlogerie and decorative art, Audemars Piguet has created a small marvel of equilibrium and refinement: the Edward Piguet Moss Agate Tourbillon.
Moss agate is a semi-transparent natural stone belonging to the chalcedony family. Its name is derived from the small plant-like mineral inclusions in the stone, making each piece quite unique. However, the irregular structure of moss agate makes it a difficult stone to work with, and it is impossible, for example, to use the classical methods such as diamond-bit shaping. In order to cut the moss agate plate that serves as the base of the movement, Audemars Piguet had to develop an ultrasound technique using a liquid-based abrasive – a world’s first in watchmaking. 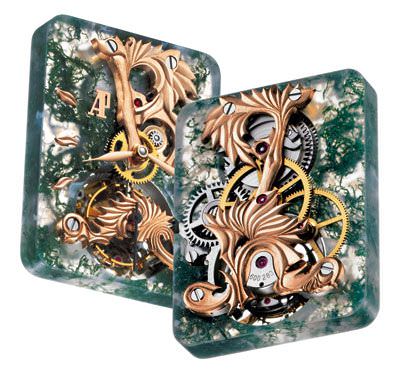 Five years of research and development were necessary to master this process, which offers an irreproachable level of quality in the cutting and surface treatment, with a precision of around a hundredth of a millimetre. But at the same time, it is an extremely slow process, taking one hour to remove 1 mm of material.
Overcoming the technical difficulties is only part of the process. The artisan must choose the strongest parts of the stone, then create the dial, in much the same way a painter would, by finding harmonious positions of the inclusions in relation to the tourbillon and the floral arabesques of the bridges that are sculpted and hand-engraved in pink gold. Unique and discreet, the watch reveals all of its transparent splendour when held up to the light. 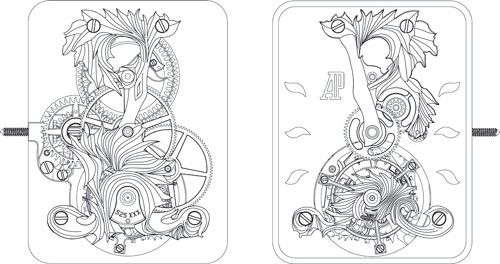 The tourbillon cage, enclosing the escapement and the balance, appears in a circular opening carved in the agate. The small seconds hand is supported by its axis. The tourbillon is energized by a hand-winding mechanical movement, with adjusting screws, that beats to the rhythm of 21,600 vibrations per hour.
Entirely decorated by hand, the movement is 6.51 mm thick and measures 28.8 mm by 21.8 mm. It has a power reserve of 48 hours.
It is truly a beautiful and refined creation from the venerable Vallée de Joux manufacture.