The new escapement by Audemars Piguet, a turning point in precision watchmaking


The saga of watchmaking is intimately linked to the evolution of an essential component of the watch, the escapement. As we know, the escapement maintains and counts the oscillations of the watch’s regulator organ, the spring barrel. A distributor of energy stored in the barrel, which comes to it via the gear train made up of the centre wheel, third wheel, fourth wheel, and the escape wheel, the escapement has been the subject of in-depth research aimed at improving its functioning, reliability, precision, and resistance to shocks.

The new escapement by Audemars Piguet, a turning point in precision watchmaking

The saga of watchmaking is intimately linked to the evolution of an essential component of the watch, the escapement. As we know, the escapement maintains and counts the oscillations of the watch’s regulator organ, the spring barrel. A distributor of energy stored in the barrel, which comes to it via the gear train made up of the centre wheel, third wheel, fourth wheel, and the escape wheel, the escapement has been the subject of in-depth research aimed at improving its functioning, reliability, precision, and resistance to shocks.

Over the years, an escapement system was created and labelled the ‘Swiss escapement’. But even before it saw the light of day, the most important names in timekeeping were preoccupied with the problem and each came up with his own particular solution. Thomas Tompion developed the ‘deadbeat’ escapement in 1695, which in spite of its faults, was used in ordinary timekeeping until the end of the 19th century. A variation of this escapement was the cylinder escapement perfected by Georges Graham around 1725, which facilitated the construction of flat timekeepers but which was very delicate to fabricate. There was also Leroy’s detent escapement created in 1748. The Swiss escapement was developed by Thomas Mudge in 1759 but it was so difficult to adjust that he gave up on it. It was only in the next century, with the efforts of Georges Leschot, that this escapement was perfected and largely adopted for timepieces of quality.
During this vibrant period, timekeeping research played a major part in the technological research of the era, and stimulated the imagination of more than one person, including Beaumarchais, future actor of the Barber of Seville, who presented a ‘double virgule escapement’ in 1752.

The escapement of Robert Robin
It was in this context that Robert Robin (1742–1809), former watchmaker to King Louis XVI, presented, in 1791, a new escapement inspired both by the Swiss escapement and the detent escapement. This unusual and ingenious combination offered the advantages of the detent escapement in terms of efficiency, as well as the advantages of the Swiss escapement, which offered better reliability. But, in spite of its advantages, this direct impulsion escapement did not enjoy an immediate future. Actually, it had a large defect. It was extremely sensitive to shocks because of certain details of its geometry. In addition, it was very complex to produce because it demanded so much precision in the machining of its parts that it exceeded the technical possibilities of the epoch. So, the Robin escapement, along with quite a few others, was therefore relegated to the history books, while the Swiss escapement began to enjoy an unrivalled reign.

Research directions
Yet, the quest for precision, reliability, and resistance by watchmakers still continued. This search intensified during the mid-1980s, with the spectacular renaissance of mechanical watchmaking. Research in this area took two directions. The first involved efforts that led to the progressive improvement of the Swiss escapement, especially in terms of materials (for example, the recent use of silicon), in lubrication (improvement in oils), and in geometry (profile of the teeth, for example).
The second direction has been the evolution of the escapement itself, leading to the development of new mechanisms. The latter road has been little explored and the only notable innovation up to now has been the mixed impulsion co-axial escapement developed by George Daniels in 1988, and then adopted by Omega, which has progressively equipped most of its watches with this system. 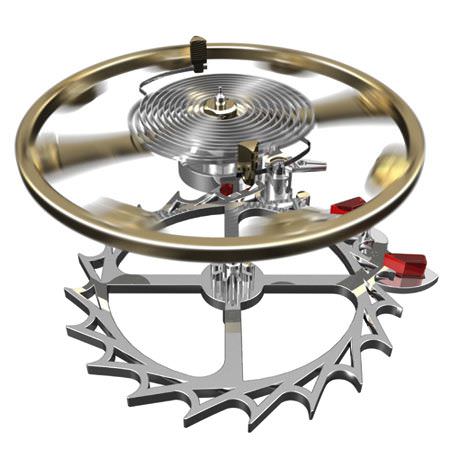 
The advantages of the new Audemars Piguet escapement
Travelling down this same isolated road of innovation, Audemars Piguet decided to try and develop a new type of escapement, rather than simply attempt to improve the Swiss mechanism.
Taking inspiration from the famous Robin escapement, the watchmakers at Audemars Piguet came up with a completely new system of direct impulsion that has many advantages over its competitors.
Although directly derived from Robin’s invention, it has several notable differences. First of all, it improves the major shortcoming of the old system, which was its sensitivity to shocks. Thanks to a new ‘safety finger’ mechanism that prevents all accidental displacement of the ‘fork’ (see illustration 3), the new Audemars Piguet escapement offers absolute protection against shocks. Yet, it has other advantages as well. 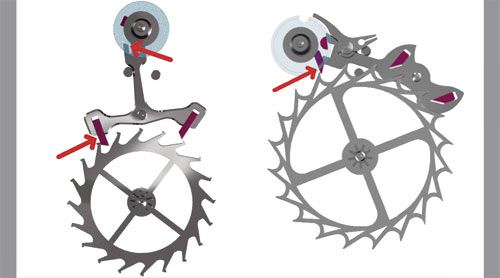 
1. Because it uses direct impulsion, the energy transmission in the Audemars Piguet escapement is made directly from the escapement to the balance without the intermediary of a lever. It therefore has less moving parts in comparison to the Swiss escapement. Its efficiency is thus better, and is also quantifiable. In a Swiss escapement, the escapement itself absorbs 65 percent of the energy, while the Audemars Piguet mechanism only absorbs 48 percent. This difference thus accounts for the increased efficiency of the latter system.
This efficiency is amplified even more because the impulsion that maintains the movement of the balance is direct; only one impulsion corresponds to two vibrations. Besides the high output that is attained, the perturbations in the adjustments are also decreased. 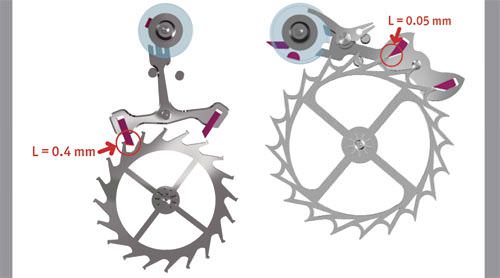 By reducing the length (L) of sliding, the need for oiling is eliminated.


2. Another advantage is that the geometry of Audemars Piguet’s direct impulsion escapement, which decreases the length of the slide on the lifts, does not require lubrication. Eliminating the need for oiling facilitates the maintenance of the mechanism by avoiding the accumulation of a greasy paste that forms after the evaporation of the oil.
The better efficiency also means an improvement in the working reserve; the less energy that is consumed means a longer working time. This improvement in chronometry is helped greatly by the absence of lubrication, which offers the possibility of increasing the frequency beyond 36,000 vibrations per hour (which would be hazardous if the mechanism required lubrication since the oil would be dispersed outside of the mechanism itself). A frequency in the order of 43,200 vibrations per hour can be attained.

Thanks to its safety finger, the AP escapement provides total protection against shocks.


3. The weak link in the Robin escapement – its great sensitivity to shocks – has been removed, thanks to the redesigned shape and the ultra precise machining of its component parts. A new ‘safety finger’ system prevents any accidental displacement of the ‘fork’, therefore guaranteeing optimal security against ‘tripping’ (the accidental passing of two teeth of the escape wheel instead of one), and against ‘overbanking’ (the irregular movement of the fork from one of the banking pins to the other). 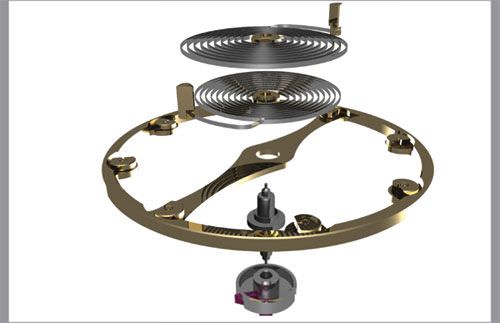 Two hairsprings offset at 180° to each other provide a better balance and a better regulation.


4. The adjustment of the escapement is assured by two hairsprings placed on top of each other but offset at 180°. This particular disposition optimizes the mechanical precision by automatically compensating for possible defects in the equilibrium of the balance. It also allows for the replacement of the terminal curve, which is very delicate to make by a single spring barrel, thus allowing for better regulation.

Trials conducted over five years by the watchmakers at Audemars Piguet have demonstrated that this new escapement has presented optimal working stability over the long term.

Public premiere
For its public launch, the new escapement by Audemars Piguet has been placed in the Cabinet N° 5 model, belonging to the Tradition of Excellence collection, where it is joined by an original perpetual calendar with a linear display. Visually and aesthetically, this piece is both daring and spectacular. The very technical, three-dimensional, and cut-away architecture opens to the beating heart of the watch, nicely showcasing the new escapement, the double spring barrel, and the variable inertia balance. The modernity of this approach to watchmaking is emphasized even more by the very contemporary design of the off-centred sub-dials: the dates in red surrounding the hour and minute dial, indicated by the tip of a red hand, the month appearing in a window at 12 o’clock, the day in another window at 6 o’clock, the leap-year cycle visible in the hour and minute dial between the numbers 12 and 1, an independent deadbeat seconds hand on the dial in an off-centred sub-dial at 7 o’clock, and a power reserve indicator (7 days or 168 hours) displayed on another sub-dial positioned at 11 o’clock. 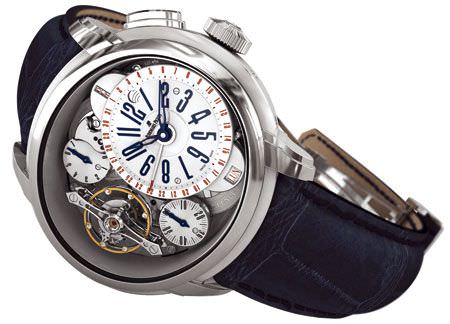 
Clarity, readability, ease in utilization: the calendar indications are adjustable using a pushbutton and correctors located in the middle of the case; setting the time backwards is possible, even when the perpetual calendar is working, without risk of damaging the movement; the deadbeat seconds hand, which makes one jump per second, can be stopped without perturbing the watch’s operation.
At the back of the watch, the two barrels are visible and, as they turn, they gradually reveal the engraving, Audemars Piguet and Tradition d'Excellence. These two barrels can also be seen from the back side of the case, which is protected by a sapphire crystal and whose decorative geometry reinforces the technical aspect of the piece.
Edited in a limited series of 20 pieces in platinum, this piece will most certainly delight collectors who can pride themselves on owning a watch that superbly marks the ‘historic’ beginnings of a new escapement. Over time, Audemars Piguet has already announced its intention to gradually equip all of its watch production with this new escapement.