The first integrated chronograph with 1/100th of a second


The first integrated chronograph with 1/100th of a second

Already in 1916, Heuer introduced its Mikrograph, the first sports stopwatch, accurate to 1/50th of a second and 1/100th of a second. This represented a major advance in this domain since most stopwatches of the day were precise to only 1/5th of a second.

Ninety years later, at BaselWorld 2006, Heuer, since called TAG Heuer, presented its Calibre 360, the first mechanical wristwatch chronograph in the world capable of displaying 100th of a second. The Calibre 360 was already equipped with two balances and two separate escapements. One was manual-winding, beating at 360,000 vibrations per hour, allowing for the operation of the chronograph without interfering with the movement and the time displays. The other was an automatic calibre beating at 28,800 vibrations per hour. Three patents crowned this piece: the display of 1/100th of a second on an automatic chronographic watch; the bidirectional winding system using only one crown that let the wearer set the watch in one direction and wind the manual chronograph calibre in the other direction; and a system of transmitting the date from the lower module to the date display under the dial. 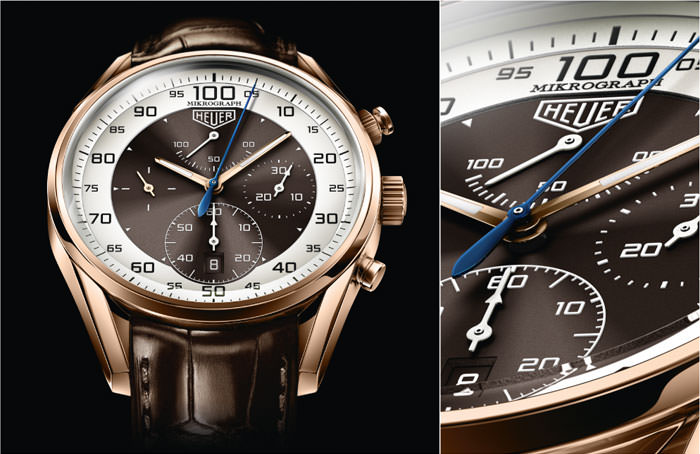 The Heuer Carrera Mikrograph 1/100th Second Chronograph
This year, TAG Heuer takes another step with the introduction of the Heuer Carrera Mikrograph 1/100th Second Chronograph. Another step because, unlike the modular Calibre 360, this new COSC-certified chronograph is totally integrated and its operation is controlled by a traditional column wheel. Two escapements share the confined space of the movement, a 15 ¾’’’ measuring 35.8mm in diameter and 7.95mm in thickness. Its traditional 4Hz escapement beats at 28,800 vibrations per hour for time functions and its high-frequency, 50Hz escapement beats at 360,000 vibrations per hour for the chronograph functions. The hundredth of a second is shown by a central hand, which rotates around the dial in one second in 100 successive jumps, a speed that prevents any visible jumping. This hand points to a circular scale going from 0 to 100 indicating, in an extremely visible manner, the hundredths and the tenths of a second. The activation and de-activation of the chronograph does not interfere at all with the normal operation of the watch. The energy for the chronograph is supplied by a manual-wound barrel whose 90-minute working reserve is displayed on the dial at 12 o’clock on a scale going from 0 to 100 per cent. The winding of the watch itself is automatic using a traditional rotor providing a working reserve of 42 hours. The manual winding of the chronograph also acts upon the winding of the watch since the two separate barrels are linked. At the back of the piece, we can see the rather unique sight of the two balances next to each other and beating at different rates.

From a design point of view, the Heuer Carrera Mikrograph 1/100th Second Chronograph features a classic dial with high readability. Its brown and cream dial, the minute counter at 3 o’clock, the seconds counter at 6 o’clock and the small seconds at 9 o’clock are placed in a very harmonious manner. The highly technical nature of the piece is discreet yet elegant in the 43-mm polished case made of 5N pink gold, as are the crown and the push-pieces. A double anti-reflective slightly rounded sapphire crystal protects the dial.

To complete the ensemble, a semi-instantaneous jumping date is placed in a window at 6 o’clock. The Heuer Carrera Mikrograph 1/100th Second Chronograph is mounted on a brown alligator strap with a tongued clasp in 5N pink gold and is available in a limited series of 150 pieces, all individually numbered on the oscillating weight. 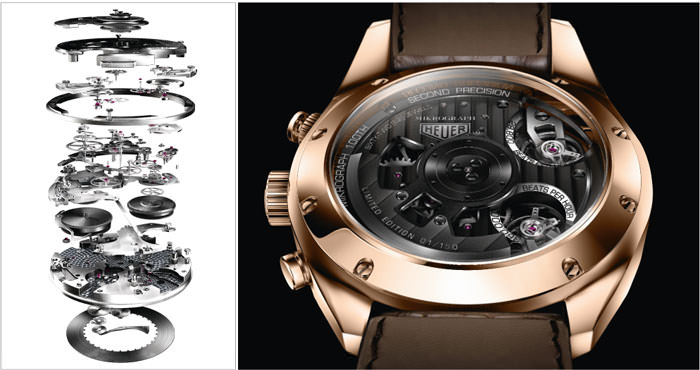