César Jean-Mairet, founder of Jean-Mairet & Gillman, didn’t grow up in the watch industry, though his family has a long heritage in watchmaking. As a result, Jean-Mairet has always been aware of watches and was determined to design watches one day. Sidetracked from his true passion, he studied engineering and after obtaining his degree, went to Togo and Saudi Arabia to build electrical power plants.
Tiring of that, Jean-Mairet got his MBA in financial studies at the University of Geneva. After years of working for a number of prestigious financial institutions, he then founded his own company. But he still thought about watches.
Finally, in 1999, he created the brand Jean-Mairet & Gillman, combining his love for watches with a family tradition of watchmaking mechanics and technology.

Family history
The Jean-Mairet family came to the Neuchâtel region in the early 16th century. In 1566, Jean-Henry Mairet invented a seven-shot pistol and a machine tool for the watchmaking industry.
Then, in the 19th century, Sylvain Jean-Mairet, master watchmaker, became a maker of lever escapements, precision watches and chrono-meters. He invented a double stem-wind watch and perfected several lever devices.
The family heritage continued into the 20th century, when watchmaker André Jean-Mairet was appointed chief of the workshops at the École d’Horlogerie du Locle. His father had been a teacher of precision timing at the school and this was also André’s main area of interest. During his career, André won 119 first prizes from the Observatoire de Neuchâtel for his watch-making and secured two records for his chronometers.
The Gillmans form the other branch of César Jean-Mairet’s family tree. They trace their roots back to a family of scientists who travelled the world during the Victorian era. In fact, César Jean-Mairet’s great-great grandparents were none other than Robert Gillman and Caroline Bovet of the famous Bovet of Fleurier family of watchmakers. Bovet became famous for its pocket watches manufactured for the Chinese market in the 19th century and is still a leader in complicated timepieces. 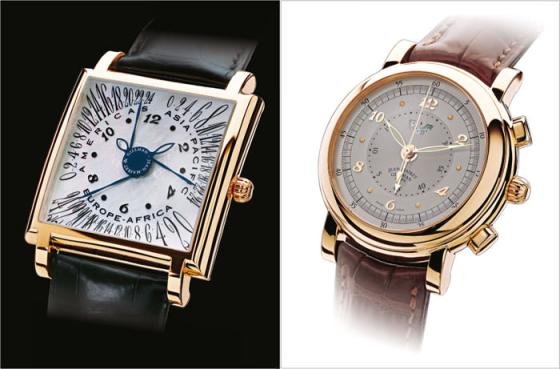 The history continues today
Over a century later, the Jean-Mairet & Gillman brand continues the ‘family business’, combining classic and modern in a unique way. The product line is designed for the connoisseur who loves watches, as each collection is produced in limited series, making them both utterly desirable and highly collectable.

The collections
There are six distinct product lines: Clement Gillman, Hora Mundi, Chronograph Alexandre, Grande Date, Continentes, Lady Fiona.
The line is very broad, showing all the sides of Jean-Mairet & Gillman. The Grande Date, for example, is a very classical and elegant watch, in a traditional, 41mm round case; while the Hora Mundi is a very functional watch, making multiple timezone travel much easier; and the Continentes takes this one step further, showing three retrograde timezones on one skeletonized dial. Add to this Jean-Mairet & Gillman’s ladies line, the Lady Fiona (named after Jean-Mairet’s daughter) and you have a very complete, yet still exclusive line.