Maurice Lacroix made a lot of brands jealous last year by being the first to incorporate the invention of Michel Vermot, who, with the collaboration of the Haute Ecole ARC in Le Locle, had developed the first square gears. (Since then, Michel Vermot has been appointed as the head of the department for movement development at Maurice Lacroix.) This mechanical ‘curiosity’—for lack of a better word—is quite impressive when you see it turning in a square manner.
Utilizing this purely visual fascination (functionally, the square gear brings no kinetic improvement to the table), Maurice Lacroix is introducing a second model this year called the Masterpiece Roue Carrée Seconde. As its name indicates, this model uses the square gear, engaged by a gear with three orbits in the form of a cloverleaf to indicate the seconds. This square rotates continuously, thus providing a rather fascinating animation on the dial. It is interesting to observe how the irregular teeth mesh with those of the cloverleaf, which drives it. (This square gear was realized using LIGA technology, which, when combining photolithography and electroforming, offers more precise forms than those obtained with traditional machining.)
The design of the piece, which necessarily highlights the kinetic performance of the square gear, features a black or rhodium-plated ‘Large Snail’ pattern on the dial. Two simple hands and a classic display for the power reserve complete this picture, with its simple 43-mm round case in polished and brushed steel. 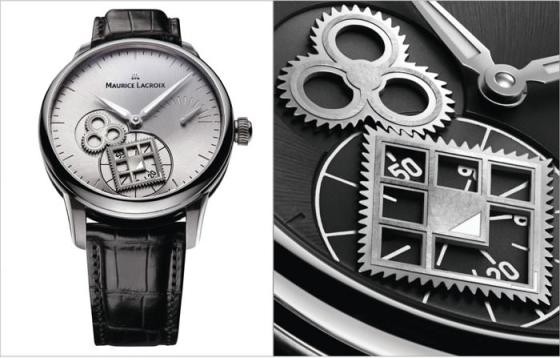 In-house automatic movement
Another development of note at Maurice Lacroix is the introduction of new large in-house automatic movements: both 16 ½ line calibres, the ML 190 offers a retrograde date and the ML 191 offers a double retrograde. These two movements equip the Masterpiece Calendrier Rétrograde and the Masterpiece Double Rétrograde, respectively.

Here again, the design emphasizes the indications in the simplest and most direct manner possible, thus offering a look of harmony and purity. In the Masterpiece Calendrier Rétrograde collection, the dial is divided into three different zones: The retrograde date indicator using a hand on the left side; a power reserve display with decreasing markers that visually shows the state of the watch’s winding, placed between 1 o’clock and 3 o’clock; and an imposing small seconds hand at 6 o’clock.
On the Masterpiece Double Rétrograde, the functions are divided in a more symmetrical manner with the retrograde date at 6 o’clock, surmounted by a GMT display at 12 o’clock. The power reserve indicator is at 3 o’clock and a small seconds display is at 9 o’clock.
Two versions of these new Masterpiece watches are available: a 46-mm case in 18-carat pink gold, limited to 50 pieces; and a 43-mm steel case in non-limited quantities. 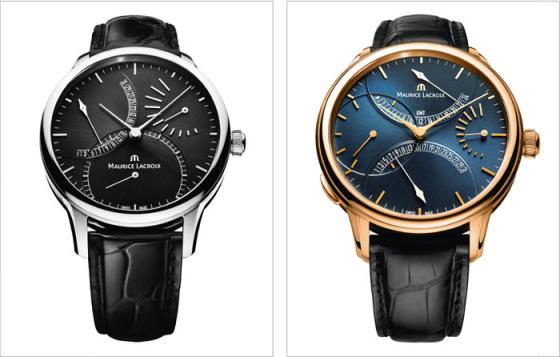