Ventura is back — and alive, thank you!


Ventura is back — and alive, thank you!

It is difficult to be a pioneer. It is even more difficult perhaps to remain one. This is because, when you are ‘right’ before everyone else, or quite simply put, when you propose a new way of doing things, a different way of doing things, but no one really gets it, you need to move mountains to clear the field of view for what people have not been able to see.
Pierre Nobs is the kind of guy who likes to move mountains. He was this way already, more than 20 years ago, in 1989, when he founded Ventura. He was determined to move a stubborn watch industry into the arena of technical modernity and design. But, at the time, watchmakers viewed this new approach with a rather condescending eye. Then, undoubtedly intrigued by the more than 20 international design prizes garnered by Ventura, they began to take another look. They told themselves that there was indeed something interesting going on there, both technically and aesthetically, that deserved a closer look. Some groups even had the desire to purchase Ventura, believing that, after all, making Ventura their technical research laboratory could very well prove to be an attractive proposition.
But Pierre Nobs, with his own ideas and his particular character, was not inclined to let his brand be swallowed up so easily. The brand’s development was also closely linked to personal ties that he had formed with a few well-known designers in the domain of industrial design. Ventura’s adventure was therefore not easily ‘dissociable’ from that of a true ‘industrial artist’, who wanted to construct a remarkably coherent collection. In this venture, he placed his bets on the potential of LCD displays, coupled with the first SPARC® Automatic Digital watch in 2000, using an automatic mechanical movement as the energy source.
You might remember the earlier battle between Seiko and the Swatch Group regarding the ‘hybrid’ movement. Switzerland ended up somewhat abandoning this technology while Seiko continued its research, finally presenting the Kinetic, followed by another mix of mechanical, electrical and electromagnetic energy in the Spring Drive.
In 2003, Ventura presented its patented EasyScroll® system, a roller driven by a chip that allowed the user to intuitively select the various digital functions on the dial’s LCD display. Alas, the brand then entered turbulent times. Knocked about by various shareholders having difficulties introducing a common and coherent development strategy, Ventura ended up on the auction block on several occasions. It was a long saga, which we will not go into here, but which ended well. In 2009, Pierre Nobs, with new associates, again took control of Ventura. Interestingly, the brand had never stopped delivering product and assuring its after-sales service.

Intuitive digital functions
Pierre Nobs is inaugurating Ventura’s new beginning with the launch of an entirely new SPARC MGS Digital Automatic Watch, equipped with a whole new system in which a mechanical system produces the electricity. He calls it the MGS system.
So, in a few words, how does the MGS system work? The wearer’s wrist movements cause the oscillating weight—visible in the upper part of the watch—to turn 4,000 times per day, according to Ventura’s calculations. The oscillating weight transmits the energy through a gear train to a barrel. This barrel is quite unusual in its composition because its spring wraps around a central column of a double gear. When tensioned fully, the barrel spring then releases its energy to a micro-generator, which happens about 17,000 times per day, thus transforming the mechanical movement into electrical energy. The micro-generator then sends its electrical spark (the ‘SPARC’) to an accumulator, which stores the electrical energy and powers the Cal. VEN_10 movement.
The exclusive Cal. VEN_10 quartz movement is equipped with an LCD screen and has a small additional module (also detachable from the calibre itself) that drives the EasyScroll® system.
The notched roller, judiciously placed at an angle to the two inclined faces of the watch, allows the wearer to intuitively select, by turning the roller with his fingers and scrolling through the various steps and functions of the ‘menu’: hours, minutes, seconds, perpetual calendar with date, month, year, dual time zone indication, alarm, countdown function and chronograph. By moving the roller laterally, the display is changed, the time zones are inversed, and the alarm, countdown, and chronograph are activated.

1. MGS® - The owner’s wrist movements cause an oscillating mass to turn approximately 4,000 times per day on average.
2. Gear Train – The oscillating force is transferred to a precision gear with an attached barillet.
3. Accumulator – The accumulator stores the electric energy and powers the Cal. VEN_10 movement.
4. Barillet – The gear train tensions the spring of a barillet about 17,000 times per day; each time the spring is fully tensioned, it releases its force to a micro-generator.
5. Micro-Generator – The micro-generator transforms mechanical momentum into electric energy and sends a spark (SPARC®) to an accumulator.
6. Cal. VEN_10 – Ventura’s exclusive calibre with its EasySkroll® operating and scrolling system is entirely operated by the wrist-movements of its owner.

The ‘Kink’
This new SPARC MGS Digital Automatic Watch, the flagship of Ventura’s re-launch evokes all the brand’s original design codes created by Hannes Wettstein (after his passing in 2008 at the age of 50, his work has been continued by the Studio Hannes Wettstein, which he created in 1991). These codes include what Pierre Nobs calls the “The Wettstein Kink”, which is the angle, or the characteristic bend, of the watch with its two ‘wings’ that enclose the wrist.
Viewed with suspicion in its time, this bend is a perfect illustration of the rigorous design approach of Pierre Nobs. Before being a sign of avant-garde aesthetics, this ‘Kink’ had a precise function: protect the roller, facilitate the use of the watch, and add to the wearer’s comfort. Although people have so abused the formula ‘form follows function’ that we hesitate to employ it here, this is actually the best definition of Ventura’s specific approach to watchmaking.
And others do believe in the brand, such as the German industrial giant, Braun, famous for its electric razors, among other products, which has just entrusted Ventura with the design of an entirely new line of ‘design’ timepieces. Intended for the mass market, these watches will sell for around CHF 400.
This is definitely not the case with the SPARC MGS Digital Automatic Watch, encased and finished according to the standards of haut de gamme watchmaking: A case in Durinox® hardened steel, a strap in Durinox® or rubber with fold-over clasps, sapphire crystals, tungsten oscillating weight, versions in black PVD, water-resistance to 30 metres and a power reserve of around 45 hours for up to five years in the manual switch-off position. The price tag for this innovative watch: CHF 4,500.
Ventura is back. Long live Ventura. 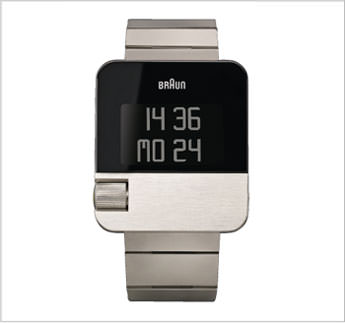