MGI/Movado Group Inc. - The architectural birth of a group


MGI/Movado Group Inc. - The architectural birth of a group

When architecture is the messageTwo big Parisian brands, Hermès and Chanel, who have both acquired a horological legitimacy with completely different styles, are counting on their “pavilions” to convey their message, as is the Movado Group, which brings together its flagship brands under the same new roof.

Movado ... Ebel ... Concord. Three brands with very different images but who are part of the same group, MGI, or Movado Group Inc. The profound changes at BaselWorld were an opportunity for the group to assert itself by bringing its three flagship brands together under the same roof.

A competition was launched, which was won by Brandstorm, a Geneva-based company that celebrates its tenth anniversary this year (see box).

But how to translate in architectural terms the Movado Group’s desire to assert itself loud and clear as a big watchmaking group? This was the main question that the architects invited to take part in the competition launched by MGI had to answer.

Rather than simply trying to unify visually the three different entities, for example by grouping together three different buildings, as its competitors did, Brandstorm did the opposite by inserting the three brands within a single, imposing and powerful stand, thus reinforcing the notion of group over and above that of the different brands. A strategic decision! 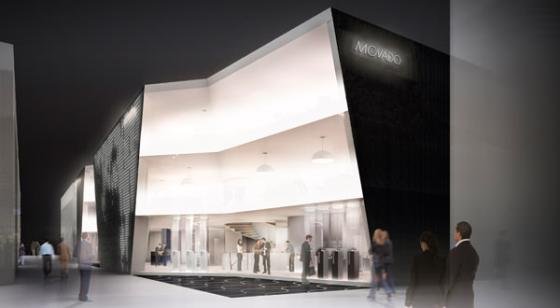 The resulting architectural concept looks like “a watch case protecting the group’s most important brands and a showcase for its watchmaking know-how.” But as we know, there are many different ways to construct a “watch case”.

Like any good architect, Brandstorm started with a detailed analysis of the urban environment, looking at the “lay of the land” inside BaselWorld and paying close attention to the visitor flows inside the halls. This prior analysis was instrumental in the very idea behind the shape for the “case”.

Brandstorm imagined a solid, giant black monolith, but with a large transparent opening—with double bevels running around the entire opening—at its most important strategic corner, the point where visitor flows come from two perpendicular directions. On a second parallel alley, where there is less footfall, another bevelled opening has been created, also running around the entire opening.

These large bevels are totally transparent and give the visitor a spectacular view of the three floors of the monolith and life inside, as if two geometric shapes had been cut out of the opaque building. But besides offering this transparency, these pyramidal opening also soften the solid aspect of the 9 metre high, 37 metre long and 17 metre deep stand, which offers 2,700 m2 of space.

On the main façade, Brandstorm has set up an imposing wall of LEDs, hidden under a moiré fabric. The group can use this to display moving logos, watches and changing geometric shapes, or even create a genuine interaction with passers-by by reproducing their moving silhouettes on the screen.

Inside, there is no abrupt separation between the brands. Instead, you flow seamlessly from one to the other. The reception area is separated by semi-transparent screens from the working areas, which are grouped around a central staircase.

Bandstorm, brand architectSet up ten years ago by Raphaël Henry, Brandstorm, based in Geneva, is a full-service architect that offers brands a “complete 3D vision” that includes the stand, store design, furniture, lighting, display corners, showcases and even packaging. This ability to offer a complete and coherent vision to a brand, coupled with its renowned professionalism and undisputed creativity, have made the young enterprise of fifteen professionals highly successful.

The proof of this success is that Brandstorm has built over 5,000m2 for 11 different brands at BaselWorld this year. Among them is the new stand for Zenith, which is also very impressive, but also the interesting vintage pavilion for the new brand Shinola (see Keith Strandberg’s article in this issue), as well as the stands for Ferrari and Tommy Hilfiger.

“We are not here to impose our own style,” explains Raphaël Henry, “but to make the strategic aspirations of the brands a reality. We never seek to break with convention (unless the brand’s strategy requires it) but instead to help the visual message of our partners evolve”.

When architecture is the messageHermès in fluid curvesChanel, a monolith in black and whiteMGI/Movado Group Inc. - The architectural birth of a group