WHEN WATCHES COME FROM THE COLD

The seismically active country of Iceland is barely one and a half times the size of the city of Geneva in terms of population, yet the island on the fringes of the Arctic circle proudly harbours its own watchmaking brand. JS Watch Co. is just one of around 30 different watch brands dotted around Scandinavia, covering a variety of segments from design to tradition and right up to fine mechanical watchmaking.

After the financial crisis in 2009, the Scandinavian countries all returned to growth last year and are forecast to continue growing above the average of the depressed euro zone through 2013 and into 2014. So the prognosis for the region’s economy is good, even if this region does not necessarily represent the main catchment area for the watch brands’ customers.

As we move to the eastern fringes of Scandinavia we pick up an entirely different watchmaking vibe in Finland. The minimalist designs and fine mechanics disappear in favour of ruggedly functional, digital timepieces designed for outdoor pursuits—often for use in extreme environments.

The Finnish town of Vantaa is home to Suunto—a company that could be used as a textbook example of how to adapt to evolving technology. Suunto was founded in 1936 by Finnish orienteer Tuomas Vohlonen, the inventor of the liquid-filled field compass. Having established a leading position in the manufacture of field compasses and marine compasses, Suunto branched out into diving compasses. With the advent of mainstream electronics, the company started producing dive computers and later electronic compasses. Today Suunto produces “wrist computers” that offer a variety of functions, with dive computers being one of its specialities.

The brand’s latest model is the world’s first wristwatch-sized rebreather compatible dive computer, the DX (pronounced “D ten”). Forget about simply turning a bezel to time your ascent from a deep dive to avoid compression: Suunto has developed its own trademarked algorithm that manages the risks of decompression sickness and provides for a slow, continuous ascent from depth, allowing for a shorter total decompression time. A new wireless transmitter developed by Suunto can even transmit the tank pressure and remaining air time to the diver’s wrist computer. For those who prefer more land-based pursuits, the brand has also introduced new-look versions of its Elementum Terra premium sports watch with casual silicon rubber and leather straps.

There is, of course, an exception that proves every rule and in Finland’s case it is Stepan Sarpaneva, the Helsinki-based watchmaker who produces around 50 timepieces per year starting at €6,500, which he mostly sells directly to end customers. Although Sarpaneva told Europa Star “I have been working like I have worked for the last five years,” he did admit to an increase in interest for his brand after his recent collaboration with MB&F on the Moon Machine piece. “Of course a collaboration with MB&F was a boost for the knowledge of my work,” he says. “I received more emails, a lot more….” 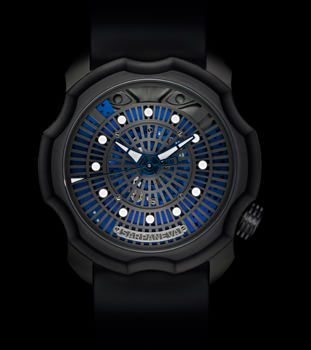 The moon is a theme that is inherent in Sarpaneva’s watches because “it gives a bit of poetry to the very technical instrument”. In the latest Sarpaneva model, the Korona K0 Wuoksi, the moon phase display, featuring the distinctive oversized smiling moon, replaces the rotating bezel of this diver’s watch. This signature moon will also form an integral part of a new “moon” watch that the Finnish watchmaker will be presenting in Basel.

As you can see, there is a huge variety of watchmaking brands spread right across Scandinavia, from fashion watches to high-end timepieces, from design to high-tech and from niche to mass market.