With a split-seconds chronograph, a perpetual calendar, a moon-phase display, and a power-reserve indicator, the 1815 RATTRAPANTE PERPETUAL CALENDAR unites more horological complications than the clearly organised dial suggests at first sight. The technical challenge involved in this complication is to ever more accurately approximate the lunar month of 29 days, 12 hours, 44 minutes, and 3 seconds. With a moon-phase display that needs to be corrected by merely one day every 122.6 years, A. Lange & Söhne has attained a highly realistic degree of accuracy. 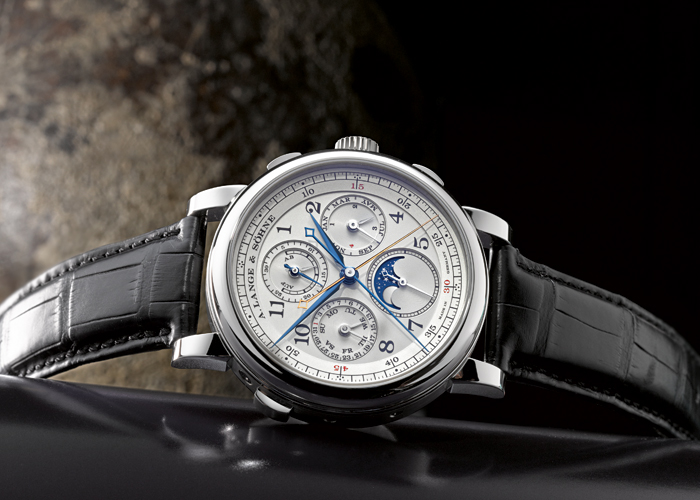 HYT is pushing the limits of hydro mechanics yet further with the H2. The guiding principle behind this new concept? To further integrate fluidics into mechanical watchmaking. Firstly, by the position of the bellows, positioned at 6 o’clock in “V” and rising, which clearly evokes the most outstanding achievements of automotive and aeronautical engineering. This optimises the integration of the interface that connects the watch mechanisms with the fluidic system. Mirroring the pair of bellows, the balance spring presides at midday on its black bridge, the dome marking the rhythm of life in this unique world. At 3 o’clock, a “H-N-R” crown position indicator, which brings to mind the gearstick of a racing car, is counterbalanced by the presence of another hand, which is also original and exclusive to HYT, a temperature indicator. Once the watch is being worn, this function enables the user to accurately find out when the fluid has reached the optimum temperature range. In the centre, a minute hand, designed in stages to fit the structure of the fluidic system, jumps after 30 minutes to avoid the bellows. 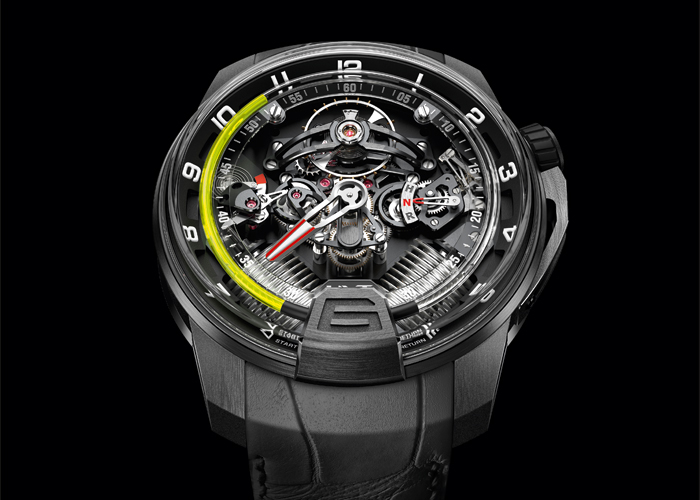 A full member of independent watchmaking’s elite – the AHCI, Marc Jenni presents this remarkable timepiece, featuring a crownless and unfettered sandblasted 316L stainless steel case. The gentle rotation of the Prologue’s signature turning ring, as it revolves around the case, transforms the otherwise jerky task of winding, date or time adjustment into a natural and fluid operation. With each push on the Prologue’s unique mode selector, the W.D.T. pointer moves around one position in its sunrise inspired subdial to indicate the desired function setting. 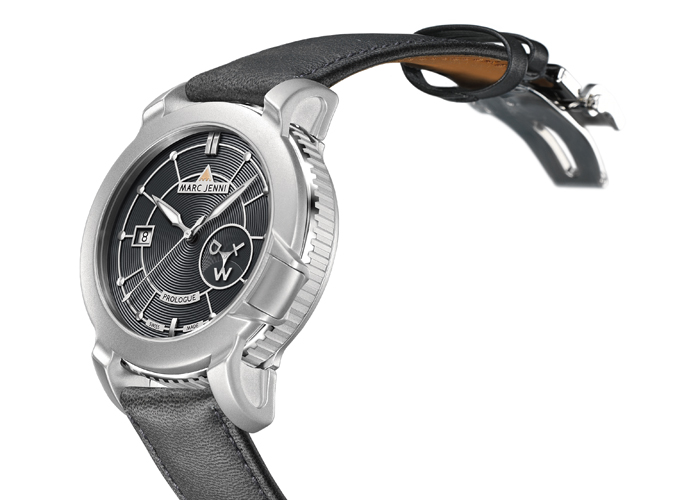 For the new brand Spero Lucem, Geneva is its very reason for being, its point of reference and its home. Everything about it is inspired by the city, including its own name taken from Geneva’s famous motto “Post Tenebras Lux” which appears on its municipal coat-of-arms, which in full should read “Post Tenebras Spero Lucem”: “After calamity, I aspire to happiness”.

A world first by Spero Lucem: LA CLEMENCE, a Tourbillon minute-repeater with crazy hand La Clémence is the name given to Spero Lucem’s new 2013 model. Giving such a name to an intriguing minute-repeater with a traditional gong is a fitting tribute to the city from which the brand draws its identity. Yvan Arpa chose to name this gong Saint Pierre (St. Peter) to honour his friend Pierre-Laurent Favre, who developed the movement, as well as in reference to Geneva’s famous cathedral. This watch also accommodates a one-minute tourbillon and a third complication that has never been seen before: when the repeater starts striking, the hands go completely crazy. This playful world première is filled with meaning: since the purpose of the minute-repeater’s complex mechanism is to indicate the time by sound, it makes sense to do everything possible so that the user can concentrate on the sound without being tempted to use his eyes to confirm what is heard. But after the magic of sound the miracle of sight suddenly reclaims its rights: a mechanical memory brings the hands of La Clémence to their proper places, in step with time. The tourbillon cage is inspired by the head of the pastoral key appearing on the Geneva coat-of-arms. The sunburst snailed engraving on the dial echoes the feathers of the imperial eagle’s wing. On the back of La Clémence, the eagle’s crown forms the bridge of the centrifugal governor. 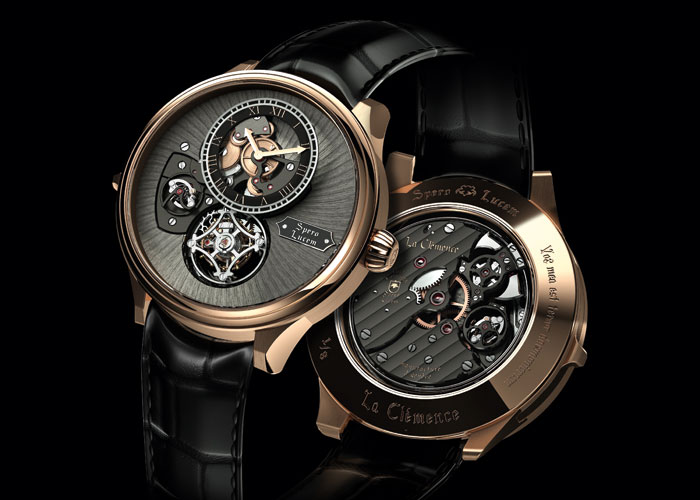 SEQUENTIAL ONE – S110 by MCT offers a new interpretation of the design that houses the multi-layer hand-wound movement developed by MCT. Exposed prism blocks, modified transparent bridges and arrows reveal the depth of the watch, while a smoother minute disc brings further clarity and emphasises the harmony of the passing of time. Revised numerals for the jumping hours and the minute disc also create a modern look. 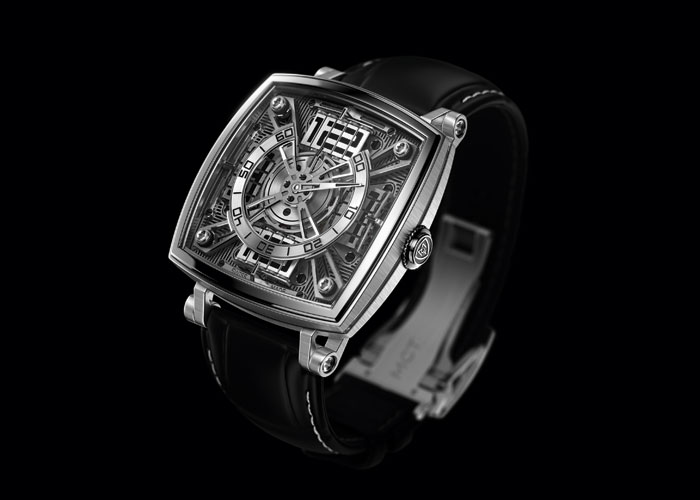 MOON ORBITER by Romain Jerome, a flying tourbillon featuring a unique three-dimensional architecture. Equipped with a Manufacture movement, the Moon Orbiter, with its generous 49 mm wide, 45 mm long and 20 mm thick dimensions, has a bezel-free case combining watchmaking steel with elements from Apollo 11, composed of an exclusive system of lugs mounted on pneumatic cylinders to ensure both wearer comfort and the smooth fit of the black alligator leather strap with pin buckle-fastening. The hours and minutes are read off on an off-centred 3 o’clock counter on the right-hand side of the dial. The openworked hands are red-lacquered, while the 42-hour power reserve is displayed by a lacquered red cursor appearing on a separate subdial between the lugs at 6 o’clock. Everything is designed to highlight the flying tourbillon enthroned at 9 o’clock, on the left-hand side of the dial on which moon dust has been incorporated. 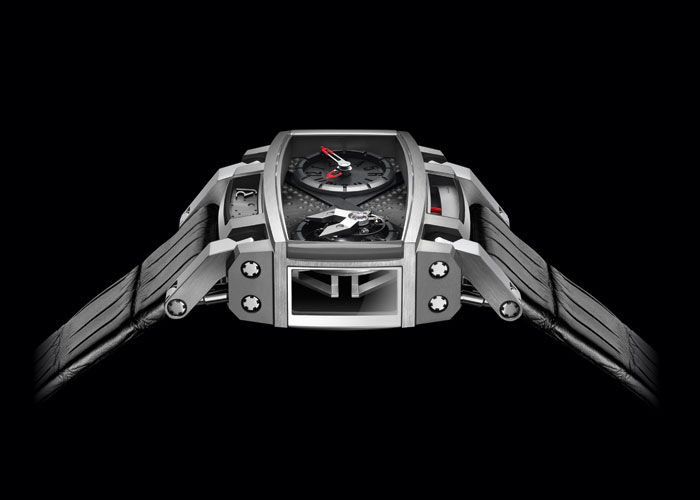