Some 27 years ago, at the end of 1986, Pascal Vaucher, a young gem-setter, had what he calls a “vision”. But there was nothing mystical about this vision, despite the fact that the Beatles song “Lucy in the sky with diamonds” was perhaps playing in his head. On the contrary, it was a most pragmatic “vision” during which he saw all the possibilities that were offered by streamlining gem-setting in the watchmaking business. 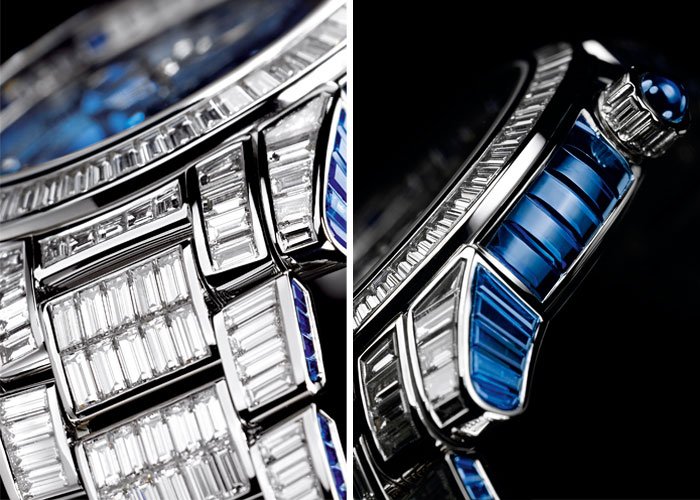 Until then the gem-setter drilled each hole individually, adjusted the stone then folded the metal back to hold it in place. By streamlining this work, in other words by preparing the jewel holes systematically beforehand and calibrating the lots of stones, gem-setting could move from being an entirely artisanal activity to a semi-industrialised process. This streamlining would “democratise” gem-set products, in particular making gem-setting on steel possible, profitable and affordable. What at first seemed heretical has since become a major trend and we have lost count of the number of brands, including the most prestigious, who have followed it.

What seemed heretical has since become a major trend.

This first idea of streamlining gem-setting was the trigger that allowed Pascal Vaucher to work as a pioneer and build up a powerful structure that is now grouped under the generic name of Ateliers Pascal Vincent Vaucher, whose slogan eloquently summarises its approach: “Art and method”. Under this “Ateliers” name, the Pascal Vaucher holding groups together a number of complementary businesses that can offer customers a fully integrated service, from sourcing the stones and preparing them up to delivery of the finished product, via design and production of the case and all the different types of gem-setting. 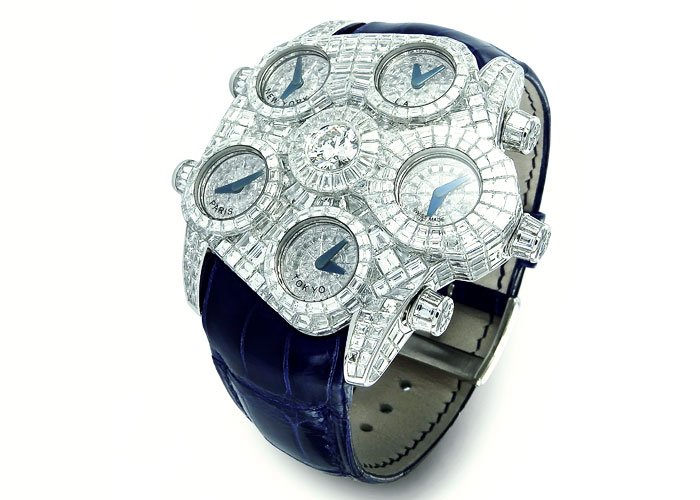 The six different business units, which are housed under the same roof in the watchmaking suburbs of Geneva, are Swiss Made Settings SA, which brings together jewellers and gem-setters, Swiss Clarity & Cut SA, which supplies the precious stones for watchmaking, Les Emboîteurs d’Espace SA, which designs and produces the exceptional watch cases, Pascal Vincent Vaucher SA, responsible for the traditional watchmaking gem-settings and Tempora SA, which is responsible for the administrative, financial and logistical services, in other words the back office functions for the other units. To this remarkably coherent set-up we must also add SetGemFree LDA, a gem-setting operation in Portugal that is 51 per cent owned by Pascal Vaucher and Beroma SA, which also does watchmaking conceptions and implementations.

This constellation-like structure (or facetted, to take the diamond metaphor), which has been built up over years of continuous development, is closely linked to one of the tenets of Pascal Vaucher, who likes to talk about his management style. It is a very horizontal management style in which the hierarchies are flat, based on competencies and professions that are divided into highly autonomous sectors with precisely defined responsibilities. He describes himself as an “integrator” between these different autonomous platforms and managers, just like his “Ateliers”, which can offer customers their distinct services individually or join forces to offer a fully integrated service.

This management style is based above all on a person’s individual skills rather than their position in the hierarchy. Pascal Vaucher is convinced that “not being dependent on a higher authority gives everybody a heightened sense of responsibility and autonomy”, which better opens up avenues of research, collaboration and innovation. Along the same lines, a transparent and equitable profit-sharing scheme has been set up. Each month, the figures are presented department by department at an information meeting that is open to all. If there is a profit, a bonus that is in proportion to the figures but identical for everyone, regardless of their salary level, is paid every three months to each employee. In this way, everyone is directly implicated in the highs and lows of business.

A TOUR OF THE WORKSHOPS

But what are the competencies and perimeters of these different workshops exactly?

Nestled at the end of one of the numerous corridors in the hive of activity on several floors that make up the “Ateliers”, Swiss Clarity & Cut has a place apart. Precious stones, white, black and cognac diamonds, jade and decorative stones are shown in display cases or wait their turn in the stock. Here we are at the heart of the stone trading and buying. But the stones are also cut here for some of the more audacious projects or for retouches on, for example, baguette diamonds. Unlike other precious stone trading offices, the criteria of Swiss Clarity & Cut are strictly horological in nature. Based on the setting plans submitted by the other workshops, this office supplies the required stones, round or shaped, to the strict tolerances required. Precious stones for use in watchmaking must be of a specific size whose regularity is essential. The office is very active on the markets, with a huge network of partners, in Asia and elsewhere, and only purchases stones of the highest quality, “without concessions but at a good price”. This office also monitors the markets intensively so that it can also make proposals and suggestions in terms of colours and the choice of particular stones (they are currently working on a big project that we cannot talk about, but which is likely to make waves in the world of gem-setting). 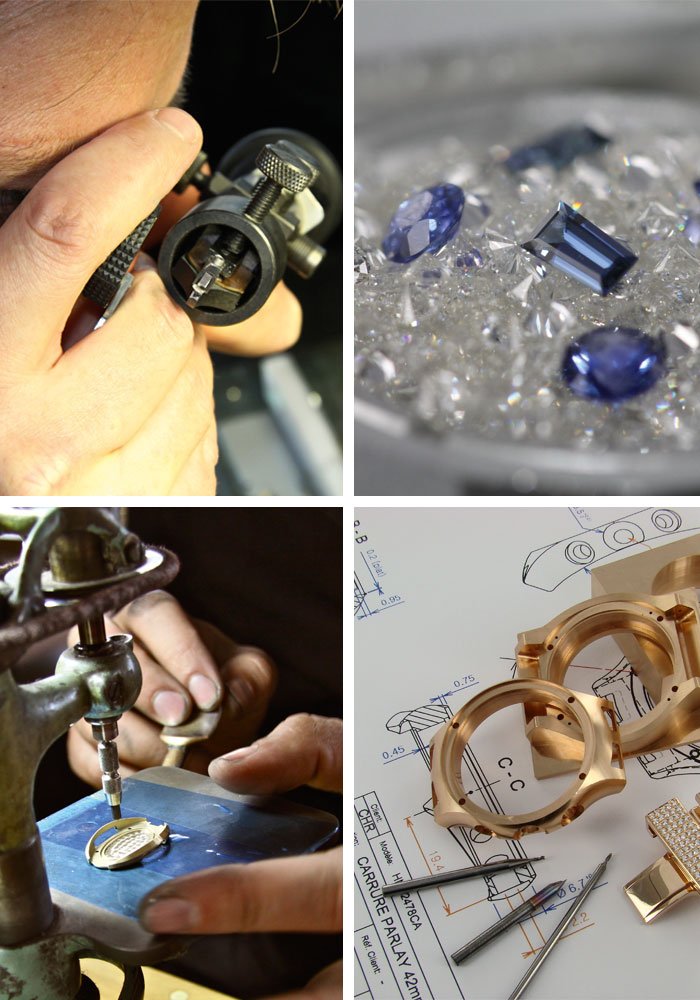 Leaving this haven of treasures, we move on to Les Emboîteurs d’Espace. This unit deals with everything to do with the case, in particular precious metals and high added value pieces. The computer-aided design and construction processes here focus mainly on the creation of case elements (some of which are among the most complex), bezels, (the most common component to be set with precious stones), base plates for dials to be fully paved or set with stones, oscillating masses and buckles. The workshop can even design specific cases from scratch, from a unique piece to a small series of 100, such as the highly complex case of the incredible Grand watch by Jacob & Co., which consists of multiple elements, each encased in each other (see the photo). This case required more than 60 hours of machine programming alone. The machines, indeed. They are just next-door in the mechanics workshop where 15 people work in production. Compared with the machines one usually sees in watch factories, what strikes us here is the extreme diversity, from the gigantic CNC machine that can work “on the six sides of a cube” to the most modest tower. The size and variety of this machine park highlights the quest for diversity that prevails at Les Emboîteurs d’Espace. Highly specialised tasks, as well as the ability to machine in any possible configuration from a bar or flat piece of metal means that the workshop can offer a case-making service that can meet any requirement. This is also where the essential work of mechanically preparing components for their setting is carried out. The polishing and testing stations are also found in this workshop.

The gem-setting itself is the responsibility of the Atelier Pascal Vincent Vaucher. This is the very heart of the profession. This workshop deals with no less than five million stones per year, or between 300,000 and 400,000 per month. Once they have been received, checked and classified to 2/1000ths the stones are passed on either for entirely manual or mechanical setting. 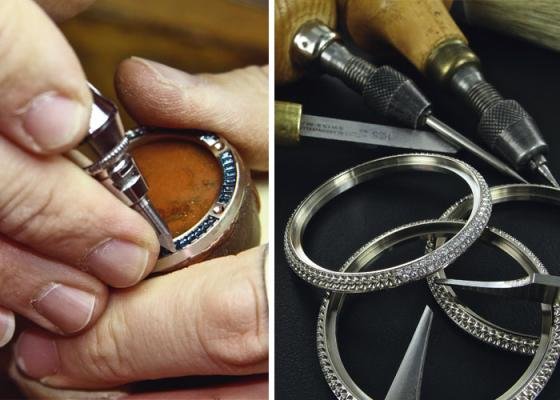 It is this highly streamlined form of gem-setting, started 27 years ago, that has made such a big contribution to pushing the boundaries of gem-setting beyond that of exceptional pieces alone. When the components to be set arrive here, they have been mechanically prepared and they arrive with their setting sheet. On this plan, the different hole sizes to be set are indicated by different colours. Each of these colours corresponds to a small box that contains the stones that have been sorted and checked. The setting is then just a question of assembly – but assembly that requires a skilled hand, since the gem-setter has to place the stone in the pre-machined hole (sometimes having to adjust the CNC work by hand) before refolding the material to hold the stone. 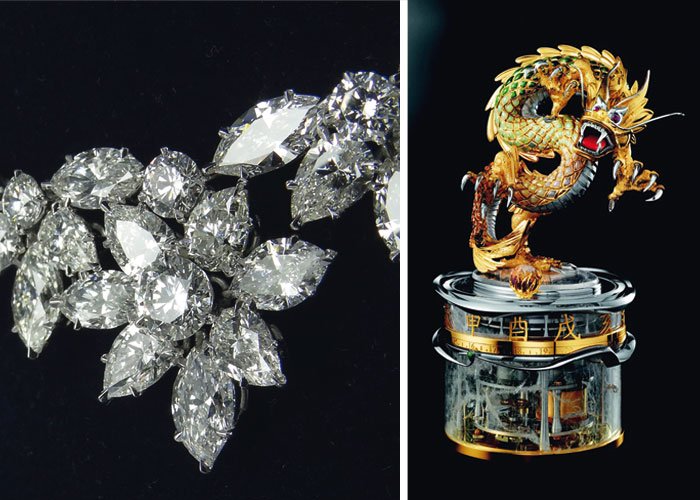 Left: Pascal Vincent Vaucher, Swiss Made Settings - Right: The Dragon and the Pearl of Wisdom Automaton, Parmigiani
Each of the 585 scales of the Dragon’s body, made of natural jade (green, white, yellow and red jades), are designed, cut and then set one by one in the precise form required. The claws and whiskers are made of solid white gold, the eyes from rubies and the tongue from carnelian. The pearl of wisdom is a solid white gold sphere set in a cameo of precious stones including white diamond, ruby and orange and yellow sapphires. The base is cut from a block of rock crystal. It took more than 5,800 hours of work and the involvement of the most prestigious artisan craftsmen, from the sculptor to the goldsmith, the gemmologist to the gem-cutter, the jeweller to the setter, the visualiser to the designer to the clockmaker.

Activity here can range from setting simple round diamonds to high-end gem-setting, which can be partially mechanised or entirely manual. But right next-door there is another unit, Swiss Made Settings, that does ultra high-end jewellery pieces. Here, the work is done by file, cutting to fit the stones to be set. The rhythm is by no means the same. Asked about a piece laden with baguette diamonds of all sizes, the setter admits that he sets one or two, or in the best possible case three or four, stones per hour!

Beroma, which the Ateliers Pascal Vincent Vaucher recently took control of, is specialised in production management and focused on the finished product. It specialises in technical designs, management of production, management of external stocks and assistance with setting up production for new brands. These competencies are perfectly complementary to the various offers of the “Ateliers” and allow them to offer even better integration of production and product management operations. Not forgetting Portugal-based SetGemFree LDA, 51 per cent owned by the “Ateliers”, which allows the group to diversify its gem-setting operations even further.

Without method, there is no art, we could say.