Staying faithful to the philosophy of the firm’s founder Georges Ducommun, DOXA has produced innovative watches of superlative quality at a reasonable price for over a century. And the Swiss watch company is committed to this principle in future too. Today, DOXA offers its customers collections that fulfil virtually every demand. Classical and sporty timekeepers, jewellery and fashion watches – from mechanical movements to quartz technology – all are in the current DOXA range. 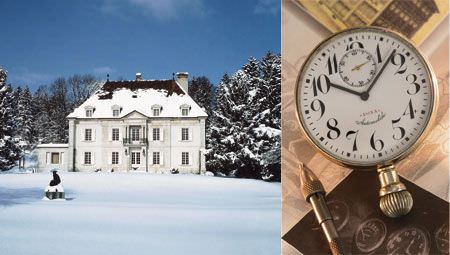 At the beginning of the 20th century, Georges Ducommun acquired Château des Monts – today a watch museum – in Le Locle.


“DOXA has helped to shape Swiss watch history for over a hundred years”, says Romeo F. Jenny, President of the independent family business based in Biel-Bienne. “The combination of this tradition with innovations is the big challenge that we have always taken on.” The first watch with 8-day movement, the round wristwatch with date pointer or the classic divers watch SUB 300T are just a few milestones in the DOXA success story. 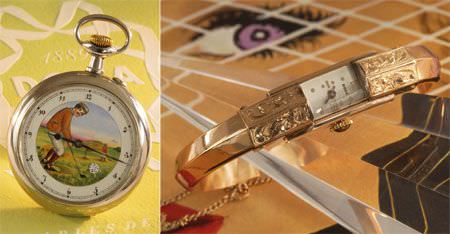 
Historical commitment
The DOXA story goes back to the year 1889. The founder of DOXA, Georges Ducommun (1868 – 1936), was born in Le Locle in the canton of Neuchâtel. He grew up in modest circumstances together with thirteen brothers and sisters, and when he was only twelve began his apprenticeship in a workshop that assembled pocket watches.
When he was twenty, Ducommun opened his own workshop. It was the age of the pocket watch. Within a very short space of time the exceptional quality of his chronometrical creations became known much further afield than the borders of the Swiss Jura region. His work was honoured with prestigious prizes and medals in Liège (Belgium) in 1905 and Milan (Italy) in 1906. With the development of 8-day watches, which Ducommun patented in 1908, began the era of manufacture of timing instruments for ships, cars and aeroplanes. Amongst other applications, DOXA 8-day timepieces were built into the racing cars of the famous automobile manufacturer Bugatti. The actual brand name DOXA was registered as a trademark in 1910.
DOXA successively broadened its range with some of the most beautiful creations to come from the art of watchmaking. Railway and travel watches, pocket watches with and without ringing tones, alarm timepieces – followed by women's and men's wristwatches, jewellery and fashion watches as well as ring watches – all increased DOXA's popularity. A traveller returning from the Orient reported once that numerous customers mistook the brand for the object, in that they believed in good faith that DOXA actually meant 'watch'.


On the pulse of time
The watchmaking spirit of Georges Ducommun lived on after his death in 1936. His son-in-law Jacques Nardin, grandson of Ulysse Nardin – founder of the watch company of the same name – took the DOXA success story even further. The brand constantly grew and expanded on markets all over the world.
In 1944, a round DOXA wristwatch with date pointer came onto the market, followed in the 1950s by mechanical wristwatches with retrograde seconds hand. In 1954, DOXA presented a gold watch to every player and the trainer of the victorious German national football team on their winning the World Cup in Berne (the 'miracle of Berne'). The GRAFIC, introduced in 1956, captivated with its elegant square case in Bauhaus style.

The diver's watch classic
A further milestone in the DOXA story came in the sixties. In 1967, the wristwatch collection was extended with a diver's watch, the DOXA SUB with the unique and then revolutionary orange-coloured dial.
This new model for professional and keen amateur divers was realised in collaboration with one of the USA's largest Scuba diving associations.

Professional diving experience was combined with nearly a hundred years of watchmaking skill. The result was the construction of a technologically outstanding diver's watch with two sensational innovations. The first was a rotatable bezel with integrated no-decompression time limit table. The second was a bright orange-coloured dial that enabled better readability in extreme lighting conditions. 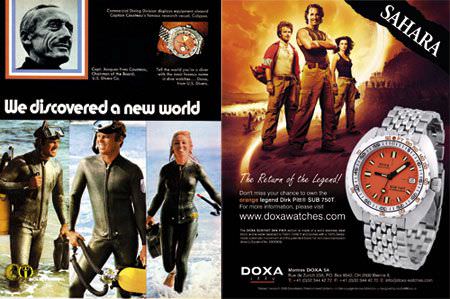 Everyone knows the exciting and impressive underwater films made by the French scientist and adventurer Jacques-Yves Cousteau. He knew and appreciated the advantages of the DOXA SUB (advertisement – US Divers 1970 USA). 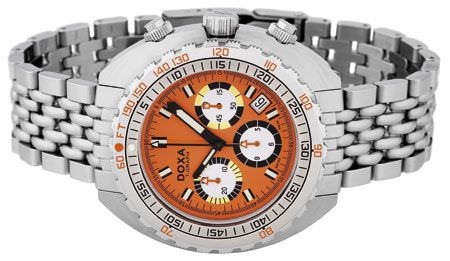 
New edition of the orange-coloured legend
Thirty-five years later, in 2002, the diver's watch classic was newly launched in various limited editions. Based on the same technical characteristics as the original 1967 model, the new edition incorporates the latest technology at the same time as retaining the design of the sixties.
The orange-coloured DOXA owes its popularity not least to Dr. Clive Cussler, master American action adventure author. The hero of his novels, Dirk Pitt, leader of an adventurous group that is specialised in diving for wrecks and other dangerous undertakings, wears his DOXA SUB 300T whenever he's in action. Dr. Clive Cussler's Dirk Pitt novels have been translated into over 40 languages and sold in over 100 countries. He is founder and Chairman of the National Underwater & Marine Agency (NUMA) and has already discovered more than 60 historical shipwrecks with his team. 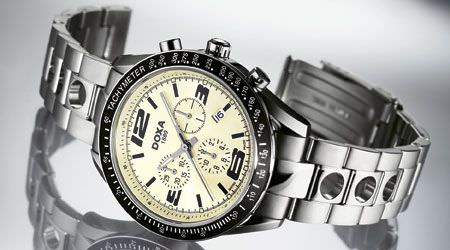 
Legendary Swiss precision
Since 1997, the tradition-rich DOXA brand has been owned by the Jenny family, active in the watch business for four generations. Romeo F. Jenny is head of the company, whose headquarters is in the town of Biel-Bienne at the southern edge of the Jura mountain range.
DOXA relies on its own concepts and blueprints, which are transformed into reality with precision craftsmanship. DOXA watches are distinguished by accuracy, robustness, reliability and durability, even under harsh conditions. The most rigorous of quality controls before a watch leaves the factory guarantee this legendary Swiss precision.
The demand from abroad endorses DOXA's purposeful commitment to the traditional values that have made Swiss watches famous all over the globe. DOXA has notably been a guarantee for quality watches in Eastern Europe for decades. “In the past few years we have also succeeded in building up and consolidating our position in the Middle and Far East,” adds Romeo F. Jenny.

Although DOXA uses sales channels via retailers for the traditional collections, the sporty diver's watches with the trendy dials are exclusively sold via internet. Watch lovers and collectors all over the world can order unique, limited edition watches from the DOXA SUB family directly online.

“We're looking forward to an exciting future,” continues Romeo F. Jenny. “Mergers and takeovers have vastly changed the watch industry over the past few years. As an independent family business we are ready to tackle the resulting challenges.”

The house of DOXA will continue in the future to combine tradition with contemporary dynamism. Just as at the beginning of DOXA's success story, the focus will continue to be on quality, reasonable pricing and innovation. 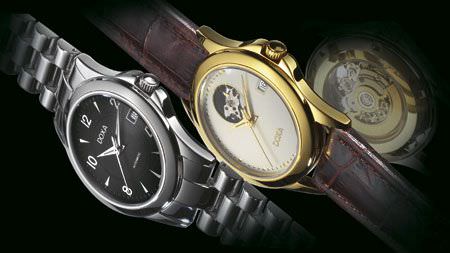 DOXA Tholos
This new creation in the classic DOXA line is equipped with an automatic movement and is available in steel or gold-plated. The latter version has an opening on the dial at 12 o'clock that gives a view of the heart of the watch movement, which is also visible through the transparent case back. Leather strap or steel bracelet, according to version.


DOXA milestones
1889: Foundation of a watch workshop by Georges Ducommun in Le Locle.

1906: DOXA wins the gold medal at the 'Exposition Internationale' in Milan, Italy.

1908: Patenting of the first watch with 8-day movement.

1910: Registration of DOXA as a trademark.

1944: DOXA launches a round wristwatch with date pointer.

1954: DOXA presents a gold watch to every player and the trainer of the German national football team, winners of the World Cup.

1956: DOXA creates a sensation in the watch world with the presentation of the GRAFIC, designed in Bauhaus style.

1967: DOXA presents the SUB 300T diver's watch. The innovations of the first watch (water-resistant to 300 metres/1000 feet) with a no-decompression limit table on the bezel and an orange-coloured dial for optimal readability under water make DOXA a cult brand in the world of diving.

1997: DOXA becomes the property of the Jenny family, active in the watch business for four generations. Romeo F. Jenny takes the chair as President and successfully leads the company into the next millennium.

2004: DOXA presents the DFB (German football association) with 50 watches from the special limited edition '1954 â€“ Mythos Bern', at the international match between Germany and Hungary on 6 July in Kaiserslautern.