If ever a demonstration was needed that good design never dies, look no further than the celebrated Grafic model, designed and made by the discreet, but hardy, Doxa company. It is marking the 50th anniversary of the design’s initial introduction by re-launching it in grand style.
The 2007 Grafic is as fresh, as stylish and as eye-catching as its 1957 predecessor. It features the same all-but-square case, clearly inspired by early 20th-century Bauhaus aesthetics, and the same inimitable dial face, usually crisscrossed by its signature pattern of slim, straight hour-marker lines.
When the Grafic was launched, however, its survival, let alone its market success, were far from a foregone conclusion. 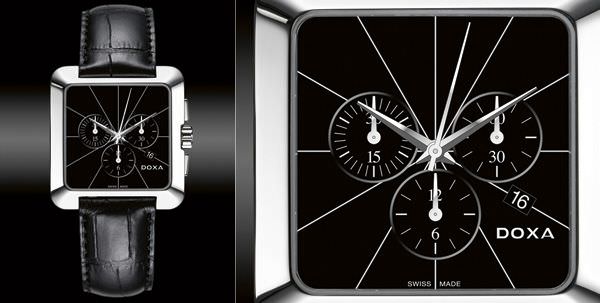 An adventurous direction
In the late 1950s, when the Grafic first came out, watch styles were anything but adventurous. Most watchcases were conservatively round and dials for the most part elaborately decorated. In those days, the mainstream was practically the entire stream. You had to be something of a contrarian to go against the prevailing trends. Doxa was, and still is.
So when Pierre Henry, Doxa’s clear-headed Advertising Manager, suggested that the markets of the period could be convinced of the merits of a square, but non angular, case shape, some eyebrows rose in polite doubt, but the project managed to remain alive.

The watch face : trial and error
The dial proved the real challenge. At first, it was styled in the fashion of the day with a mix of dot markers and Arabic numerals. Since that went nowhere, the other extreme was tried : two intersecting lines forming a simple cross. That proved far ahead of its time. Henry and the Doxa design team finally settled on a design that has survived down to the present day: six slim lines crisscrossing through the dial centre. Aesthetically it worked beautifully then. It still does today.

A signature dial
As if that wasn’t enough, the Doxa people came up with another modest but shrewd idea. Instead of positioning the brand name squarely at the centre of the dial, why not place it in the lower right-hand corner, just like a painter’s signature? That worked wonders too, giving the Grafic dial an extra touch of distinction – one that made a lot of difference in days where originality on the wrist was not easy to find.
When the Grafic reached market in late 1957, consumers reacted as they usually did. In countries where design explored new territory, the Grafic was an instant success, soon making a name for itself in Italy. More conservative markets took longer, of course, but ultimately came around.

New generation - same Grafic.
By 1995, the Grafic had become a legend and original models were hard to find. Interest in the design was still very much alive, with a new generation – and especially new markets – more than willing to acquire so personable a timepiece, one that had quietly become a collectible...
Doxa was more than happy to oblige and in 1995 the Grafic was released once more. Give or take a few details, it closely resembled the original and the entire production soon sold out, to everyone’s satisfaction, not least Doxa’s.

2007 : a second renaissance
This year’s reissue of the graphic deliberately salutes the 50-year-old original with a tried and tested self-winding mechanical movement available alongside the standard quartz movements. A Grafic chronograph has even been issued, adding a technical touch to a design long popular largely on the strength of its unique aesthetics.
All Doxa Grafic timepieces are fitted with a stainless steel or gold plated case and a black, brown or silvered dial face, with or without the Grafic’s signature hour-marker lines, some with date calendar, offering a choice of leather strap or matching metal bracelet.

Doxa, a distinguished history
Founded in 1889 by Georges Ducommun, Doxa S.A. was acquired by the Jenny family, whose watchmaking experience spans four generations. With their in-depth understanding of family company management, Doxa’s new owners are perfectly positioned to guide the company with confidence and competence as the 21st century’s increasingly globalized markets impose a new and agile management style, designed to cater to the world’s ever more varied tastes.