KUKI - A Family Company with an Innovative Tradition


KUKI - A Family Company with an Innovative Tradition 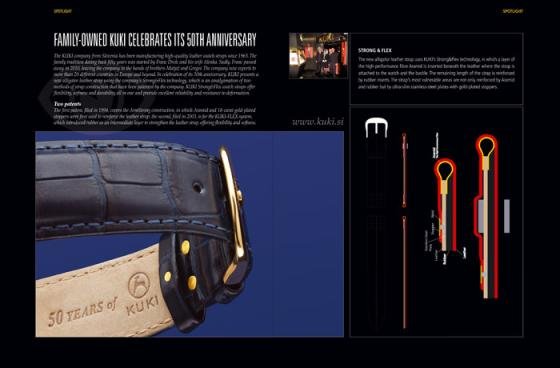 The KUKI company from Slovenia has been manufacturing high-quality leather watch straps since 1963. The family tradition dating back fifty years was started by Franc Drolc and his wife Alenka. Sadly, Franc passed away in 2010, leaving the company in the hands of brothers Matjaž and Gregor. The company now exports to more than 20 different countries in Europe and beyond. In celebration of its 50th anniversary, KUKI presents a new alligator leather strap using the company’s Strong&Flex technology, which is an amalgamation of two methods of strap construction that have been patented by the company. KUKI Strong&Flex watch straps offer flexibility, softness and durability all in one and provide excellent reliability and resistance to deformation.

The first patent, filed in 1994, covers the ArmStrong construction, in which Aramid and 18-carat gold-plated stoppers were first used to reinforce the leather strap; the second, filed in 2003, is for the KUKI-FLEX system, which introduced rubber as an intermediate layer to strengthen the leather strap, offering flexibility and softness. 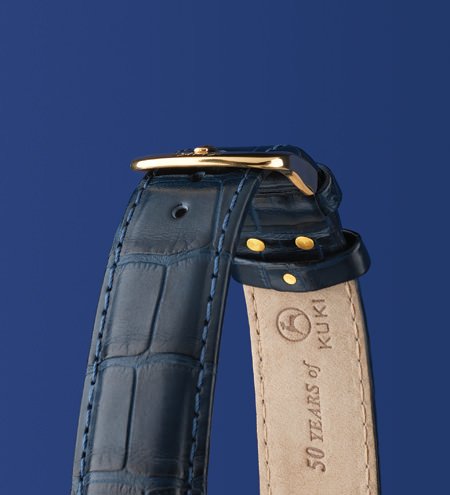 The new alligator leather strap uses KUKI’s Strong&Flex technology, in which a layer of the high-performance fibre Aramid is inserted beneath the leather where the strap is attached to the watch and the buckle. The remaining length of the strap is reinforced by rubber inserts. The strap’s most vulnerable areas are not only reinforced by Aramid and rubber but by ultra-slim stainless-steel plates with gold-plated stoppers.

A FAMILY COMPANY WITH AN INNOVATIVE TRADITION 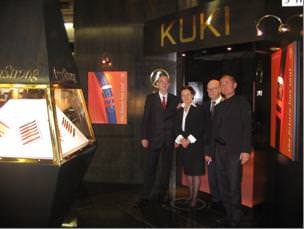 ABOUT THE KUKI COMPANY 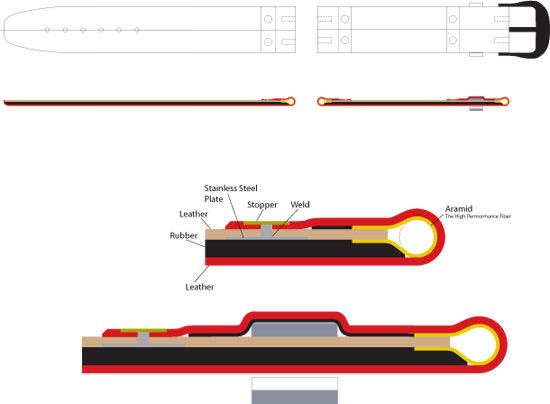 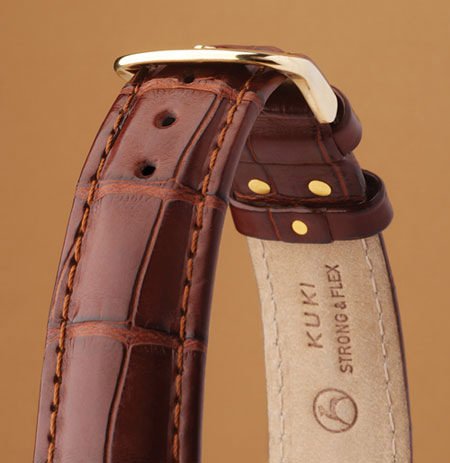 Franc Drolc, founder of the KUKI company, at the age of 77, following a short and serious illness, passed away in 2010. Franc Drolc was able to admire the values of honesty, sincerity and human dignity, which led to the growth of many genuine private and even business friendships. His almost 50-years contribution to the watchmaking world remains ineffaceable.

For several years (now), the KUKI company has been a responsible participant in the creation of trends in the watchmaking world. The KUKI Metallic and the KUKI Patent leather watch straps represented a contribution to KUKI’s striving for excellence in top-quality watch straps. 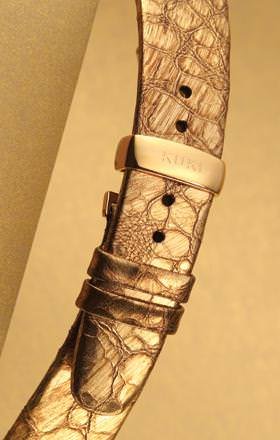 In year 2003, the company launched its second patent under the name of “KUKI-FLEX”. This unique product is tailored to meet the demands of those watch strap consumers seeking such qualities as flexibility, softness and durability. A significant advantage of KUKI-FLEX watch strap is the creation of numerous designs of watch straps made to perfection. The exceptional qualities of the KUKI-FLEX watch strap are the result of its unique, yet simple structure – a layer of rubber inserted between a top and bottom layer of leather. 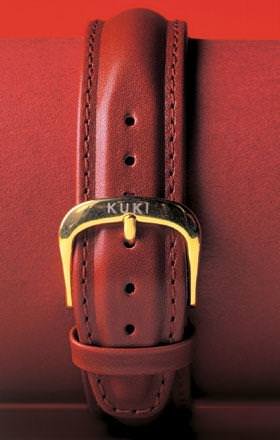 The watch strap comprises three layers: a basic core material made of rubber, a synthetic material that forms the intermediate layer, and leather for the cover and bottom layers. The basic material determines the design of the watch strap. 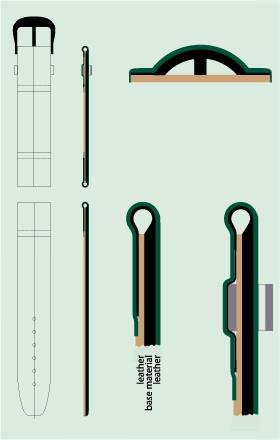 At the turn of the century - in 2000, the KUKI Company dedicated a specially designed leather watch strap to the Millennium. The Drolc brothers (Matjaž Drolc, Gregor Drolc) performed their own song »Basel 2000« dedicated to Basel fair, which was presented live at their Press Conference in Basel.

The company joined forces with Yngvar Petlund, a Norwegian watchmaker, to market a wolfish watch strap as a “Souvenir from Norway”. 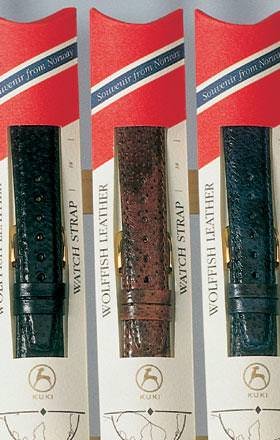 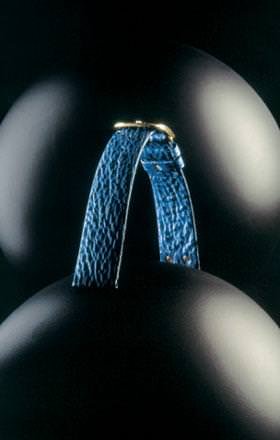 The ArmStrong aramid watch strap was developed as the most exclusive and durable leather watch strap at that time. A series of tests was performed in Swiss and Slovene specialized laboratories and marketing studies were evaluated.

The construction of ArmStrong watch straps is distinguished by a remarkable solution:

the outer layers of fine leather conceal strips of aramid, making the strap totally reliable and resistant to deformation. The contact with both layers of leather is specially reinforced with 18 carat gold-plated stoppers welded to an ultra-slim sheet of stainless steel. Through a series of tests performed at Swiss and Slovenia specialized laboratories, ArmStrong watch straps were evaluated as the most exclusive and durable aramid leather watch straps available today.

A reputed Swiss laboratory assessed KUKI watch straps as being of comparable quality to the finest watch straps in the world. 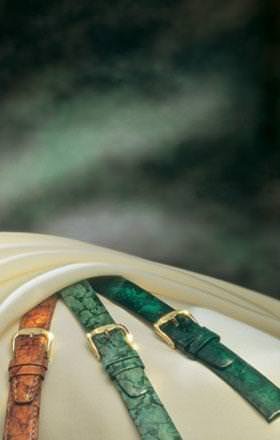 In year 1992 and in years after, the KUKI company made an important contribution to Slovenia’s adoption of the CITES Convention.

At the time they established the company, Franc and Alenka Drolc decided to pursue a company development strategy oriented towards high-quality products. 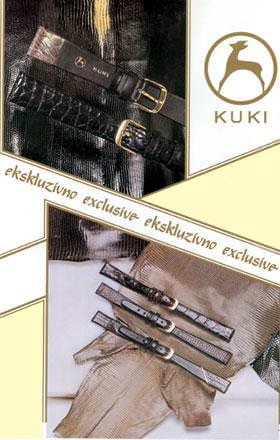 In year 1967, the KUKI brand was presented for the first time. Leather straps have been offered in a specially designed package. 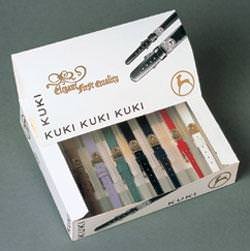