The Japanese high-tech brand launched a series of innovative models at Baselworld 2016. Get ready, here they come!

THE G-SHOCK MR-G, A BRILLIANT FINISH MADE WITH JAPANESE TRADITION

A 20th anniversary model to commemorate the original launch of the flagship MR-G series in the G-SHOCK line, the new MRG-G1000HT explores the theme of tsuiki1, a traditional Japanese metalworking technique. Casio designed the watch in collaboration with a third- generation master artisan in the field, Bihou Asano. A limited run of 300 watches will be sold worldwide. 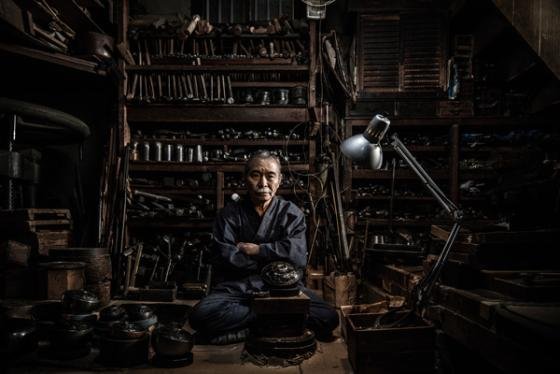 The MR-G series others the ultimate in tough watch design. It combines a sense of quality evoked by finely finished titanium with the distinctively solid feel of G-SHOCK, which conveys its shock-resistant performance. MR-G has gained popularity among adults who want to enjoy a G-SHOCK for many years to come.

Casio has boldly combined practicality and beauty under the theme of tsuiki in the design of the new MRG-G1000HT, while also realising the MR-G concepts of extreme toughness and highly refined elegance. In collaboration with Bihou Asano, Casio has produced a watch with a stately appearance and a beautifully hammered finish achieved through meticulous workmanship. Asano is a master tsuiki artisan who has created works for the Kyoto State Guest House and participated in restoration work of items designated as Important Cultural Properties in Japan. 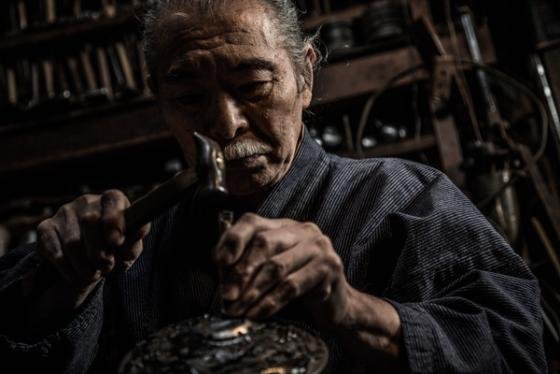 For the bezel and the band, Casio produced a distinctive lustre by applying a special Japanese oboro-gin (silver- grey) finish traditionally used for sword accessories and ornaments. On the screws and buttons, the watch also features an akagane (copper-colour) finish, which was formerly used to give Japanese traditional armour and handicrafts their distinctively deep brilliance. Learning from these traditional metalworking techniques, Casio  has given the entire MRG-G1000HT a distinguished and attractively brilliant finish worthy of its status as a 20th anniversary model, indicated by a metal plate at the 10 o’clock position engraved with “20TH LIMITED” and a serial number inscribed on the back case. 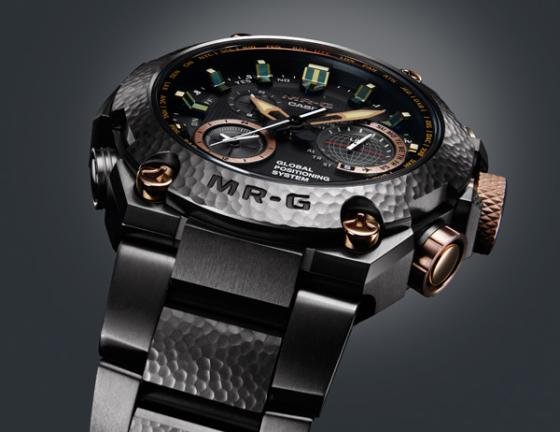 Like the MRG-G1000 model it is based on, the new MRG-G1000HT comes with an advanced timekeeping system that receives both Global Positioning System (GPS) satellite signals and radio wave time-calibration signals, and features Dual Dial World Time, which displays the time in two cities simultaneously.

Inspired by the mysterious beauty of the exosphere (the space between the Earth’s atmosphere and outer space), the OCW-G1100S is a new addition to the OCEANUS, designed to capture the essence of elegance and technology. It features solar and GPS Hybrid Wave Ceptor technologies. A limited number of 200 watches are being released worldwide. 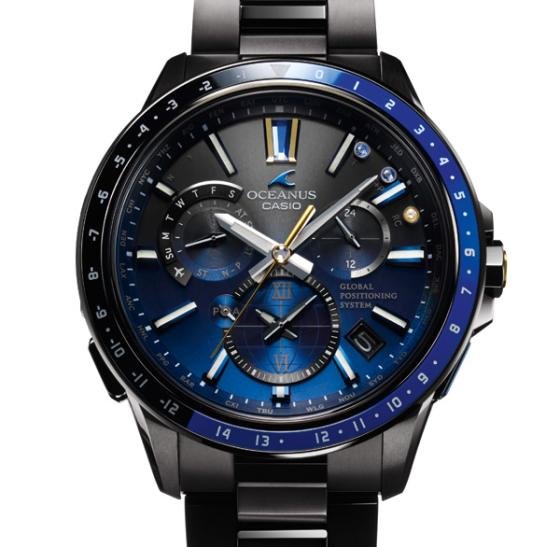 OCEANUS is a line of solar-powered, titanium case and band with sophisticated design and advanced functionality: the previous models (OCW-G1000 and OCW-G1100) were both equipped with GPS and standard time signal reception technology, giving users the correct local time wherever they are. A further evolution of the line, the new OCW- G1100S’s design captures the deep blue mystery of the exosphere as it transitions into the blackness of outer space. the right side of the two-colour moulded ceramic bezel, which indicates time zones ahead of Coordinated Universal Time (UTC), is accented in blue, while the left side, indicating time zones behind UTC, is rendered in black. The indicator in the two o’clock position represents stars shining through the exosphere, and is realised using recrystallised blue sapphires and natural diamond. The 12 o’clock index marker also features a large recrystallised blue sapphire, evoking a satellite motif. In addition to a natural diamond set on the second hand axis in the centre of the dial, the watch case and band features a DLC coating, giving the new model a luxury finish. The new OCW-G1100S not only includes solar and GPS Hybrid Wave Ceptor technologies, it also comes with a Dual Coil Motor, which enables the watch hands in the inset dial at the 6 o’clock position to move at high speed both clockwise and anti-clockwise. As a result, the time shown on the dial can change quickly whenever world time functions are used. Moreover, the speed of the moving hands is regulated, producing an interesting effect and adding to the wearer’s enjoyment. This premium watch, produced using the sophisticated manufacturing technologies of the Casio Yamagata Factory in Japan, combines a luxurious look with high quality and practicality.

A G-SHOCK MT-G TO TREASURE 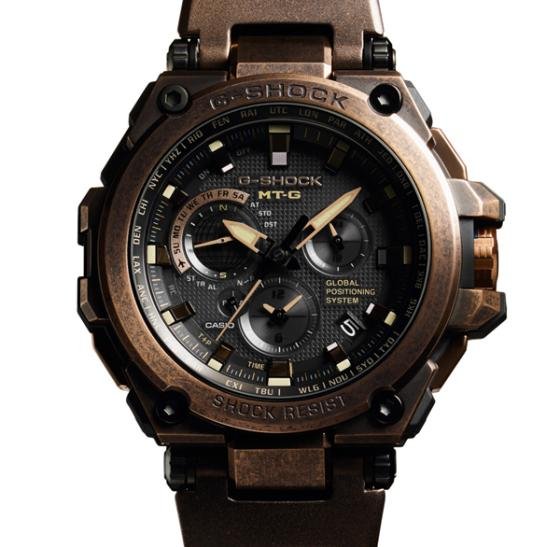 Built for long-term usage even in harsh environments, the MTG-G1000AR, a new model in the MT-G series with a tough and elegant look, is designed to look better the more it is worn! MT-G watches offer a distinctive combination of metal and resin to give a refined appearance as well as outstanding shock resistance. Among models in the line-up, the MTG-G1000D, released last year, comes with the company’s hybrid time-keeping system for receiving both Global Positioning System (GPS) satellite signals and radio wave time-calibration signals. The MTG- G1000D has been highly rated by global travellers for its ability to display accurate time anywhere in the world, along with its comfortable lightweight resin construction and attractively refined metal finish.

Casio used the MTG-G1000D as the base model for the new MTG-G1000AR. Designed with a “sunken treasure” motif, this special model has been made to withstand harsh environments without ever going out of style – a distinctive G-SHOCK feature. Casio finished the surface with rose-gold ion plating, added a layer of black ion plating, and then stripped of some of the black ion plating to produce a finish with a well-worn vintage appearance. It also used a matching hue of rose gold to colour each of the glow-in-the-dark minute indicators and hands, as well as the inset dial at the 10 o’clock position. In all of these ways, the watch is inspired by and designed to evoke sunken treasure, down to the last detail.

All of Casio’s premium lines, i.e. Oceanus, MR-G and the most advanced G-Shock models, in particular the analogue ones, are made in Yamagata, the “mother factory of Casio.” Yamagata is vertically integrated, from the moulding of movement components to assembly and casing-up.

As the movement is considered the heart of a watch, Yamagata Casio’s core technologies were brought together to create the Yamagata Japan Movement, which has been installed into Casio’s analogue watches, including the most advanced models. 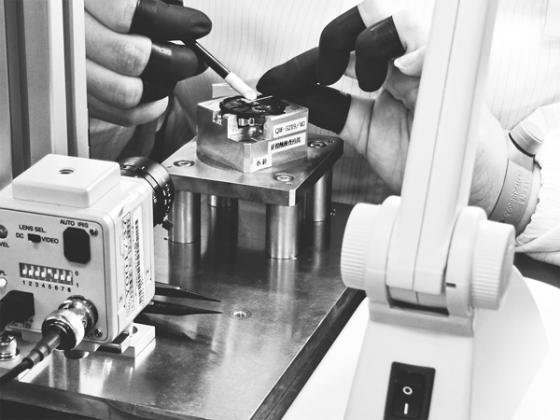 Yamagata also houses the Premium Production Line, which carries out the production and assembly of high- end models. Arranged in a “G” shape, the Premium Assembly Line comprises 14 stations staffed exclusively by award-winning artisans who see to the especially complicated casing-up of these multifunction watches. Special attention is given to checking the precision of the position, height and operation of the multiple hands (five stations are devoted to this). 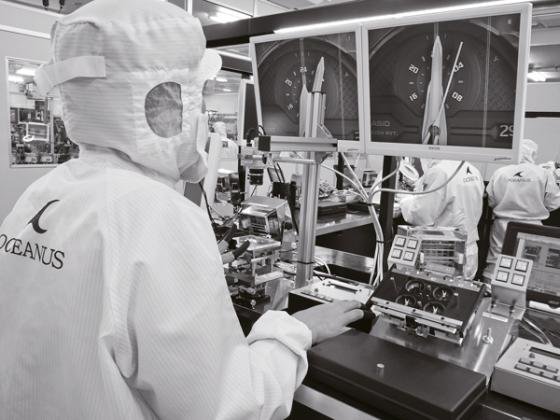 Fully utilising their professional skills, these watchmakers are attentive to the smallest details to perfect a high quality product. Thus, Yamagata Casio produces all advanced analogue movements and high-end models, fully integrating the entire process within the facility.

1 Tsuiki is a metalworking technique in which a sheet of metal is hammered out thinly into a three-dimensional shape. Historically it was used to make copperware and other metal containers, as well as armour and helmets, which needed to be made both thin and strong. Nowadays, the technique is applied to produce components for railway carriages, aircraft and other items.