Aerobatics and the art of watchmaking have quite a lot in common: technology, precision and innovation for example. What better reason for the sponsoring partnership between Glycine Watch SA in Biel and the aerobatics pilot Pascale Alajouanineı At the end of July the Frenchwoman defends her title in the European Championships in Kaunas, Lithuania – sporting her Glycine AIRMAN 9. 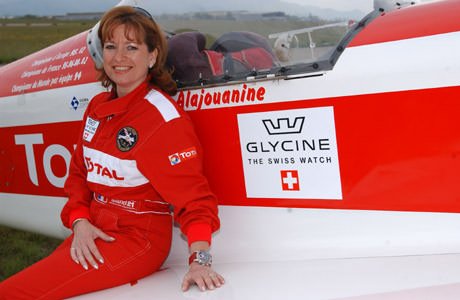 Aerobatics and the art of watchmaking have quite a lot in common: technology, precision and innovation for example. What better reason for the sponsoring partnership between Glycine Watch SA in Biel and the aerobatics pilot Pascale Alajouanineı At the end of July the Frenchwoman defends her title in the European Championships in Kaunas, Lithuania – sporting her Glycine AIRMAN 9.

On the 90th birthday of Glycine Watch SA the aviator watch pioneer from Biel enters into a special partnership: it is sponsoring the aerobatics pilot Pascale Alajouanine for the next three years. “Our new ambassadress is perfect for us“, exults Katherina Brechbühler, CEO of Glycine Watch SA in Biel. “ This appealing Frenchwoman is the ideal representative of
our values such as precision and technology.“ These values play a central role in the flying profession – particularly aerobatics – and the same applies in the life of Pascale Alajouanine who lives in Boulogne near Paris. She gained her wings over 20 years ago in a CAP-10 and soon afterwards enjoyed her first professional success. Today she flies a CAP-232 and is the reigning European Champion, seven times French Champion and World Team Champion. In addition to her sporting career she has devoted her life to precision and technology, working part-time as an optician. “During the aerobatics season from May to September there is a little less time left over for that“, she says. 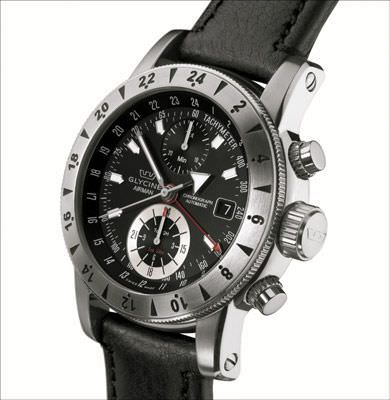 Glycine’s new AIRMAN 9 is especially appropriate for the “Airwoman“. Pascale Alajouanine has been wearing this exceptional and striking aviator watch, which combines a chronograph and a world time watch, since it was launched at this year’s Baselworld and is
highly enthusiastic about it. “The chronograph helps me to plan and maintain navigation times, which is helpful because in aerobatics there are strict time limits“, she explains. “Thanks to the world time watch even during competitions in other time zones I can stay in touch with home.“
Glycine is keeping its fingers crossed for Pascale Alajouanine in her ambitious goals!


Glycine: the innovative aviator watch pioneer
In 1953 Glycine Watch SA in Biel/Bienne introduced its first world time watch with AIRMAN 1. This special model is distinguished by its 24-hour watch movement and was designed for pilots as well as the growing numbers of jetsetters. From one day to the next it
became possible to tell the time in several time zones from your wrist. Since then, Glycine has continued to develop the tradition of the aviator watch and launched a world first at Baselworld 2002: AIRMAN 7 with three independent movements in one watch and boasting
an exceptional diameter of 53 millimetres. At a glance it displays four time zones. The now launched AIRMAN 9 is a perfect combination of a complete chronograph function and a world time watch. With this timekeeper, Glycine is once again in the spotlight as a manufacturer of innovative watches. Every AIRMAN 9 is numbered and engraved on the oscillating weight with the image of a star-engined aeroplane. Equipped with an ETA automatic movement calibre 7754, the AIRMAN 9 is water-resistant to 200 metres and costs about CHF 4000.-.
The family company, founded in 1914 by Eugène Meylan, is co-owned and managed today by Katherina Brechbühler who is responsible for design, and her father, Hans Brechbühler.