Watchmaking enthusiasts and the many admirers of Albert Einstein have been eagerly awaiting the sale of this historic timepiece. On 16 October 2008 in New York, Antiquorum auctioned a Longines gold watch dating from 1929 that had belonged to Albert Einstein and was probably given to the famous physicist in Los Angeles in 1931. Albert Einstein, whose discoveries revolutionised our perception of time, frequently wore this sober, elegant timepiece. 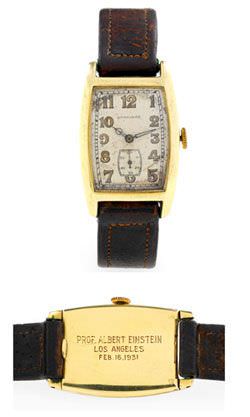 The watch was acquired for the total sum of USD 596,000. It has thus become the brand's product that has fetched the highest price ever at auction. It was sold for far more than a magnificent pocket-watch that was bought at auction in 2005 for the Longines Museum for the sum of CHF 74,000.

The proud new owner has purchased a magnificent watch that is a symbolic part of the greatest spirit of the 20th century.

Longines would like to congratulate the new owner of the Albert Einstein watch. Longines is especially proud of this ambassador of genius, who incidentally owned a second watch made by the same manufacturer. Albert Einstein indeed owned a Longines pocket-watch dating from 1943 which is now in the History Museum in Berne (Switzerland).