Following its worldwide success, the Meccanico dG is now being offered in a new exclusive version. A veritable technical masterpiece designed by Fawaz Gruosi and a treasure-house of virtuosity, this exceptional piece displays the time for two time zones on a double analogue and mechanical digital display. For the first time, these are in white rather than green or gold. 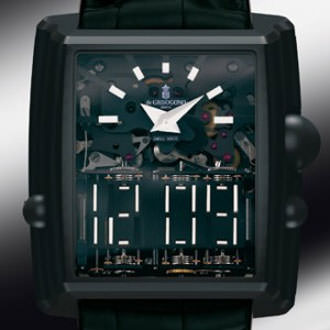 The timepiece, which won the Grand Prix de l’Horlogerie in 2009, is a veritable interplay of contrasts with hourmarkers and micro-segments decked out in white to offset the watch’s dominant matt black appearance to greater effect. The dark alligator strap sets off a design that is both understated and impulsive. An exclusive foretaste of a special collection to be unveiled in its entirety at Baselworld.