After having won in 2010 the trio of masters tournaments that are Roland Garros, Wimbledon and Flushing Meadows at the wrist of Rafael Nadal, Richard Mille has now developed the RM 035, a by-product with a movement weighing just 4,3 grams.

The manual winding, skeletonized caliber RMUL1 beating at the heart of the RM 035 represents the first manual winding movement in the Richard Mille collection to have Chronofiable® certification. 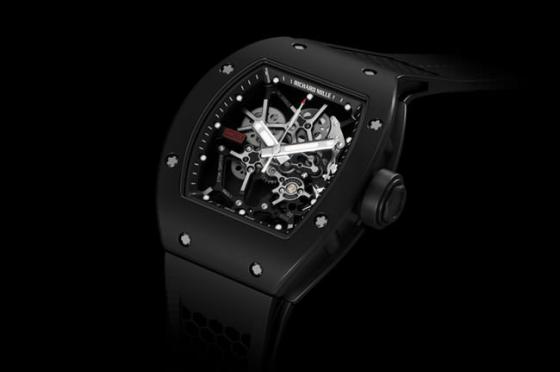 The Chronofiable® test, developed at the beginning of the 80’s by the CCF SA (centre de contrôle de la fiabilité de l’horlogerie Suisse, taken over in 1985 by the Laboratoire Dubois SA), was devised to expose timepieces to an accelerated ageing test simulating over 21 days, the equivalent of 6 months effective wear. This is achieved by the execution of a long series of tests such as the initial monitoring of the movement functions, an additional rate, the amplitude test taken at two temperature levels (0°C and 50°C), the monitoring of the power reserve and the winding velocity. Included in this artificial ageing cycle test are extensive linear and angular accelerations as well as some 20,000 shocks ranging from 250 to 5500 m/s2 (9.81 m/s2 = 1g). The last step is a final monitoring phase applying the same elements than during the initial monitoring.

Conditions like these attest unequivocally to the ability of the RMUL1 caliber to withstand an array of extreme conditions without experiencing any effects on its performance.

Chronofiable® is a registered trademark belonging to the Laboratoire Dubois SA.