No time to lose with the Neuhaus Janus DoubleSpeed

No time to lose with the Neuhaus Janus DoubleSpeed

Young German watch brand Neuhaus has developed a watch that will appeal to those who battle with the acceleration of time. Rather than completing a revolution every twelve or perhaps twenty-four hours, as is the case with most mono-hand timepieces, the hour hand on their new “Janus DoubleSpeed” model practically whizzes around the dial once every six hours.

This double speed means that the dial can appear as just a jumbled mass of numbers at first sight, but closer inspection reveals an orderly arrangement of six double hour markers, each six hours apart. As the brand quite correctly states “you will normally know whether it is just before four o’clock or a few minutes to ten.” 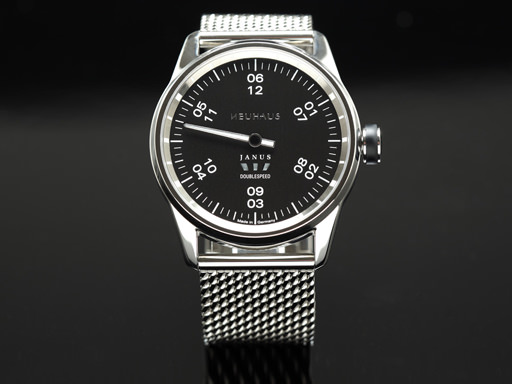 The faster speed and fewer hour markers allow for a doubling in the size of the scale, which Neuhaus claims results in better legibility. To compensate for the lack of a seconds hand, a small aperture just below the centre of the dial reveals a rotating black and white disc that is attached to the modified Unitas 6498 calibre, so that the wearer can check whether the hand-wound movement is running. The movement can also be admired through a sapphire crystal case back.

The two-faced Roman god Janus was chosen for the name of the watch because of its excellent night-time readability. Only 99 units of this black dial version make the watch a very strictly limited edition.