The MoonMachines are part of MB&F’s ‘Performance Art’ series – those very special occasions, when the brand asks an external artist or designer to reinterpret one of the existing Machines. You might remember the HM2.2 ‘Blackbox’ designed with Alain Silberstein, the Boucheron JWLRYMachine, or the ‘Only Watch’ unique pieces MB&F co-created with various artists.

Each of those special projects was very enjoyable for the brand, but the MoonMachines with Stepan Sarpaneva was probably the smoothest collaboration of all, thanks to his great talent and personality (according to Maximilian Büsser). 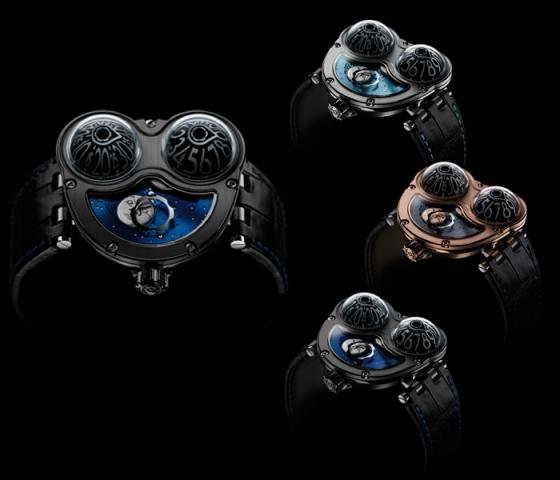 A true watchmaker, but not a conventional one, Stepan worked with the very best in Switzerland for 10 years before returning to his native Finland. His horological skills are matched by his acute sense of design. If one’s familiar with his timepieces, one will recognize his signature design element: an iconic moon face.

Sarpaneva’s DNA has been injected in this new series of Machines. To create MoonMachine, Stepan has reconfigured HM3 Frog by 90° and added his iconic moon-face moon-phase indicator complication set in a scintillating firmament of northern stars.

The twin hand-finished moons indicate the moon-phase through a Korona-shaped aperture. The 22k gold and steel northern sky adds a stunning background: the stars are laser-pierced, allowing light to reflect from the movement underneath. And there’s a twist: this star-filled sky is in fact the revolving rotor, bringing life to the MoonMachine as it generates power for the movement.

HM3 Frog was chosen as the MoonMachine platform because the large movement opening in the dial side provides space for the watchmaker to play – and the bulbous indication domes of the Frog are reminiscent of how science fiction buffs have long imagined habitable domes on the Moon.

MoonMachine comes in three Limited Editions of 18 pieces each, in titanium, black titanium and red gold.