First shown in January 2012 at the Cité du Temps in Geneva, then presented in a succession of the largest cities in Asia, the United States and Europe, this exhibition looks back over the history and the mysteries of the first wristwatch. Part of the finest pieces of the contemporary “Reine de Naples” collection will be on show, brilliantly illustrating the ingenuity and elegance of Breguet’s timepieces. 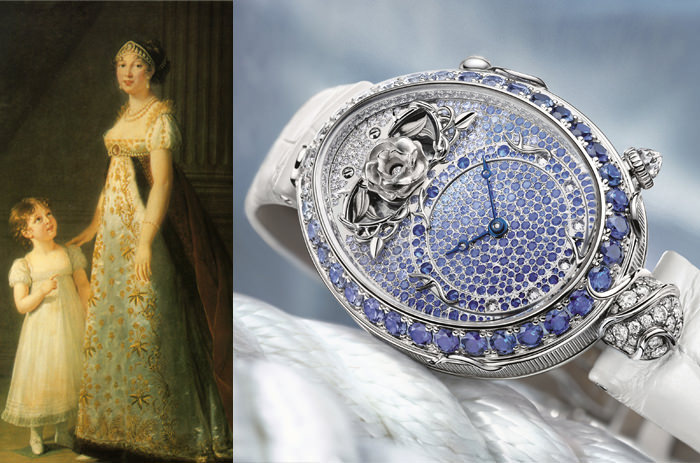 On 21 December 1812, Abraham-Louis Breguet put the finishing touches to an extraordinary timepiece, commissioned from him in 1810 by a woman of equally remarkable character, Caroline Murat, Queen of Naples. A fervent admirer of Breguet watch creations, Napoleon Bonaparte’s younger sister was in the habit of making regular purchases from her favourite watchmaker. In fact she ordered a total of no less than 34 watches and clocks from A.-L. Breguet, including the first ever wristwatch in the history of horology. As a tribute to this, the most innovative timepiece of its day, and in memory of the woman who commissioned it, in 2002 Montres Breguet launched an exclusively feminine collection that took its inspiration from the original watch first ordered by the Queen of Naples, and officially recorded as Watch No.2639.

The No.2639 model made for Caroline Murat has not yet been found and thus remains an enigma. It is not mentioned in any private or public collection. Nonetheless, the Breguet company archive have made it possible to retrace this historical retrospective of the unprecedented creation of this unique wristwatch.

200 years after delivery of the first wristwatch and 10 years after the launching of its “Reine de Naples” collections, Breguet retraces the steps of its emblematic timepiece, and presents a watch and high jewellery set that have been specially created for this double anniversary.