Slyde models – which adopt the basic intuitive technologies principles and exalt the world of 21st century watchmaking – are available from the most reputed watch boutiques. Since this winter, they are available with three analog movements (in addition to a series of personalized displays), each composed of seven independently displayed complications: time, date, timezone, week, moon phase, chronograph and countdown timer. This eclectic collection that allows users to navigate using the touch screen of their watch, enables customized time read-off in any circumstances.

Like the Slyde itself, the Slyde Shop is designed to evolve constantly. It notably gives Slyde owners access to ten or so variations on the original movements – Roller and Flip-Clock Engine – in a variety of colors, some of them free of charge.

By dematerializing movements, thereby creating “devices” with surrealist digital gears and uniting them within a single model thanks to the exceptional concerted talents of Jorg Hysek and Fabrice Gonet – Slyde is creating tomorrow’s watches today.

The Swiss brand has just completed development of a movement with a virtual tourbillon, a digitalized mechanical marvel! This new display features the seven functions shared by all Slyde movements. The care devoted to its finishing creates a standout vintage effect. 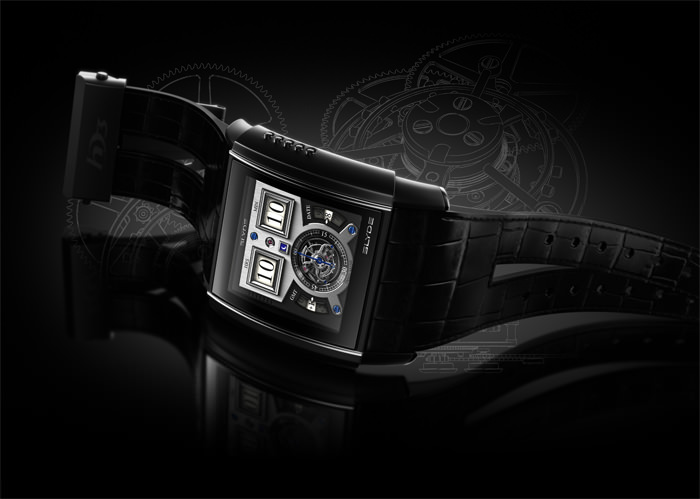 As far as the time indications are concerned, the hours and minutes on the main dial are shown on jumping discs appearing through large apertures. The discreet day/night display is centrally positioned. Meanwhile, below the seconds hand, the tourbillon performs one complete turn in one minute, remaining in motion even when the animation is not activated.

The other dials feature a sphere that is concealed to varying degrees by a mobile sapphire dome rotating around it, thereby indicating the moon phases. The calendar subdial features a retrograde day display. The chronograph function is displayed on two 30-second dials with retrograde hands, with a hundredth of a second indicator between them.