Sotheby’s Geneva is pleased to announce that this spring, it will join forces with Audemars Piguet to support the Leo Messi Foundation. The No.10 Royal Oak Chronograph Leo Messi will be presented in Sotheby’s Geneva auction of Important Watches on 11 May 2013 and the entirety of the proceeds from the sale will benefit the Foundation of the man widely regarded as the world’s best football player today.

Worn by Leo Messi in the photograph below and designed with his collaboration, this 41 mm chronograph in platinum is the 10th watch produced by Audemars Piguet in a limited series of only 100 pieces dedicated to the player. Lot 110 in the sale - as a nod to Leo Messi’s number 10 FC Barcelona and Argentina shirts, the watch will be accompanied by an Argentina national team’s number 10 jersey autographed by Leo Messi and the original drawing of the watch signed by the footballer and Audemars Piguet’s Chief Artistic Officer, Octavio Garcia. The successful bidder will also be given the chance to meet the football legend in person in Barcelona. 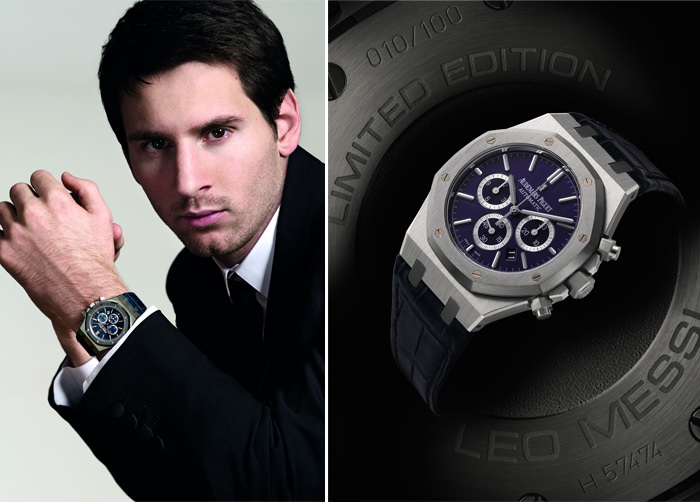 Commenting on the forthcoming sale, Geoffroy Ader, Head of Watches, Sotheby’s Europe, declared: “It is an immense privilege for Sotheby’s to handle the sale of the No.10 Royal Oak Leo Messi and thereby contribute to the action of the Leo Messi Foundation. Watchmakers and sports people have in common a constant search for excellence and authenticity and we are delighted to be able to join forces with Audemars Piguet and Leo Messi who embody these values in their respective fields.”

Leo Messi said: “I bring my full support and express my sincere gratitude to every initiative contributing to the Foundation’s projects. The funds raised will allow us to rehabilitate the Children Public Hospital in my home city of Rosario”.

“In football as in watchmaking, talent and elegance mean nothing without rigour and precision. I am proud to have played a part in the creation of this Royal Oak limited edition. I immediately fell in love with its powerful and distinctive design. In addition, what I like about Audemars Piguet is the respect for traditions, the uncompromising quest for quality, the sense of innovation and creativity”.