The brainchild of Nicolas Dehon, who had the idea when playing with his ticket on a train journey, the escapement has at its heart a silicon filament that is six times thinner than a human hair to harness the physical phenomenon of buckling. To experience this phenomenon for yourself, simply hold a business card vertically between your thumb and forefinger, compress it slightly, then push at the centre of the bend. The card will snap back in the opposite direction. This is exactly how the filament in Girard-Perregaux’s constant escapement works: the filament is held in a not-quite unstable state, with the result that the slight micro-impulses given by the balance wheel are enough to cause it to snap from one state to another and move the balance. The result is a force that is both instantaneous and constant over time—over the period of a week, in fact, since the arrangement of twin barrels, each containing two springs stacked in series. 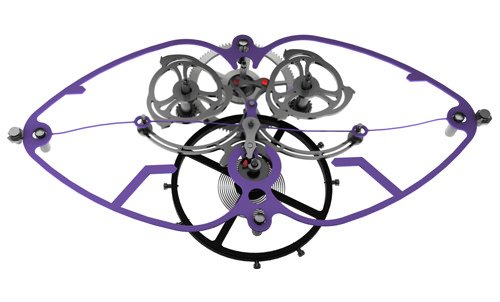 One of the main differences between the concept first presented and the production series escapement is that the twin escape wheels each feature three wheels rather than six, which equates to an operating frequency of 3Hz (21,600 vibrations per hour) for the movement. Two patents have been filed for this escapement, one for the “blade” (the filament), which was filed in 2008, and another one for the use of limit stops in a flexible system. 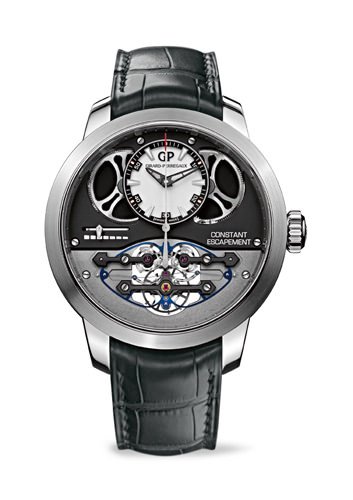 The first series watch to feature this escapement naturally gives the innovative mechanism top priority in its display, with the entire bottom half of the dial opened up to show the continuous undulation of the microscopic filament. This ensemble is rather fittingly held in place by the distinctive three bridges that unmistakably identify this new model as a high-end Girard-Perregaux timepiece. A smaller, off-centre dial at 12 o’clock shows the time, flanked by the two barrels that ensure the one-week power reserve. A discreet linear power reserve at 9 o’clock completes the picture, which is framed in an 18-carat white-gold case with black alligator leather strap.