Most of the 22 lots achieved multiples of the high estimates. Bidding for the top lot of the sale, a spectacular “The Magpie’s Treasure Nest Clock” by Patek Philippe (Est. HK$3 – 5 million / US$380,000 – 640,000 / see picture below), started at HK$2.5 million, with intense bidding from at least four bidders on the phone and one in the room. An online bidder came in at HK$9.2 million and contested with the in-room bidder all the way until the latter placed the winning bid of HK$15 million (HK$18.04 million / US$2.31 million with premium), concluding the notable sale amidst thundering applause. 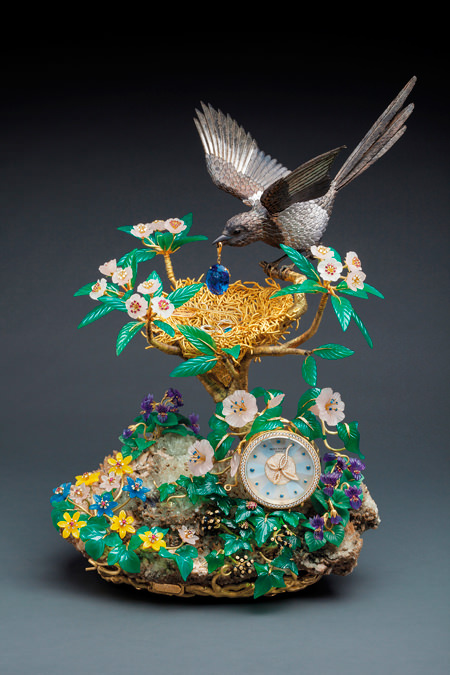 Tim Bourne, Sotheby’s Worldwide Head of Watches, says, “Today’s sale of Important Watches, including Magnificent Clocks from an Important Private Collection, achieved The Highest Total For Any Sale Of Timepieces By Sotheby’s Worldwide, as well as The Highest Total For Any Sale Of Timepieces In Asia. The core of the sale was an extraordinary fresh-to-the-market private collection of decorative modern clocks by Patek Philippe, Cartier and Daniel Roth and others, of a scale and quality unequalled on the market, which boasted beautiful design, impeccable craftsmanship and creative use of precious materials. From the time the catalogue came out and over the course of the exhibition, it was clear that collectors responded to these remarkable works of art and this evening there was intense competition: each lot provoked lengthy bidding battles among multiple bidders from a global pool of competitors, which resulted in a total for the clock collection of HK$124 million / US$15.9 million, more than three times the pre-sale estimate of over HK$35 million / US$4.5 million, and an unprecedented six lots selling for more than US$1 million.”

Charles Tearle, Head of Watches, Sotheby’s Asia, says, “We are very pleased with the results of today’s sale, which demonstrate the continued strong bidding response for fresh-to-the-market, exceptional timepieces as well as the continued expansion of Sotheby’s watch sale in the region. Building on the astounding results last Autumn we were able to source a superb and varied selection of carefully estimated and researched timepieces by Patek Philippe, A. Lange & Söhne and Jaeger-LeCoultre and other watchmakers. The top lot among the watches, a Patek Philippe Ref. 3974G wristwatch in white gold, which had been launched in 1989 to celebrate Patek Philippe’s 150th anniversary, was offered in excellent original condition by its original owner, and doubled its estimate of HK$2 – 2.8 million to sell for HK$5.44 million / US$701,651. A Patek Philippe Ref. 5104P wristwatch in platinum and pink gold (est. HK$4 - 5 million) also sold well, achieving HK$5.2 million / US$666,667.”