“Gold. Stadt. Pforzheim. Our companies are worth their weight in gold” – for the first time eleven companies based in the economic region of Pforzheim from the field of jewellery and watchmaking exhibits at Baselworld 2013 under this motto together with the city of Pforzheim and the Federation of German Jewellery, Watches and Clocks. A further 40 companies from Pforzheim and the area also exhibit at the trade fair. 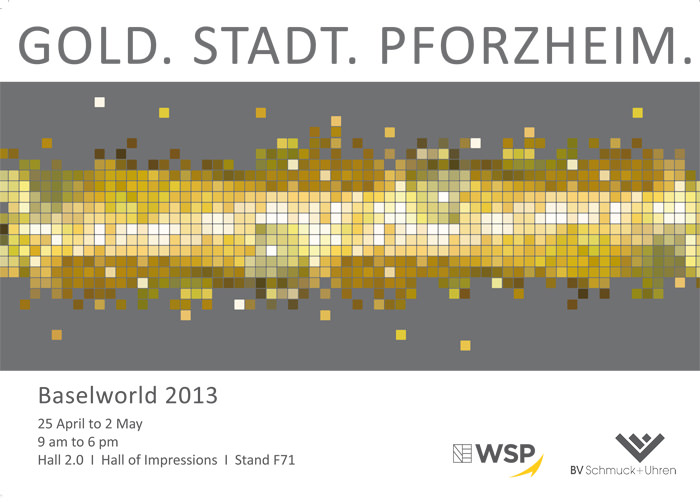 Pforzheim is the German centre of excellence for jewellery and watches with worldwide reputation. A number of reputable companies and associations are based here together with Pforzheim’s goldsmith and watchmaking school and other institutions from the field. In terms of jewellery and watches, Pforzheim stands for historical tradition, quality, creativity and design.

The Pforzheim trade fair stand lives up to the city’s name, the “Goldstadt”: Pforzheim presents itself as being golden, modern and full of economic innovation.

Tradition based on history

Pforzheim’s rich historical tradition speaks for itself. In 1767 the Margrave Karl Friedrich von Baden founded a jewellery and watch factory in Pforzheim – the start of an economic development which has influenced the city ever since.

As a result, since time can remember Pforzheim has been the capital of jewellery and watches in Germany. Numerous well-known firms are based in Goldstadt Pforzheim and produce according to extremely high quality and design requirements.

A secure future based on expertise

Pforzheim has a rich historical tradition, but today is also a base for a number of future-oriented technological fields. Precision engineering and the creative economy based on the skills of the jewellery and watchmaking industry have developed significantly in recent years. They are able to harness the traditional skills available in Pforzheim to promote innovation and creativity and shape the future.

Design and creativity is important to Pforzheim. The design faculty of the applied university in Pforzheim offers an internationally recognised bachelor’s degree on jewellery and everyday objects which promotes creative, young and innovative designers.

Companies worth their weight in gold

Young jewellery designers in Pforzheim are supported by CREATE! PF, an initiative from the city started in 2010 to promote young designers. CREATE! PF organises a European talent workshop every year and presents the jewellery designers at international trade fairs. At the end of 2013, an area of approx. 3,000 m² will be available to house a creative centre at the historic site of the former Emma Jaeger swimming pool with workshop facilities, ateliers, workplaces and a large exhibition