Subjects as diverse as aviation, the panda and the skull are the themes of the three new models recently presented by Richard Mille to coincide with this year’s BaselWorld watch fair. Two models adds a new twist to themes that have already been used in the Richard Mille collection, while a third brings a new theme to the brand’s high-end jewellery pieces.

RM 39-01 AviationThe RM 39-01 aviation watch is an evolution of the RM 039 model and is as such a highly complex pilot’s watch fitted with a flyback chronograph tourbillon calibre. Its fixed and bi-directional rotating bezels provide a wristwatch based version of the circular E6B slide rule that dates back to the 1930s, which can be used to calculate fuel consumption, flight times, ground speed, as well as wind influence, and to convert between the metric and imperial units of measurement. Furthermore, the slide rule can be used in combination with the flyback chronograph to time precisely the travel time between radio beacons when navigating along a predetermined flight path. 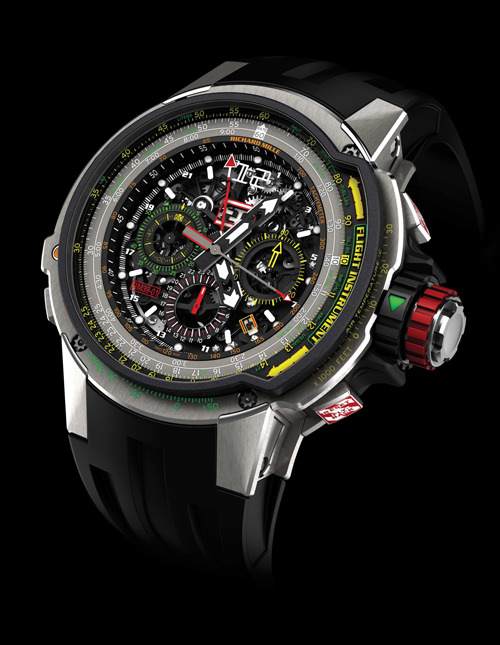 The new RMAC2 automatic calibre used in the RM 39-01, features UTC and countdown functions, a flyback chronograph, an oversized date at 12 o’clock, a month display and a variable geometry rotor. It has almost 620 components and 62 jewels, with a power reserve of 50 hours. In order to prevent any accidental in-flight activation of the chronograph, Richard Mille has also incorporated a locking crown which, by turning the ring, fixes the pushers and crown in place. The green and red markers indicate whether this is deactivated or running.

RM 52-01 SkullThe new RM 52-01 Skull follows in the footsteps of the RM 052 Tourbillon model, which Europa Star presented last year in its interview with Richard Mille. It is the second piece in the Skull collection and, like its predecessor, features a baseplate in PVD-treated grade 5 titanium. But the skull, which is an integral part of the movement and whose jaws hold the tourbillon cage, is finished in 5N red gold and is hand-bevelled. 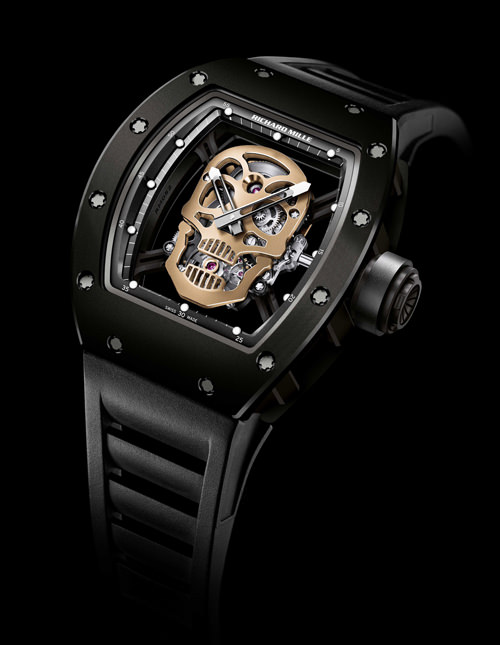 Furthermore, in keeping with the brand’s tradition of using cutting-edge materials, the new case is made of a new composite material called nano-ceramic, which has evolved from the brand’s research into the RM 011 Silicon Nitride model. The resulting material, called TZP, is made from 95 per cent yttrium-stabilised zirconium and is used for the bezel and case back, which is micro-blasted with hand-polished corners.

For the case middle, Richard Mille decided to use carbon nanotubes for their proven ability to protect the tourbillon movement nestled in the centre against impacts. Bonded to a black polymer, the carbon nanotube case middle helps to reduce the watch’s weight.

The RM 52-01 is released as a limited edition of 30 nano-ceramic timepieces. 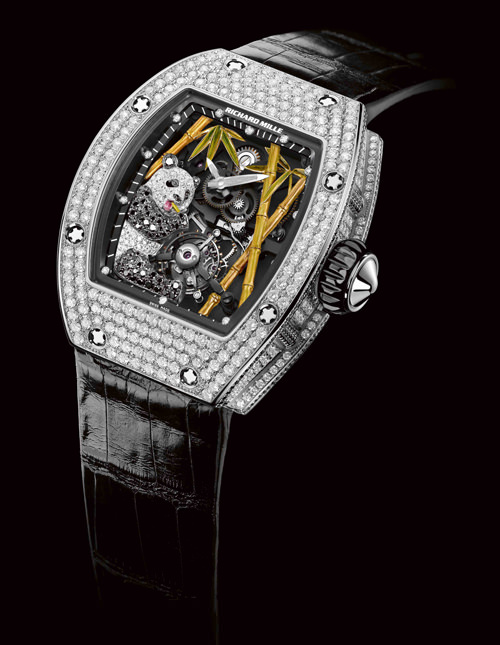 Since it features China’s “national treasure”, it is likely that a number of the 30 pieces in this limited edition will be snapped up by customers in mainland China. The symbolic creature, crafted in 18-carat white gold and entirely set with diamonds and black sapphires, is integrated into the tourbillon and sits in its natural habitat among bamboo leaves hand-sculpted from yellow gold. Unlike the more technical Richard Mille models for gentlemen, the RM 26-01 Panda has a fittingly ethereal baseplate machined from black onyx, which is said to absorb negative energy and bring great emotional stability to the wearer. Black Onyx is considered to protect against negative thoughts and incarnate balance and inspiration.

The RM 26-01 tourbillon is a limited edition of 30 timepieces in 18-carat red gold and white gold.